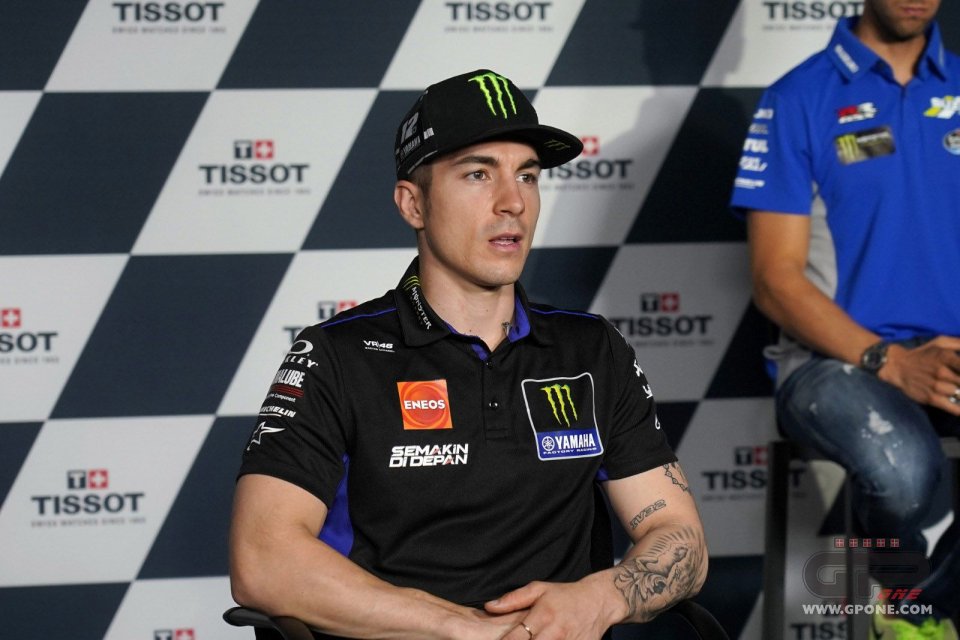 The last time Maverick Vinales started a season by winning the opening round was 2017 but he did just that on Sunday, conquering the first race of 2021 in Losail and showing Yamaha that it did the right thing in focussing on his talent for another two years. The Spaniard was the protagonist of a perfect race on Sunday, duelling in a very aggressive way with the Ducati riders and then powering away for a solo victory.

The Losail race was also the first race for Maverick as a married man, the first as a future father and also the first without sharing the Yamaha Factory box with Valentino Rossi, a figure who certainly has always had a long shadow in the garage of the Iwata manufacturer.

"Basically I think my life is splendid - commented Vinales - I know what I have and it is important to know that a part of my life is going so well. I feel like I have the best team in the world on the track and the best person in the world who takes care of me at home. This is undoubtedly the most important step I have taken compared to 2020. I think last season was very hard for me, just think about what happened to me in Austria. These are things that make you think a lot, but my dream remains the same, that is to be a champion. Finding stability at home, as here in racing, is very important. I asked Yamaha for stability in the team and now everything is working perfectly. Not much has changed with Valentino's departure. In the end he is simply in the box next to me. Valentino is a big part of Yamaha, he will be for all his life. Not much has changed. "

Do you think there is anything you can improve on the bike ahead of Sunday?

"Nothing is ever perfect, it is very difficult to be on track. We have to improve, do something different this weekend. Not everything is the same in the two successive weekends. We know we have great potential, but we also know we can improve and we have to do it. There are details to sort out to be really perfect. I think everyone will take a step forward and we will work to do the same. Improving is always very important, I think the guys in the top ten will be even faster. In the first race the most important thing we learned is the behaviour and wear of the tyres in the race. This will certainly be the area in which we will work the most ".

Vinales: "I want to wait for Portimao to say how much the M1 has really improved"

Your M1 looks much more competitive than in 2020. Have you noticed a clear step forward?

"It is early to say how much the M1 has really improved. We first have to race on other tracks to see if this bike really has the potential to fight at the top until the end. We have found something that allows it to work better, about this there is no doubt. On Sunday I was also able to make several passes on the straight and it didn't happen often. The really important thing is that although our Yamaha has strengths and weaknesses, we always know better how to work and improve them. In any case it is too early to say that we are much stronger. In Portimao we suffered a lot last year and that could be a good test for us. I have complete confidence in my bike, but I want to stay calm. I know that there will be tracks where we will have to push harder than ever, because maybe they won't be perfect tracks for the M1. But I have full confidence in her, I just don't want to let myself go too much. The only thing that counts now is the second race in Qatar. "

You're back first in the rankings again, a situation you haven't experienced for years. How do you feel?

"Being first in the standings does not change things for me, I will tackle the race as I do every Sunday. It will be important not to make mistakes at the beginning. I like to be in front of everyone, because it puts pressure on my shoulders but positive pressure. We’ll see, for sure winning has changed many things but it won't change my speed on Sunday. "

Last season you had some problems with the Michelins. What impression did they give you in this first race?

"It's hard to imagine how the tyres can behave elsewhere. We have a lot of grip here but I think things will work well elsewhere as well. I have a lot of confidence with the front, which I hope to take with me to the next track. We just have to stay calm to be able to express our potential also on tracks where in 2020 we suffered for the tyres ".

You didn't have a great start, but you recovered quickly. This was a big change from the past.

"My start was not bad, we checked the data and it was great. The problem is that our rivals are just fantastic from this point of view. Of course we still need to improve and for example the device that lowers the front at the start makes a huge difference. We saw the Ducati start much better than 2020 and I know Yamaha is also working hard to help us have the same thing on the bike as soon as possible. Starting in front allows you to better control the tyres, to consume them less. But when you start from behind you have to squeeze the tyres harder to overtake and that makes a huge difference. "

Marc Marquez will be back in the races soon. How does this make you feel?

"Nobody knows when Marquez will be back. But I think it's a great thing for everyone, for the show. But I'm focused on my things, on being fast this race weekend. All the riders want the same thing when they go out onto the track. "

Quartararo: "Last week I made too many changes, this time I will touch the bike less"

Fabio Quartararo did not produce a dream race at Losail like he did last year in Jerez. However, the Frenchman did not finish very far from the top and showed he was capable of realizing his potential without collapsing after the significant drop in grip accused by his tyres in the race. He would have liked to have been on the podium alongside Vinales, but this appointment seems to have simply been postponed.

"Honestly for me it was a very hard race - said the Frenchman - At first when I caught up with Miller I thought I had a really fast pace, but then the tyre collapsed and I decided to slow down. I was sliding a lot and I think how much I learned last year in this situation helped me a lot. In 2020 when I had this problem I always lost a lot of positions, on Sunday I managed things better by improving for example in braking. In some points it was really difficult in the race, but now we have a lot of data to solve that problem ".

Do you think the M1 has taken a clear step forward over 2020?

"I think we have some really strong points. Our bike in some points of the track is really strong, there are corners where we can open the throttle before everyone else and this helps us later. I feel good, also because I know I can do more aggressive overtaking. The bike is very stable in braking, I feel the front really good this year. I think this is a very positive aspect for the season. In my opinion the M1 will be fast everywhere. Last week we did maybe too many changes during the race weekend, this time I will touch the bike less. I think we will be fast from the start, I don't think we will change the base of the last race too much. I think it is enough to be in front. "

This year Zarco could often be among the top riders. Two Frenchmen fighting each other for the podium…