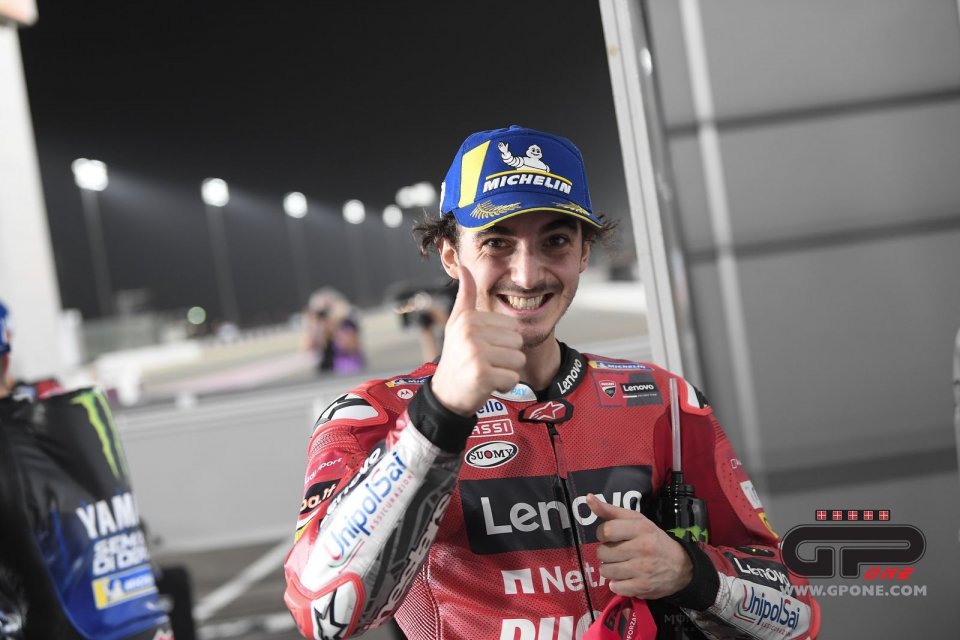 Pecco Bagnaia proved to be a man of his word. Yesterday he said that in qualifying it would be possible to get down to 1’52; he was right but he was the only one to do it. To be precise, he stopped the clock with a time of 1’52.772, which is 4 tenths faster than Marquez's previous record.

A perfect lap therefore, the first step on the road just begun by the Italian in the factory Ducati team.

"It's true, I said it was possible, but when I saw that time I was almost incredulous - he admitted - It's incredible, I didn't expect it and it's the best possible way to start this new chapter."

You also gave a tow to Valentino…

“It wasn't planned, we just found ourselves together. Even though he was behind me I decided to push hard, because when I have to give 100% I prefer not to have anyone in front and do my own lines. However, the strategy worked for both of us, maybe we will do it again (laughs) ”. 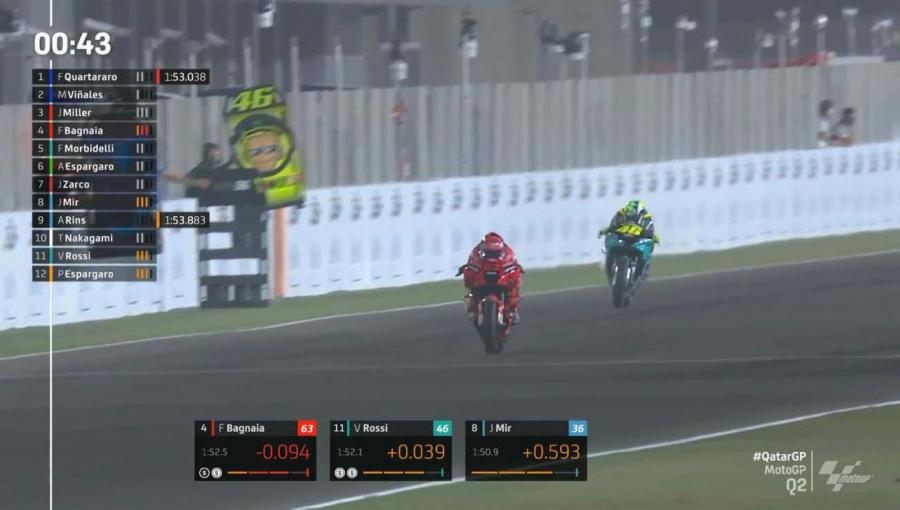 After pole position what do you expect for the race?

“It will be a group race and well-balanced against the Yamahas. They are strong in the two sectors in the middle of the track and we are in the last, thanks to our speed. So I expect a very balanced fight between us”.

How big will that group be?

“I hope it's small, actually (laughs). However, if we look at the times, Ducati, Yamaha and Suzuki have a similar pace. In FP4 I had some problems, but I used a tire from yesterday and I suffered from the heat. However, I believe that the pace in the race will be higher ”.

Are you thinking about the tires?

"You will have to be smart, you will need to hold back at the beginning to not burn up the tires. The hardest thing will be to be consistent and then be able to make a difference in the last laps ”.

So you’re not thinking about getting away?

Could the wind be another rival?

"It might be a problem, they say it will be as strong as on the last day of testing and then it would be difficult to ride. We know that our bike is particularly affected by the wind, but it applies to everyone, with the exception of Honda ".

“If he reached this speed here, I don't know what will happen at Mugello, at the braking for the San Donato. In fact Johann went long because he didn't have the benchmark for braking. But I don't think it's dangerous, we ride futuristic bikes with the best components ”.

Miller: "I think I still have something in the tank, I'm hungry"

Maybe Jack Miller expected something more from the first qualifying of the year, but in the heat, backstage he didn't show it…

“The expectations were just for you guys, fifth quickest time is relatively good for me, also because the Ducati is a rocket at the start and at the first corner I'll be at least second - explained Jack Miller, who added - I'm quite satisfied. I went under the track record. Not only did I manage to put all the sectors together in the second run, but the race is tomorrow. I certainly wanted more, don't take my words badly, but I'm not dissatisfied. I think I still have something in the tank, inside of me and it can be said that now I am even more hungry ”.

The Ducati is very fast, but the Yamaha is very nimble. The comparison will be an exciting one…

“I have no idea how the Yamahas will go, the reality is that they have always been fantastic in terms of pace and lap time. We will see how the race goes. I don't know how much they have improved compared to the past year. Something might also change because it looks like there will be wind tomorrow, and the sand on the asphalt will create more tire wear. We will probably have a race you have to manage, like at Phillip Island ”.

Two crashes are certainly not a good start to this world championship for the Australian, and Miller knows fully well…

"I don't really know what happened, maybe the temperature, I wasn't pushing hard and I had an medium tire behind with maybe 10 or 12 laps on it, I got on the gas and lost the front. Of course, this sort of thing is always in the back of your mind, afterwards, obviously you feel it a bit. Especially in the second qualifying run, when I had a couple of moments and kept the bike, you always have it in your mind a bit. But there is a lot of difference between the early afternoon, in the heat, and the evening. The set-up is also completely wrong for such different conditions ".

The race is tomorrow, and it looks like it will be a Ducati-Yamaha battle …

"The Yamahas are better than the Ducatis in the change of direction between turn 11 and turn 12, and that will be a crucial point in the race, also due to tire wear, but I think the situation is under control. In FP4 we worked on the set-up for the race, looking for more stability ".