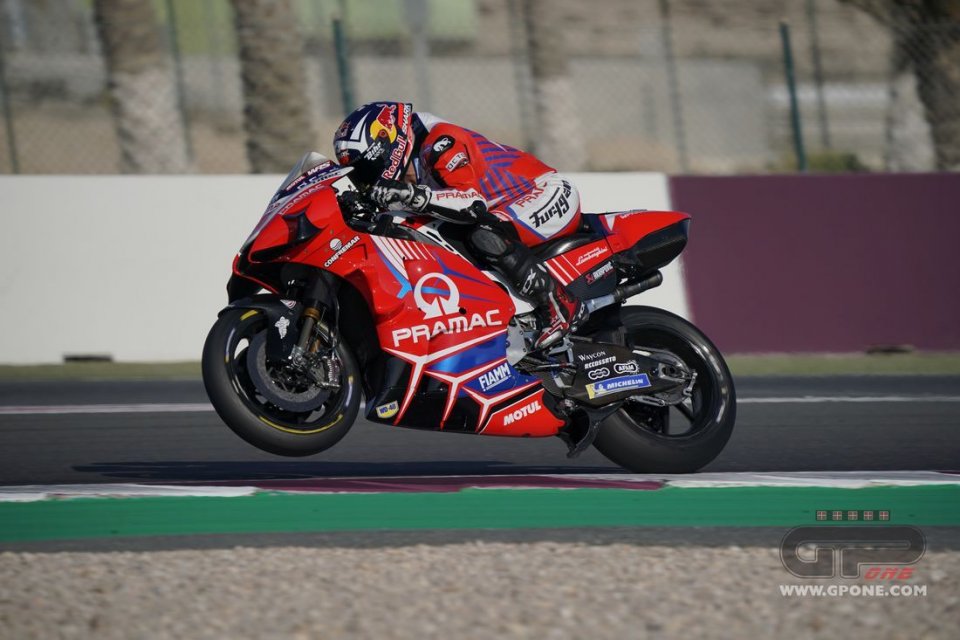 Races are not won on the straight, but you don't need an engineering degree to realize that there is nothing easier than gaining valuable time (and perhaps passing an opponent) on the straight. And so, even in MotoGP there is not one rider who is always clamouring to his technicians for a few more kilometres per hour. It’s not always easy to obtain them however, because horsepower is needed, but that is not sufficient. There's no MotoGP bike that doesn't have power to sell, but making a difference on the straight is another story. Aerodynamics, electronics and many other components play their part.

Don’t worry, you won’t find scientific formulas and technical disquisitions below, but only those 3 numbers next to the words top speed. While it is true that engine development was frozen in the winter, the engineers have still been working and the first true appraisal of their work came in the tests in Qatar.

It is well known that Ducati has always been a benchmark on the straight and the Rosse of Borgo Panigale once again did not disappoint. Indeed, they monopolized the top 5 positions in terms of top speed in Qatar. The best was Johann Zarco, credited with a speed of 351.7 km/h on the Losail straight. Not far away was his teammate Martin, 349.5 for him, then there was Miller (348.3), Bagnaia (347.2) and Bastianini (345). Marini was not part of the group, paying for his tall stature and in fact he was down at 340.6 km/h. 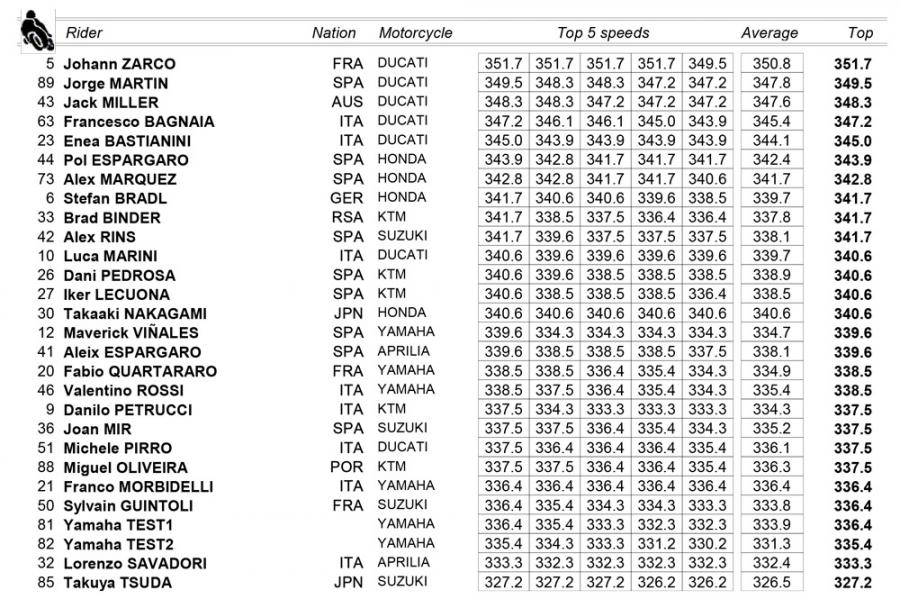 The Italian bikes are once again the benchmark and they seem to have seen off all the competition, which had managed to get closer in recent years. Above all Honda, which in fact put three of its bikes behind the Italians: Pol Espargarò with 343.9 km/h, Alex Marquez with 342.8 and Stefan Bradl with 341.7, further behind Nakagami (340.6 for him), who pointed out that the new fairing does not help in top speed.

The data shows that the V-engines have an advantage in this respect over the in-line fours, in fact the KTMs are behind Honda (Brad Binder is the best with 341.7 km/h) but not with Petrucci. Like Luca, Danilo also pays for his bulk and does not go beyond 337.5 kilometres then, already a big difference from the Ducatis. The exception that confirms the V4 rule is Aprilia, which still has to work on this aspect, in fact Aleix Espargarò 'only' recording 339.6 km/h as top speed.

And the 4 cylinders in line? They are at the bottom, apart from Rins. There is, however, an explanation, because on the last day of testing (to which this ranking refers) Alex tested the prototype of the Suzuki engine for 2022, which proved to be much more efficient than the current one. Its maximum performance (341.7 per hour, like Bradl and Binder) shows that even with this engine architecture interesting results can be achieved. Alex, compared to the day before (when he was using the engine with which he will race), improved his top speed by more than 3 kilometres per hour. Mir, who did not use the new engine, confirmed himself at that level, even a little below the Yamaha.

The M1 has never exactly been a rocket-ship on the straight and things have not changed. None of the riders managed to exceed 340 km/h and, as usual, bringing up the rear was Franco Morbidelli, who has the least advanced bike. It is interesting to note that the world champion Mir and runner-up Morbidelli were among the 'slowest' in a straight line, but it is also true that races are not won on the straight.