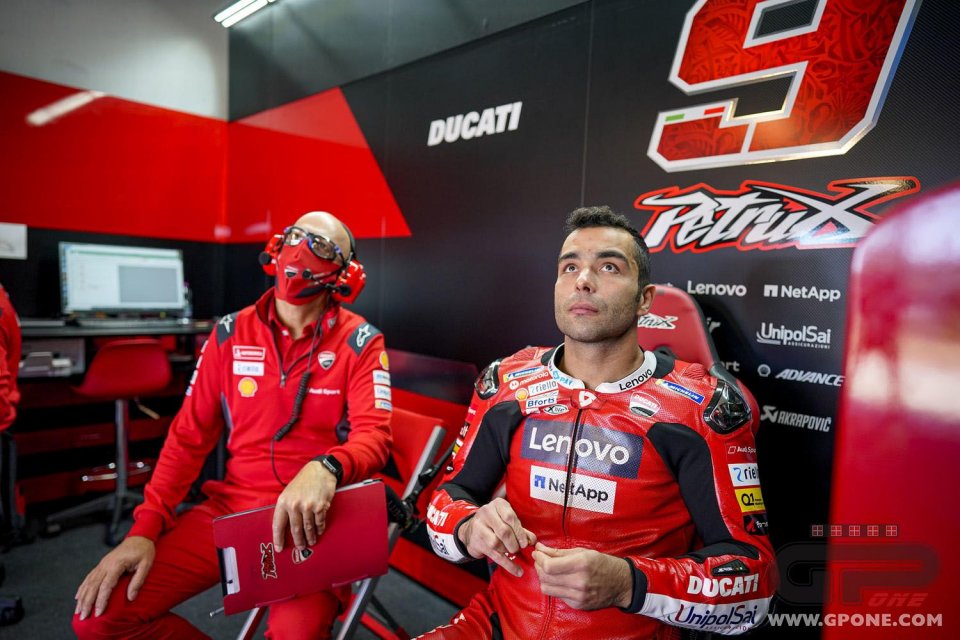 Danilo Petrucci came home with less than expected at Aragon, and he also had to deal with a problem that theoretically as a Ducati rider he should never have had to experience. The problem that Petrucci thinks penalized him more than anything else at Aragon was the lack of top speed, almost paradoxical considering that in theory this should be one of the strong points of the Italian bike.

In any case, Petrucci was not too disappointed with his race and is convinced that he can find better conditions in Valencia, hoping to finish his adventure as a Ducati rider with convincing performances.

"The bike was quite like yesterday's after qualifying - explained Petrucci - We wanted to try last week's bike, but we didn't make any huge changes. In the end we kept the one we had decided here, and it was good, I had only, as always, a lot of problems on the straight. It's not just a matter of difficulty in overcoming, but also of the impossibility of staying close to those in front of me.”

You also got stuck in the group before you found your rhythm.

"At the beginning I struggled a lot passing Bradl, I suffered from staying in his slipstream. I was suffering a lot in 4th, 5th, and 6th gear and this was the biggest problem. I am happy with how it went, because you must remember that I started in front of the Safety Car, which is not the best situation. We must take what comes, when I was alone my pace was not bad, I was losing two tenths on the other bikes only when going from 4th to 6th gear. Starting from behind and having difficulty overtaking is not the best. "

You also caught up and passed Dovizioso. What went through your mind at that moment?

"Certainly, when I caught up with Andrea, I was careful not to make a block pass, as I did for example with Bradl and Cal. But the fact is that I was faster in that phase in the corner entry, while in the other areas of the track I was losing a lot. It was difficult to pass Andrea, I just wanted to avoid making any mistakes, especially with him. "

How do you see the double Valencia round after what you experienced here?

"I bring good feelings to Valencia. Here we suffered a lot with the traction, but not exactly when you open the throttle, but rather in the phase of maximum lean. I think it depends on the fact that the asphalt here is very degraded, while in Valencia it is in good condition and I am always happy there. The set-up we will use will be like the one in Barcelona, ​​where I had great sensations. I am positive for Valencia; I think I can fight for something good there ".

You talked about your top speed problems, but you did not have any in the past…

"Yes, in the past I was often the fastest from that point of view. Probably the aerodynamics have changed a lot, even compared to last year, and I have been slow on the straight for several races. It probably also depends on the fact that I am bigger, but that also happened in the past. Maybe there were fewer appendages before and this helped me, I do not know. Of course, I suffer a lot because I cannot defend myself when racing in close duels. I must brake late, risking a lot. Even today I had to take risks to defend myself. I started from behind, but I found my rhythm and slowly I went back a little further. It's a shame because it took me a lot of laps to pass some riders and I lost several seconds there. "

How do you see the fight for the world championship? Do you think Mir is the favourite?

"It seems that Mir is always bringing home the best result even if he is not fast in qualifying, but that has never been his strong point. Fabio in these two races at Aragon was not as fast as expected. In my opinion Morbidelli could be a 'problem' for both, but as you can see the balance changes a lot from race to race and it is always difficult to make predictions. I bet on myself at Le Mans, it went well for me, so I am not betting anymore! I expect to do well at Valencia ".

You have always done a lot of motocross to train. In your opinion, is the fact that Marquez has not yet returned to the bike an indication that something is not going right in his recovery?

"Motocross is a risky sport, it stresses your body more than any other discipline. Motocross riders hardly finish a season without injuries, even simply due to physical stress. I did cross from I was 9 until I was 16 and I still carry with me the injuries of those years, problems in the back, in the vertebrae. In my opinion Marc is still not in shape, I talked to him in Barcelona and he wanted to return for the two races in Aragon. We didn't have the opportunity to go into much depth, I just wished him a speedy recovery and he told me he wanted to come back this year, but then I didn't hear anything else. "

Do you think it is difficult for Dovizioso to get back into the game?

"Everything can always change, also because at Valencia there is always a strong risk of rain. You saw at Le Mans what happened with a few drops of water, anything can happen. Then it will be cold there, there will be a new asphalt and Jack was on the podium last year, even if this means little because also at Aragon in 2019 there were two Ducatis on the podium while this year we were far away. In my opinion the values ​​change a lot compared to other years. Mir is always there in the race, maybe Fabio was absent here, but he did not have good feelings. I think the world championship will be decided in Portimao, this year it's really difficult to make predictions ".

VIDEO - Petrucci's tears: "I wanted to leave a mark and I did it"