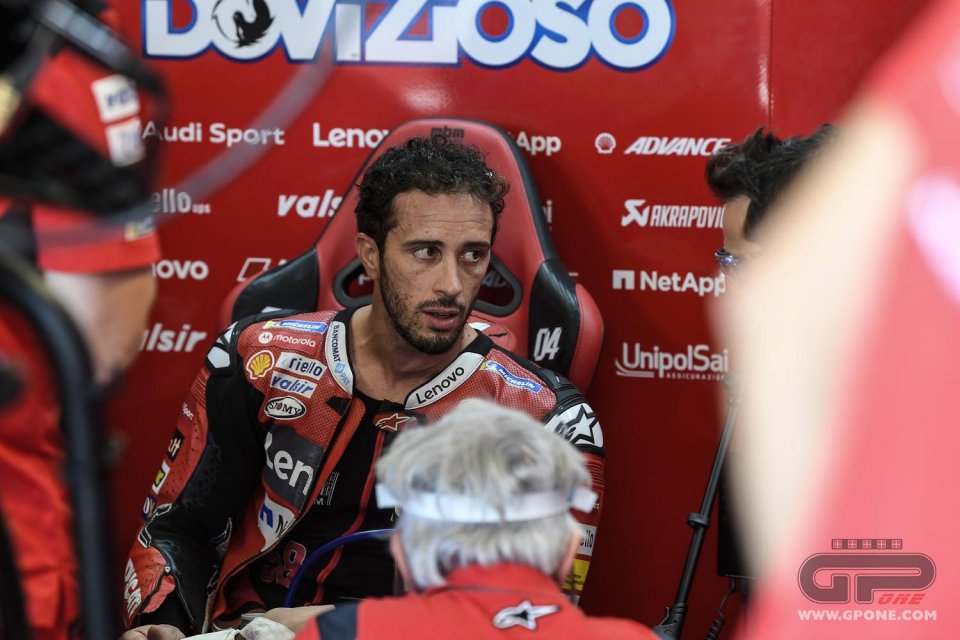 Andrea Dovizioso showed up at Misano with a detail on his suit that was definitely modified as compared to how it was before. The space where  "Undaunted" had been once written was replaced by "Unemployed". Many thought it was just a way to joke about his current condition as the top rider in the championship who is, at the same time, unemployed for the future.  But Dovizioso explained that it was his friend's idea and, having lost a bet, he ended up in the inconvenient situation of having to wear it during the free practice sessions.

"I had to pay a bet I lost with my friends,"  an amused Dovizioso said, "which I unfortunately agreed to do before Misano One. They forced me because we had bet that if I had been first in the championship after Misano One, I would have had to put that on my suit.  I don't think I did my best last week to create this situation, but it did happen anyway. So I had to wear it. You always have to pay your lost bets. Fabio did everything by himself in the end. He gave me a hand! In any case, I think I did it in a playful way, laid back," he said laughing.

When you'll be unemployed, will you think about the championship or will you be racing a Grand Prix in attack?

"Tomorrow I'll be forced to attack. It's  not just a confrontation between Fabio and me in the championship. We're all close. You can't lose points from anyone. Last week it was a coincidence that I finished 7th and still ended up leading the world championship. You need to be fast. It's not good to think about the raninking  in a championship like this at this point of the season."

What makes it so difficult for you to be able to go fast in this 2020? Some think that there's too much grip for Ducati here and that this causes you problems.

"I dont think too much grip is against us. We study a lot of data, but it's very difficult to understand how to apply what works and what doesn't. It's really complicated to ride in an unnatural way, like what's needed to go fast with these tires. At least I managed to brake very hard in most of the sessions today, improving my braking in general. It'll be very important to choose the perfect tire for the race, because we've seen that it takes very little to change the scenario completely, especially here at Misano."

But you were really satisfied after the tests. Did something change?

"After the tests, we compared the data with those collected in the race, and it became clear that I was faster. I was really happy. But the others have improved a lot too, even if I don't think as much as we did. In my opinion, in this second race, we'll all be very close."

You often say it's hard to ride the way you should to go fast. Can you try to explain it in a simple way?

"The really hard thing to do to be fast this season is  to be able to do something completely different on the bike from what I did until last season to go fast. Changing and making it natural is not easy, and that's the point. It is not a question of being able to ride fast, but of doing it naturally. It's a real fight against instinct, and it's not easy after doing things a certain way for so many years.  Everything changes, from the way you make the bike enter corners to the way you approach braking, and the way you define the set-up.  The needs are really the opposite of everything we have built in the last three years."

Do you think going through the Q1 could have helped you in the Q2 or was the one less tire a problem?

"Being through the Q1 helped me more thanit  penalized me. In the endm you do the Q2 with one less tire, but you arrive more prepared, so it's better. When you pass, it's an advantage, but the difficult thing is passing."

Let's talk about the future for a moment. You have so many proposals, but which bike would you be curious to try? Marquez's Honda or Rossi's Yamaha?

"I can't answer that, but I can say that we're talking to many, and many possibilities and dynamics are opening up , which can go in various directions. My choice will depend on what options I have before me, how everything will be organized. In some places, it makes sense to just be a tester, while in others it makes sense if you do a season as a tester and one as a rider. I have nothing in my hands at the moment. Certain situations still have to be outlined. It takes time. When clear proposals will made in detail, we'll see."

Pierer: “Dovizioso is no longer the right man for KTM  at the age of 35”