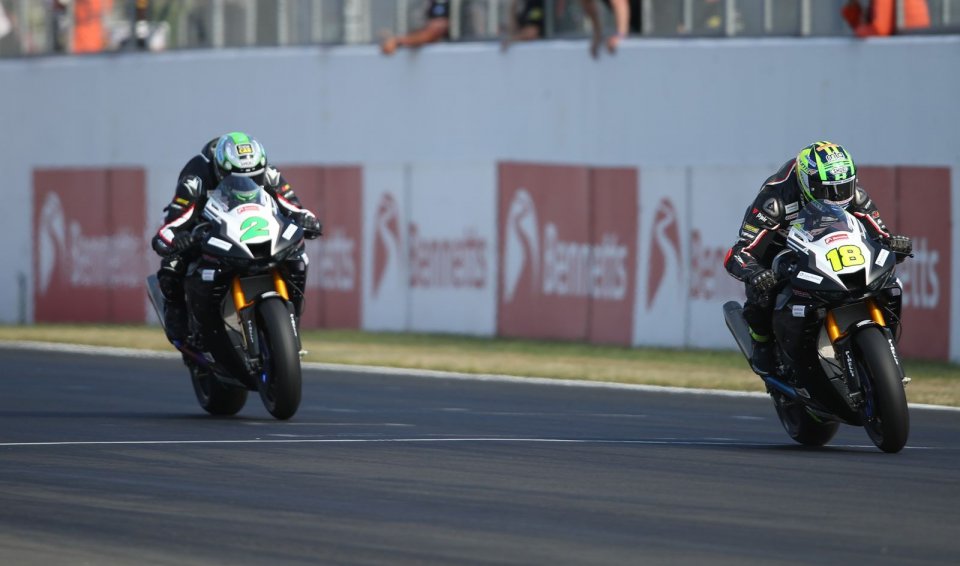 That the BSB British Superbike is the most hard-fought and spectacular domestic championship on the planet is certainly not for us to say. After the fantastic Race 1 on Saturday afternoon, on Sunday the remaining two races at Donington’s National circuit also produced excitement all the way. There couldn't have been a better start to the season, confirming the excellent state of health of the British championship. While in Race 2 the domination of the Irwin brothers with Honda Racing UK was repeated, with Andrew getting the better of Glenn, in Race 3 the Ducati Panigale V4 in the hands of Tommy Bridewell finally returned to the top slot.

After the incredible double win on Saturday, the "Irwin Brothers" confirmed themselves as the men to beat also in the second of the three races in the program. Starting from second and fifth position respectively, the two Honda Racing UK CBR Fireblades 1000RR-Rs set the pace for all 26 laps. Despite a late track debut, Havier Beltran's team proved to be very competitive right from the first free practice sessions.

Thanks to an excellent start, Glenn Irwin, again competitive after a horrendous 2019, immediately took the lead ahead of his brother Andrew. In a group fighting for victory, sometimes made up of as many as ten riders, there was no lack of sparks in pure British Superbike style.

Someone who did try, exaggerating, was undoubtedly Tommy Bridewell. The MotoRapido Oxford Racing Ducati rider attempted an overly optimistic late braking move at the Roberts chicane and ended up long in the escape routes. A big mistake that, in fact, relegated him to ninth position.

After 25 laps of red-hot action, the two Honda Racing UK machines fought for victory in the last lap, preceding Jason O'Halloran (McAMS Yamaha). Glenn Irwin, in the lead up to that point, tried to defend himself from Andrew's final lunges.

They both arrived side by side at the entrance to the Roberts chicane final, with O'Halloran third as spectator. Glenn was unable to stay on the ideal trajectory favouring Andrew.

A bad and decisive entry, but which allowed Andrew Irwin to take home the second consecutive success of 2020, the third of his career in the UK top class.

Glenn Irwin, for his part, after returning to the track, had to watch out for Jason O'Halloran. The Yamaha rider came out of the final corner with more speed, unable to defeat the 30-year-old from Carrickfergus by just 94 thousandths.

Fantastic fourth position for Kyle Ryde, who took the Suzuki Buildbase to the top positions following the technical problems of Race 1. The reigning British GP2 champion edged out Danny Buchan (Massingberd Mundy) with the first of the Kawasakis in the end. Sixth position for 2019 runner-up Josh Brookes with the V4 of VisionTrack PBM, author of an off-par performance after starting from pole position. 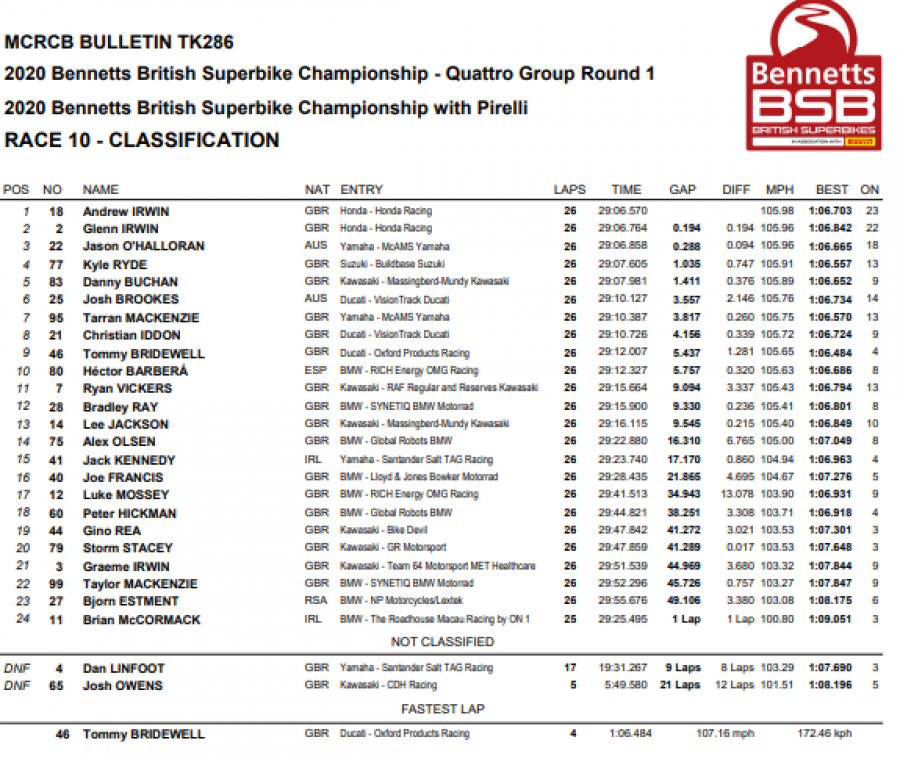 Ducati recovers in Race 3 with Bridewell, contact between A.Irwin and Brookes

After the domination of the brothers Irwin and Honda Racing UK, in Race 3 the Ducati Panigale V4 in the hands of Tommy Bridewell returned to success. The MotoRapido Oxford Racing rider achieved his fourth career success in the domestic BSB championship, a victory missing since Race 3 at Oulton Park last season. 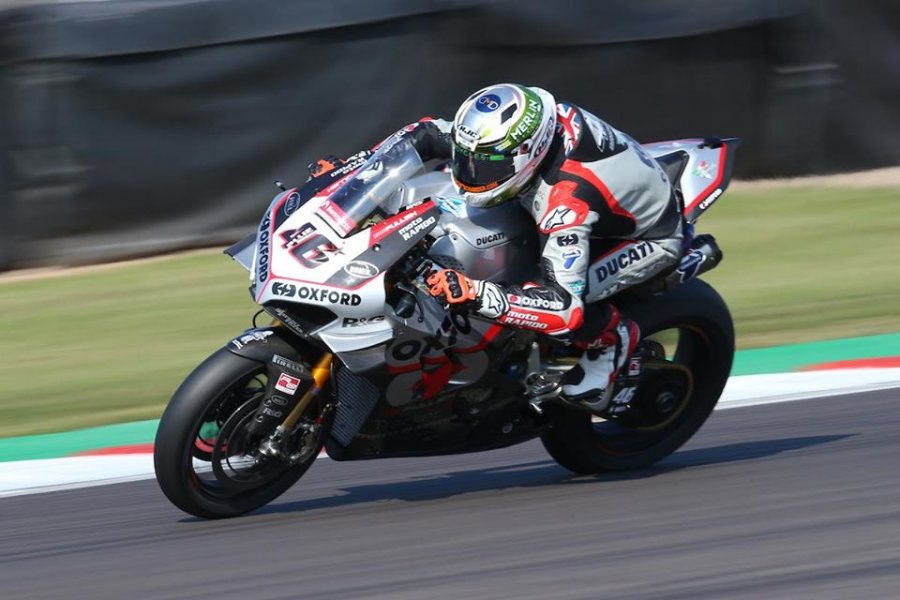 Thanks to the fastest lap obtained in the previous race, the 32-year-old from Devizies started from pole position in Race 3. With an almost perfect start he managed to monopolize the scene from the first corners. Bridewell then built up a three second gap, lapping consistently in the low 1.06s, taking him to chequered flag.

A well-deserved and desired success for Tommy Bridewell, anxious for redemption after the mistake made in the final laps of Race 2 while he was in the battle for the podium, which propelled him into the position of best Ducati rider in the championship standings.

A heated battle for the second position took place behind him which saw a sensational contact between Andrew Irwin and Josh Brookes. At the start of the third to last lap, coming out of Redgate, the Honda Racing UK rider made contact with the Ducati man, sending him crashing out and Brookes into the safety fence.

Despite this, Andrew Irwin again managed to get the better of his brother Glenn in the sprint for second place by only 93 thousandths.

At the bottom of the podium Jason O'Halloran, who preceded Christian Iddon and Danny Buchan with the first of the Kawasaki. Another seventh position for Tarran Mackenzie, then Kyle Ryde, Ryan Vickers and Lee Jackson closing the top ten.

At the end of the first round of this crazy season, the riders’ standings see Andrew Irwin lead with 70 points, 14 points ahead of Glenn and 27 over Bridewell. For Josh Brookes, a heavy zero.

The protagonists of the BSB British Superbike will be back on track on August 21-23 at Snetterton for the second round of 2020. 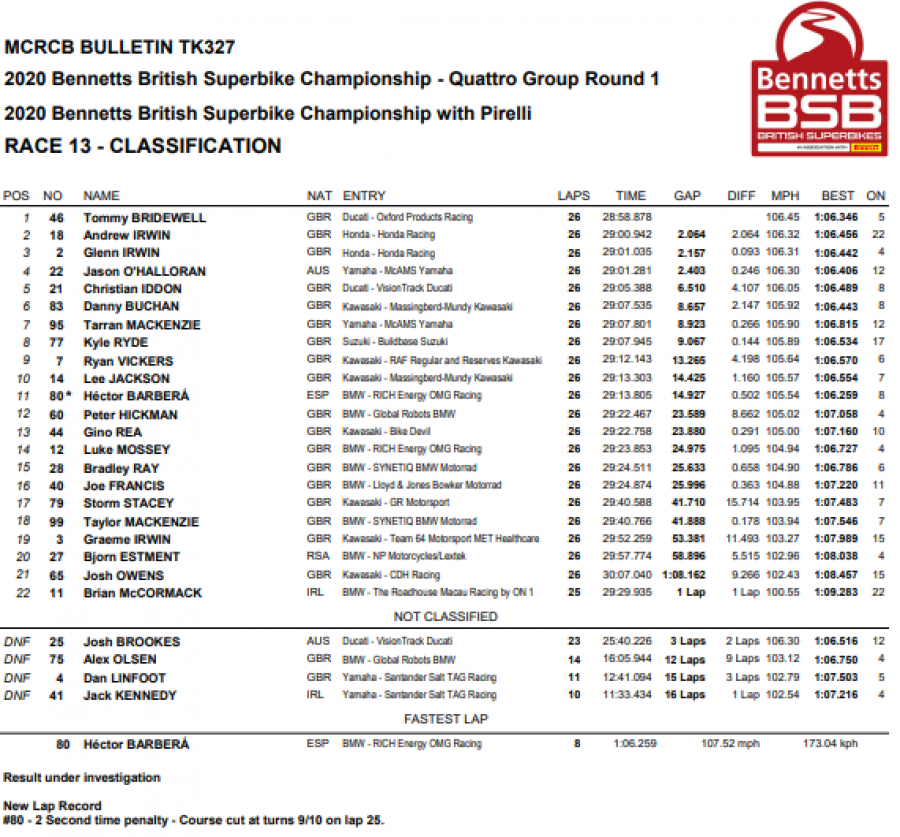