Not all stories have a happy ending, and one that doesn’t is that of Ben Spies. The Texan had started his predestined career: he had dominated the American SBK championship (3 consecutive titles from 2006 to 2008), arrived in the SBK World Championship and won it on his debut, then switched to MotoGP. He seemed to be able to do the same in the world championship, but in 2013 he had to retire due to injuries.

In an interview with MotoAmerica (found above), the Texan spoke at length about his back story, starting from that world title won in SBK in 2009.

“Honestly, I would have been upset if we didn’t win the World SBK Championship. Never felt 100% comfortable on MotoGP bikes”

“Obviously going into 09 we had tons of variables thrown in for us, with a new crew, a new bike, new suspension, new tyres and you got to learn 80% of the tracks. We knew it was going to be one of the toughest things we had ever done, but coming from three AMA titles in a row, I felt on the top of my game so going over there, honestly I would have been upset if we didn’t win. We knew we were outgunned in many ways, but our full intention was to go and win the first race at Phillip Island, which didn’t happen. We knew it wasn’t going to be easy, but winning the title was great.”

The next step was the MotoGP World Championship…

“Going to GP I would never say that the level of competition surprised me, but there were only two people on a motorcycle who did. I’ve watched Marquez a little bit, but Casey just did some stuff that blew my mind at certain times. Everybody else was really fast, top level no doubt about it but the biggest thing with GP is that I just don’t feel like I ever got the most out of myself and I never felt 100% comfortable on those bikes.”

Spies then went into further detail.

“People just don’t understand the difference between those bikes, its huge. I kind of grew up on the last bit of not having traction control and electronics and the bike sliding and moving around, then you go to World Superbikes with the Pirellis, you’re learning the electronics; then you jump in to MotoGP and you’re back 200 ccs with corner speed, the bikes don’t move much on entry or  slide, there are huge differences. Honestly, there were only 2 or 3 GPs when I felt I was able to get what I could get out of SBK and ride at that limit.”

“The reason I retired… My right shoulder is almost non-existent!”

The biggest problem, however, for Spies were his injuries. Ben gave a clear explanation for the reason behind his farewell to racing…

“My right shoulder is almost non-existent! I’ve had 7 surgeries into that shoulder, it’s basically the soft tissue inside the joint …there’s not much left. There was one surgery I could have done to try and fix it but if it went wrong, it would have been extremely painful, and I would have had to have another surgery. At that point I was going to be racing for another three years so the doctors said it would be unsafe for me to be out there.”

There was one episode, which he had never revealed before, that made him understand how serious his physical condition was…

“I was at Mugello in 2013 in the chicane that goes back to the final corner, it’s a left-right. I came out of that right-hander and I had a nice slide going, nothing major, but when I got to the paint that had more grip the thing hooked up and it twisted itself into some knots. When the front tyre sat down, it pulled my shoulder out and I could not let off the throttle, I missed my braking zone at probably 50 metres, and it was enough where I could slow down and hit the wall. If that had happened in the first three laps of the race, I would have collected two or three people at 160 mph so that was when I knew I was in trouble. I came back at Indy where obviously that happened, and it was a mess. Most of my career I didn’t have many crashes, just 2 or 3 a year in AMA. It was unfortunate that it was just my shoulder. I’ve raced with broken hands in AMA, and you can man up for certain injuries, but when you are fighting a big joint like the shoulder that’s not possible. It sucks, I wish I could have retired in a better way but that’s the way it is.”

He recently raced on the track with his friend Casey Stoner and he still follows the races, also helping Garrett Gerloff who made his debut in the SBK World Championship this year. The time of the Americans, however, seems long gone…

“If you look at all the last American racers at that level, like Hopkins, Hayden, Edwards, me, everyone was on 125s and 250s. At that age, you’ve got to be on race bikes to get up to that level. You don’t know the limits so you’re not progressing to that stage. In MotoAmerica they should have a Moto3 or a Moto2 type bike, you don’t have to follow the absolute rules, but those chassis for sure.”

In Moto2, however, there is a lot of talk about Joe Roberts, who in fact went to Europe at a young age to go through the ropes in the lower classes before joining Moto2.

“It’s hard to say, Joe has been over there for a couple of years and I haven’t followed him much although I did start later last year. Hopkins is working with him now and I’ve messaged John a bit and also Joe to give him support. John is good in that corner because having someone you can confide in is always good. Why it’s clicked? I think a bit of John and a bit of the bike change, but he’s looking strong.”

“A future as team manager wouldn’t be something I’d say no to. It would have been really good to race against Bayliss.”

Now Spies enjoys his family, but he does not rule out, sooner or later, a return to racing on the other side of the fence. As a team manager…

“Definitely Troy Bayliss! The way that I rode, and I could see how he rode. He returned right before I got there. I know he was watching what I was doing all through the year and that he wanted to be in those leathers at Phillip Island when he handed me the Superpole trophy. It would have been really good.” 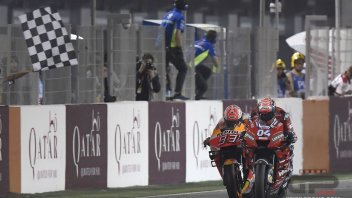 Until May 29th, you'll be able to buy some of the best shots taken during the World Championship. All proceeds from sales will then be donated to the...
1 day 19 hours ago

The two first events of the season have now been authorised. The first race week will take place at the Circuito do Estoril, followed by the...
2 days 5 min ago

The Californian Yamaha rider took the flag alone ahead of teammate Gagne and Herrin, who beat the Ducati rider in a photo finish. Elias crashed out...
6 days 1 hour ago

Defending champion wins ahead of Scholtz and Gagne. 5th and 7th, Wyman's and Jacobsen's two best Ducatis. Elias stopped by a problem.
6 days 17 hours ago

The reigning champion started has started 2020 in the best possible way, heading his teammate Jake Gagne. Race 1 at 22:00 on Eurosport
1 week 14 hours ago

In a video on You Tube, the driver defended his reasons but confirms the end of his experience with Audi in the Formula E
1 week 4 days ago