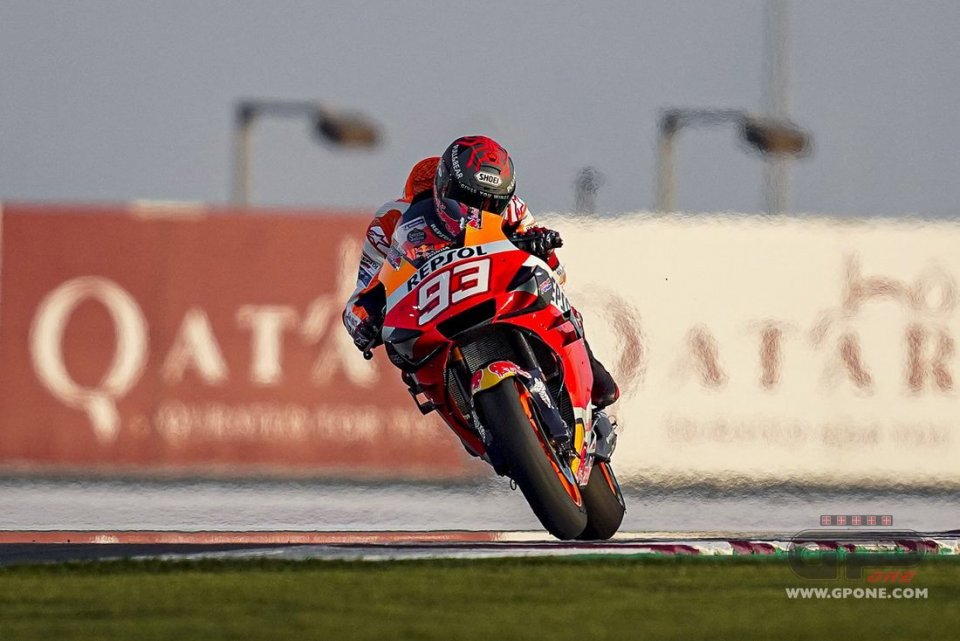 Even if he wasn't in great shape, it's strange to see Marc Marquez close a test day in 14th position. Honda has never been particularly at ease on the Losail track but, with the RC213V 2020, the situation seems to have worsened. With the 2019 bike, Nakagami closed in 10th place, but Alex Marquez is 19th and Crutchlow second to last.

As if that weren't enough, both Cal and Marc fell, and the Spanish rider practically destroyed his bike.

“I fell at Turn 8 when I changed direction. I have to do that move in a different way than usual, especially when I'm tired, pushing with my legs, because I can't do it with my shoulders. I was too aggressive and lost the front but, luckily, I'm okay," he explained.

From the outside, those falls look like a wake-up call.

"It's a difficult bike to ride, as the Honda has always been ," Marc admitted. "At the moment, I'm not in perfect shape, and I can't exaggerate, but it's still critical. When you try to push a little more, you fall."

So, more than his physical conditions, the new bike is at the center of the world champion's thoughts.

“My shoulder is not the thing that worries me the most," he said. "Logically, I'd like to be fast on all the tracks, while here in Losail we don't even have the potential to be in the top 5, so I'm a bit worried. Today, I back-tracked a bit to find a foundation, and it looks like we're getting closer. In 2016, I remember when I ended up in a similar situation. You have to stay calm because there are 20 races ahead, and this is a very special circuit. You don't need to win in Qatar, but you have to work well."

Too bad that there haven't been results yet.

“I tried to work, to find the way, but I suffer a lot on this track," he continued. "We're trying to understand where the problem comes from, because all the riders on the new Honda have the same, and this conditions all the corners. It didn't go that bad in Malaysia, but we're struggling, so is Crutchlow who is usually very fast here.”

Before thinking about a solution, we must find the origin of the evil.

“We're not yet sure that the cause is the engine. We're analyzing everything from set-up to weight balance," Marquez explained. "Tomorrow will be an important day, in order to face the first Grand Prix. I think the situation will be different during the season, but we'll have to put everything right if we want to get a good result on this track."

Meanwhile, the opponents are not standing still and, in the paddock, everyone is talking about Ducati's device that changes set-up in acceleration.

“When another manufacturer tries something new, the others try to react. For example, the system that lowers the bike at start off. We're also trying it, even if it still doesn't work as we'd like it to," Marc confessed.

Alex Marquez: "It's more difficult than I expected."

The younger of the two brothers is also struggling, even more so, since he's a rookie. "Today was a bit better, despite the flu," on a positive note, but the road is still long, and there's only one more day of testing before jumping into the fray of the first GP.

“It depends a lot on the track. I felt good in Sepang, and here I'm struggling," Alex explained. "I still don't feel as comfortable as I hoped. I suffer in fast corners and, to make the bike turn, I have to tilt it a lot. We suffer even in braking. Tomorrow we'll work on set-up and electronics, in order to move forward."

The road had seemed more downhill to him in Malaysia.

“It's more difficult than I expected after the good Sepang tests, but there's a big difference. I know this track has always been complicated for Honda, so you have to manage the situation and prepare well for the GP," is his goal.