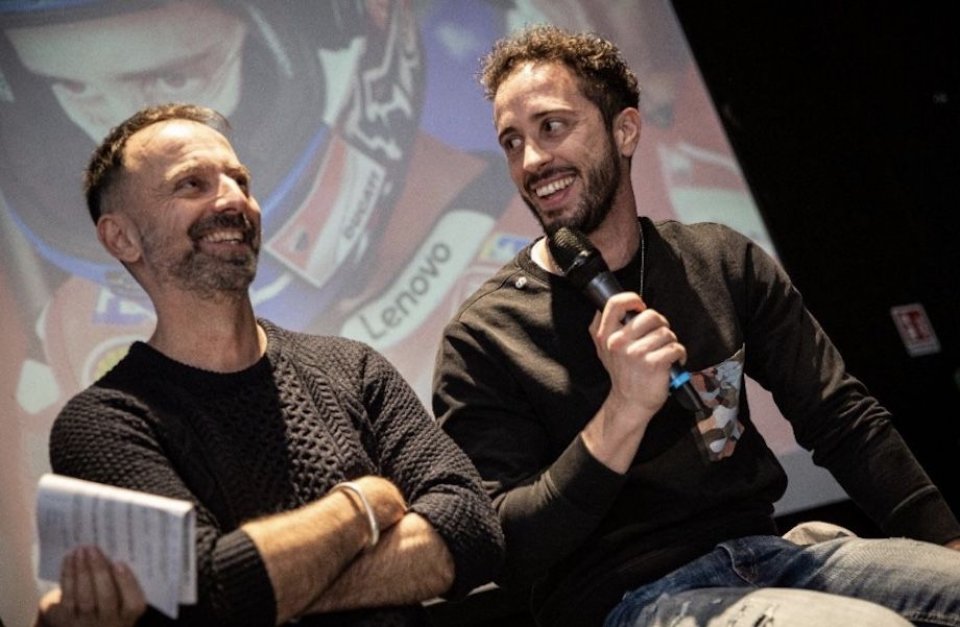 There are two basic passages, and both are in the middle of the "Undaunted" documentary that tells Andrea Dovizioso’s 2019 season from the inside. The first is almost philosophical: "Speed ​​doesn't make you feel free, it's a cage", while the second is much more practical and imminent: "I think I can beat Marquez and win the title. If not, I would no longer be in MotoGP."

This is the "Dovi" that emerges from the 52 minutes of the documentary produced by Red Bull, a double spirit, as he has often suggested to us with the graphics of his helmet or with the results on the track, one rational and almost cold, the other warm and instinctive. But what interests us most is knowing that Andrea believes in the world championship in what will surely be a decisive year for his career in MotoGP.

"Everything can be - Dovizioso said, in a chat with journalists on the sidelines to the preview screening of the documentary “Undaunted” which was shown last night in Milan - I feel competitive and despite my 34 years of age I am in my best form. I have not felt any limitations due to my age so far and as long as I can win the world championship I want to try and continue to take that risk but only if I have a winning project behind me. Otherwise it won't be a problem for me not to go on, I know what I want, and I work for it. I am relaxed, I know what I am working on, I know my strengths and weaknesses and I have my situation quite clear. At the moment I cannot say that I will continue with Ducati, anything can happen, Yamaha have already made their move, but I think it is still early to talk about 2021-2022".

You said it, Yamaha's moves anticipated all the talk about the rider market, how do you view what they did with Rossi, Vinales and Quartararo?

“Yamaha have worked a lot and they have shown that they can go fast, I think all four bikes will be fast. In my opinion not even Valentino knows how competitive he will be in 2020, he is looking for that little more speed that he did not have last year and if he regains his positive feelings on the M1 he can fight with the other Yamahas of Vinales and Quartararo who they are in great form, either because of their age or for the moment in their career. I believe he will do everything to keep racing."

The documentary will be released on the Red Bull channels from Friday and will retrace your 2019 in a very internal way. How would you describe the season we will see in the 52 minutes directed by Paolo Novelli?

“It was not a simple year. It’s the third one in a row that I finished in second place, but I would say that it was the most difficult, due to a variety of situations. The goal was to win the world championship, true, but many times we forget that the riders behind us were not second-rate and so I can say that it was a good result."

After such a year, how do you find the motivation to start again?

“Honestly, we all race to win and if you don't win you can't be really happy, but when you're inside you experience the situation differently from what you see outside. I do not see these three second places as three defeats that I could have avoided or in which I could have done more, they have been three years with ups and downs and with things that can certainly be improved but in these three years Marquez was stronger than we were and everyone else. I don't race to finish behind Marquez, that’s obvious, and even in 2020 I will race to win"

What is your approach to 2020? The tests in Malaysia left us with the unknown quantity of the tyres… Can they really make such a negative difference to you?

"It is early to say anything, we did the first tests but with new tyres it’s not easy to read the situation as the balance of the bike changes and the three days in Malaysia are not very indicative because you get back on the bike after 2 months on the track with the most extreme conditions of the championship and there you cannot always work as you want. We also did a long run with Danilo, and it always makes a difference to do it in two. There is certainly room for improvement in the tyres, we have to see how much. In my opinion, in the first races everyone will be trying to adapt to understand how they behave during the race. Everything remains to be discovered, Yamaha and Suzuki are fast and Marc is not doing very well because of his shoulder and he’s difficult to fathom, so at the moment it’s not important to see the values ​​on the track but to try to improve the balance of the bike".

Does the new set-up and the new characteristics of the tyre aggravate even more the problem of the Ducati when cornering?

"What is happening is not yet very clear, on paper it seems that the bikes that prefer corner speed are better, but you have to wait to try everything on the other tracks to get a better idea".

Going back to the documentary, we all know you as a very private person, how did this idea of ​​a very "internal" documentary with Paolo Novelli come about?

"We didn’t know each other very well; we had done other jobs together but there has always been mutual respect and then he is known by everyone in the paddock. I am passionate about motocross and I try to understand everything that happens behind a race and I often look for videos and I noticed that the world of motocross is much less of a ‘closed shop’ than that of MotoGP, so I wanted to show something more internal. I am always shy and reserved but with this documentary I showed some of the insides of MotoGP. At first, I was a little scared because I had never done anything like this. Paolo Novelli is very different from me, I am a bit of an engineer while he is an artist, it was an intense year in which we got to know each other and had some fun together".

“Seeing myself teaches a lot, I'm not an actor and what you will see in the docufilm is all real and without filters. Even after the interviews I sometimes realize that I can't bring out what I want to convey, so it's an important exercise for me, even a little complicated. I had already written about myself in a biography, but this is completely different, Paolo lived with us and this year I will miss him at the races."