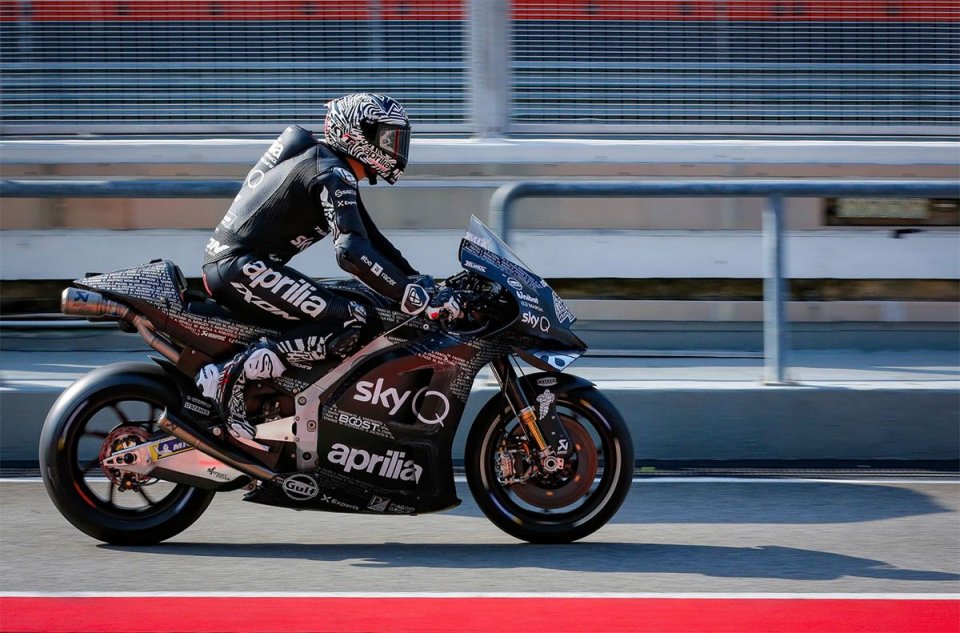 A revolution. This is how Aleix Espargarò defined the new Aprilia RS-GP, which represents the winds of change for the Noale manufacturer in MotoGP. A huge effort for one of the most titled racing departments in motorcycling that has a great desire to get to the top even in the current premier class. The Spaniard had already tested the excellent qualities of the new bike during the shakedown and for those who were in the pits it was emotional to see him get off the bike after the first laps of the track and thank one by one all the men in the Aprilia garage.

Because it didn’t take Aleix much time to realize that the RS-GP he got his hands on is really a big step forward and can finally give him the satisfaction he deserves in a fourth year on the Noale bike. But above all that he can pay back Aprilia for all the efforts made in these years. Today he ended the first day of testing together with all the official riders with an excellent seventh fastest time, less than half a second from Quartararo's benchmark. The music has finally changed in the Aprilia box.

"I feel much better on the bike, there has been a big step forward and a big improvement from the previous RS-GP. In the shakedown I was able to complete about 25 laps - commented Espargarò - not so many because we had some small problems. Today, however, I put together almost 50 laps and we were able to gather a lot of information. I feel good with the new bike, something is still missing but it was a great step for us. I want to thank all the Aprilia men here and in Noale, because I know that it is a real revolution and it wasn't easy for them. In the last two months they have worked very hard and I'm happy, obviously".

The new bike has only positive aspects then?

"We still need a bit more acceleration. I did a few laps together with a Honda and it's amazing how fast that bike goes every year in acceleration. My bike has improved a lot in many ways, such as agility and stability. When you release the brakes, it goes much better into the corners, the rider's position is much lower. The ability to turn has improved a lot but we still lack a little acceleration which is a very important aspect in this period of MotoGP. Our engine is very electric, it goes very well and helps the rider. We have to develop it to improve the aspects where we are still behind. Ducati, Honda and also KTM have great acceleration and it is difficult to fight with them because it is practically impossible to pass someone if you don't have at least similar acceleration. This is the aspect we still need to improve on."

The sound of the Aprilia during the shakedown

The bike is going fast already, but how much room to improve do you think it has?

"There is a lot of room to improve, there are many aspects we can work on and improve. Many engineers joined Aprilia in the last part of the season and started working on the 2020 bike. In my opinion Aprilia Racing has made a big change because the information and experience of these engineers is starting to show now."

For you Aprilia are now a family, you have been there for many years…

"I have been in Aprilia for a long time and it has become a sort of personal adventure. It is a satisfaction to be ahead with Aprilia, I am in a very good period and I am convinced that with a competitive bike I could fight for the podium. I would like this motorcycle to be an Aprilia and this is a good start "

There’s no Iannone in the box, he would have been useful at this moment. Have you spoken to each other?

"I talked to Andrea, also at Christmas when the whole story came out. We have a good relationship and I am very sorry because I see him very depressed and I am very sorry about that. On a personal level it is an important loss at the moment, because when you have a strong teammate who can open the throttle, you tend to give it even more and if you want to fight for the top five, having a very strong teammate helps. I really hope that we’ll have some good news in the next ten days."

Have you set yourself any goals for 2020? Is a fight for the podium possible?

"It will be very difficult to fight at the top. In recent years we have seen how difficult it has become to stay there, I have always had excellent teammates and they have not succeeded either. The new bike opens a completely new chapter however, I feel very much better on the new RS-GP. We are just at the beginning, but everything is really promising. Aprilia has taken a big step forward and I think it will be a good year."