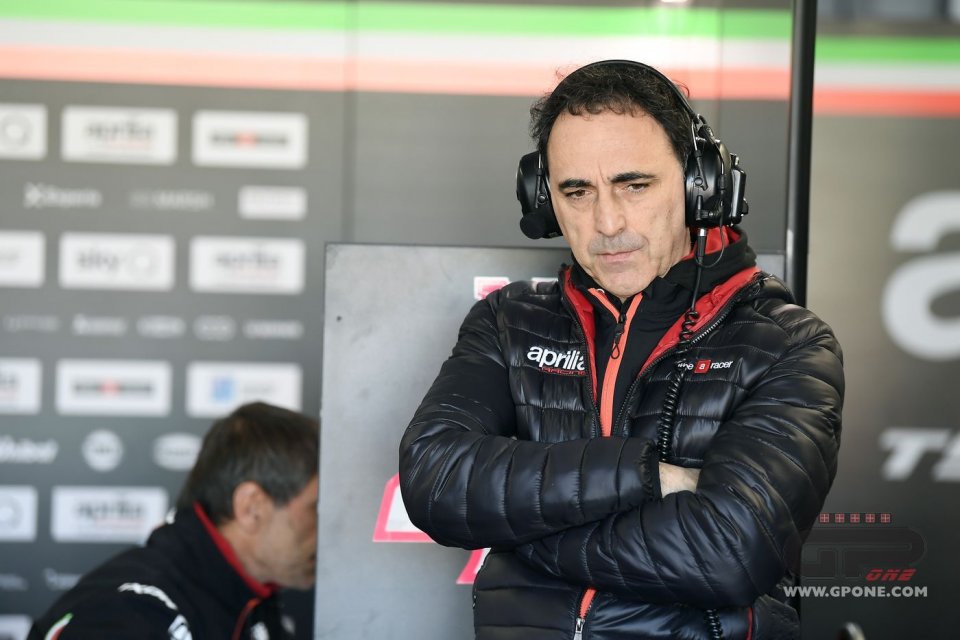 Just when Romano Albesiano had finally decided to revolutionize his RS-GP by switching to a configuration with a 90° V engine, following the example of Ducati first and then Honda, Aprilia found itself having to deal with the Iannone anti-doping affair.

Apparently, however, in Noale they didn’t panic, even if a very difficult moment is on the horizon: in fact, there is the new project to implement and the input of Andrea, who has raced both the Desmosedici and the Suzuki, is more than important: it is vital.

For this reason, the Veneto manufacturer is working on a plan B, which they would like not to have to use, but it also involves the use of their former flag-bearer, Max Biaggi, even if the Roman Emperor has rejected this possibility. It seems a bit like calling the reserves back into service, but as an alternative there is also a promising but still unfulfilled young talent who goes by the name of Savadori.

All this while also thinking about a return in Superbike, in an exploratory capacity.

It seems that Aprilia has finally decided to turn over a new leaf.

"The 2020 Aprilia RS-GP is a totally new bike. Let's say that before the middle of 2019 we decided to turn the page, so an engine that uses an open V layout was chosen. The justification for this is its simplification. In this way, in fact, we can use different firing configurations, and also a different layout for the exhausts. The end result is a motorcycle that has greater potential".

The biggest advantage therefore is ...

"The fact that it is configurable in different ways. The firing order is very important for power delivery. Then we revised the positioning of the thermal parts to use an external flywheel. This will allow us to play around with this component, instead of changing the crankshaft. The engine was born without, and even if you wanted to apply it, it would have been very exposed in the event of a crash. We completely redesigned the thermal parts of the engine and the transmission, in order to put it in a more protected position".

Assuming a 90° V engine, was the choice made with Ducati and Honda's performance in mind or because of internal considerations?

"With an open V engine, we could use an external flywheel: it's a big advantage"

"Honestly both. We have seen others invest a lot on this front, and with the previous configuration we were tied to the choice of a single crankshaft. Now with an external flywheel we will have the opportunity to adapt the engine to the tracks, or to the rider, who will as a result be able to change his mind. It is a much more adaptable system. As a matter of fact, apart from the fact that Aprilia has concessions, the flywheel is not a checked part of the engine".

It must have been a tough job to redesign the entire bike in a few months.

"It was actually not as dramatic as you might think. Even the most open V does not require a total revolution compared to the previous bike, but we have redesigned everything anyway. The reason for this thorough redesign was not the change in the opening of the V but the idea to make something better".

How many 2020 RS-GP bikes will you be able to bring to Sepang?

Have you already done a test on the track?

"The RS-GP has never been on the track yet, but the engine on the test bench is giving us satisfaction"

"No. The engine is still on the bench and the first results are very good, we are ahead of where I would have expected to be. However, the bike has not yet left the factory and will go out on the track for the first time at Sepang".

Aprilia has been racing in MotoGP since 2015 and its best results are two sixth places, with Aleix Espargarò and Andrea Iannone, last year, in Le Mans and Phillip Island. Then there were two other sixth places for Aleix in 2017 in Qatar and Aragon. And if we rummage around, there is also a seventh place for Bautista in Japan. But that's all.

"Clearly we expected better results over the years. The results are not totally satisfactory, it would be hypocritical to say otherwise. If, however, I consider the technical level where we started from and where we are now, there is no comparison. We have grown exponentially, but so has MotoGP and this has limited us. I believe that we are not far away. We know our weak points and we know that if we can fix them it is feasible that we can be up at the front ... We saw it in Aragon and Phillip Island, and we saw it clearly. A change is possible and realistic.”

You said you know the weaknesses of the 2019 RS-GP.

"Our weakness is very clear: we have accumulated most of the gap in the braking and corner entry phases. At the centre of the curve and during acceleration we were okay. In particular with Andrea we had a problem with top speed. The strengths, however, are the bike’s ability to turn in fast corners, as we showed in Australia or at Aragon. Making an objective analysis from the engine point of view we had a gap with respect to Honda and Ducati, while we consider ourselves at the level of Yamaha and Suzuki. Braking and corner entry were the problem. We hope to resolve the balance difficulties this year ".

What has been missing in recent years: organization, economic investment or riders?

"At an organization level we have already made a good step forward. In Aprilia there are new people, some have returned, and this has given us confidence. For the first time in the racing department the seats are all occupied, and this is a clear a sign that the company is pushing hard to close the gap with the opponents. Obviously, you never have enough people ... and the investment goes hand in hand with that. As for the riders, on the other hand, I am convinced that at the moment we have two excellent ones. Aleix and Andrea are very good, and more than capable of reaching the target we are aiming for".

Last year, however, Aleix had even expressed his intention to stop.

"Aleix has an extraordinarily strong character and an exaggerated motivation. Judging by our latest talks with him, he seems very motivated to continue".

The amount of work in the early part of the year has left you with just a bit of time to also take a look at Superbike. The fans would like you to come back.

"There is actually the possibility of making some Superbike appearances, relying on the M2 team who will make three wildcards. Probably with Ponsson. We will do it to keep an eye on the championship."

And Biaggi? His enthusiastic comments about the test he did at Sepang suggest that he might fit into your plans again.

"Max back on track with us? It would be very nice"

"He is so great that we would like to see him everywhere in Aprilia. It would also be great to see him on a MotoGP bike. After the accident with the motard he didn't want to ride anymore, but a few days ago I felt that he was really excited. Let's see what happens, it would be great.”

Without beating about the bush, how worried are you about the Iannone doping case?

"Iannone's doping distresses us: it is highly likely that he will not be in Sepang"

"It is clear that it is a subject that distresses us a lot. At this point it is highly likely that Andrea won’t have solved his problems for the Sepang tests, so we will use Aleix and Bradley Smith. From there on we will have to see how the situation evolves. To be honest, I am focusing on the technical aspects. Nobody knows how the rest will evolve: it’s something new for motorcycling."

Why would it be essential to have Andrea in the Sepang tests?

"Andrea's experience with Ducati and Suzuki has helped us a lot"

"Andrea is important because he has recent experience on extremely competitive bikes. This has allowed him to give us important feedback. Then we went looking for him for a long time and we believe a lot in him, from a performance point of view. With Espargarò he makes up a pair of very strong riders. Then if it is impossible to solve the problem, we will find the best plan B that can be implemented.”

"Bradley Smith won’t be able to do all the tests on his own: ​​we may decide to support him with Biaggi and Savadori"

You said that Smith will replace Iannone in the tests but seeing as they begin on February 2 for the test-riders, given the temperature and humidity, it would be an inhuman effort for Bradley to test for all six days.

"In fact, it is possible that we will put someone in alongside Bradley. Abraham contacted us after the news about Iannone, and obviously he would be eager to return to MotoGP. We have talked about it, but nothing has been decided. There is also a possibility that we will use both Biaggi and Savadori. Yes, both are in plan B.”

Max Biaggi thinking of “going at it alone”: openings in Avintia

The official announcement came today. The rider from Ascoli: "I have no expectations other than to return to a serene and clear climate inside the...
19 hours 16 min ago

This is the first MotoGP pole for Honda since Pol Espargaro at the British GP last year (21 races), ending the longest sequence of successive premier...
1 day 10 min ago