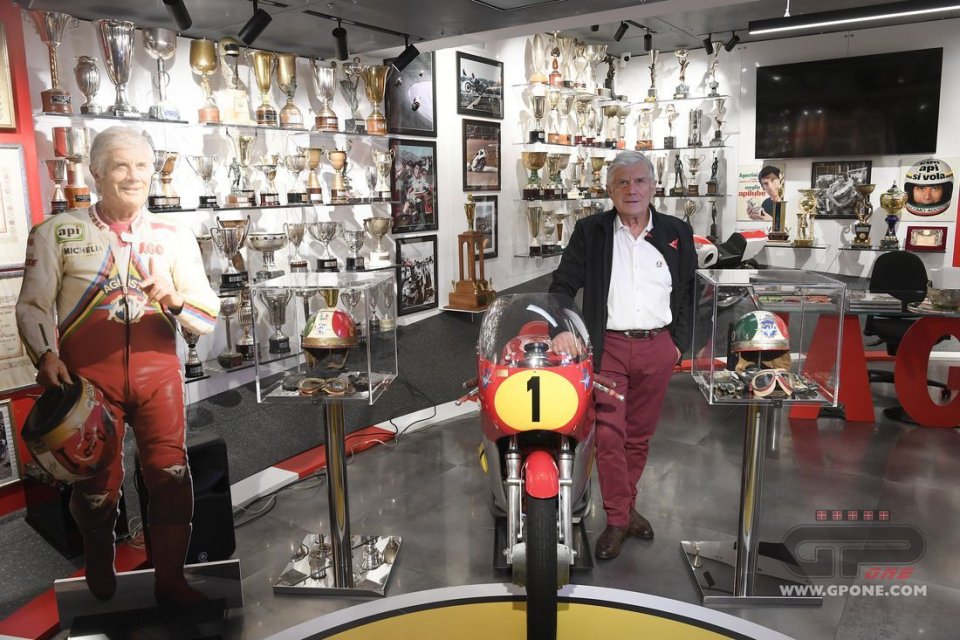 Giacomo Agostini is not only the most successful motorcyclist in history (if you have to be reminded, 15 titles), but he was also the first "modern" rider, the forerunner to various Rossis and Marquezs. Somehow, Ago was a sort of divide, taking the Continental Circus to another, more professional level.

That's why the Trophy Hall, which was inaugurated today, is not just a simple collection of trophies and memorabilia, but a real history lesson that every fan should see. The past helps us understand the present, and Agostini's career is proof of this.

His colorful suits full of sponsors are the "mothers" of those of modern riders, and it is no coincidence that the champion hooked up with a brilliant pioneer like Lino Dainese. The bowl-shaped helmets used back then gave way to full-faced ones. Motorcycling grew up, losing perhaps a bit of romanticism but to the benefit of safety, which was something Giacomo supported, fighting on the front line against races that sometimes resembled a Russian roulette.

And then we have the bikes, of course: the legendary MV 3 and 4 cylinders with which Mino wrote history, and the Yamaha that did a number on the Americans in Daytona at its debut. But it's the details make a difference.

A lesson also for the young, who can learn how Ago did not rely only on a boundless talent, but coupled it with meticulous, scientific work.

Finally there's Agostini the star, the one in ads, films, and photo story books. The portrait of a star before social networks.

Ago is this and much more, but we mustn't spoil the surprises. So, just walk through the door of his museum room and enter his world.