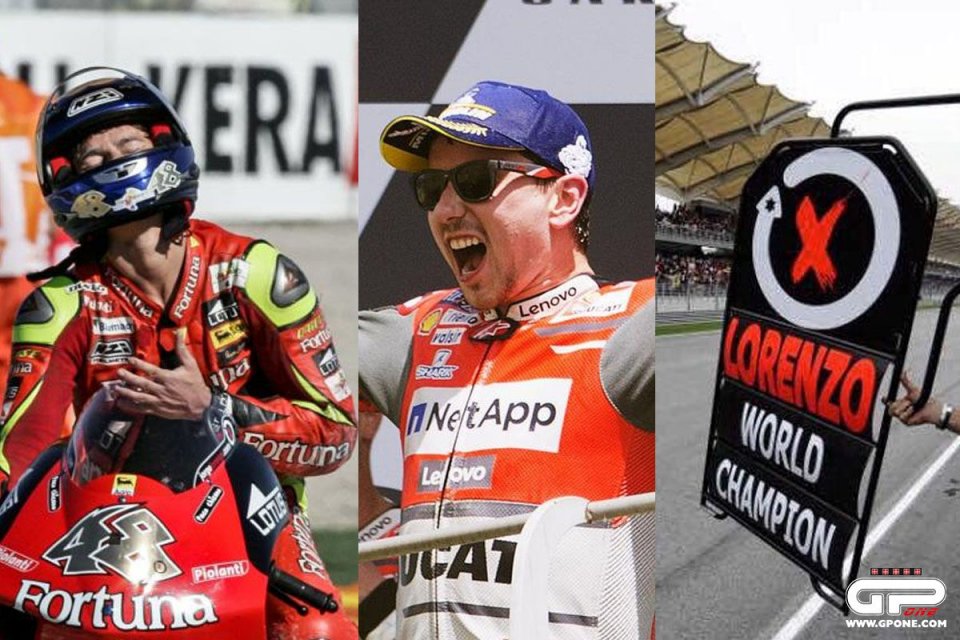 Jorge Lorenzo has called time, announcing his retirement from racing once the Valencia Grand Prix concludes. A devastating 2019 from a sporting point of view, complicated by injury, which has led the great Spanish champion to make this decision, putting an end to a career that has been both long and extremely successful. Lorenzo is one of the most successful riders in history and here are some of the highlights of his career.

Jorge Lorenzo appeared in the world championship paddock for the first time at Jerez. This was the third race of the 2002 season, but a small administrative issue prevented Jorge from competing right from Friday. Lorenzo was born on 4 May, and so on 3 May 2002 he hadn't yet turned 15, the minimum age required to compete in the championship.

Lorenzo celebrated his birthday on the Saturday, and immediately made his track debut riding a Derbi. And so began his wonderful story in the world championship.

After three seasons in 125, where Jorge was often a frontrunner but not quite in the running for the world title, in 2005 the Spaniard moved to the 250 class, finishing his rookie season in fifth place overall. His clean riding style was highlighted on the 250, but his immense talent only came to the fore once he climbed aboard the Aprilia.

Jorge won the first two races of the season and went on to win six more. Gigi Dall’Igna, still working in Noale at the time, fell in love with Jorge, who was crowned champion come the end of the year, taking up the baton from Dani Pedrosa, who had just moved to MotoGP after having secured the 250 title in the previous two years.

Lorenzo increasingly stood out as a personality, and he began to collect a variety of nicknames, starting with “Porfuera”, due to his great ability to attack his rivals by going around the outside, with moves that were often at the limit of physics.

In sport, they say it's much harder to win again, than to win the first time. In his third 250 season, Jorge managed to win his second title, dominating throughout the season to score nine wins. His thoughts began to turn to MotoGP, where many manufacturers were interested in his talent, but the perfect opportunity eventually came with Yamaha, that was seeking a successor to Colin Edwards as Valentino Rossi's team-mate. Hence, they took a bet on the young Spaniard.

Jorge made his MotoGP debut in 2008 but, having impressed with pole positions and wins in the early part of the season, he then suffered a series of crashes, some of which were dangerous. His approach to the reigning class was proving overly aggressive and the violent MotoGP bike saw him pay the price. Towards mid-season, Lorenzo even went as far as saying that he was scared to die on the track and was considering retirement. He found the strength to continue though and, in 2009, became Valentino Rossi's main rival for the title.

Fully matured as a rider, he won the title in 2010, also taking advantage of Rossi's physical problems. Mid-season the Italian decided he would move to Ducati. Lorenzo was essentially becoming the first rider in Yamaha and the two riders struggled to get on under the same roof, their strong personalities clashing. Lorenzo was at the top of his game, few riders able to beat him on track.

2012 - STONER WAVES THE WHITE FLAG, LORENZO DOES IT AGAIN

As soon as Casey Stoner climbed aboard the Honda at the end of 2010, it was clear that he would be Lorenzo's main rival for the 2011 title. The Australian was beating everyone and was the favourite for the following season too, but when injury forced him to miss several races, he paved the way for Pedrosa and Jorge Lorenzo.

The Spaniard had taken over from Rossi in terms of responsibility for developing the M1 and it appeared he was good at it, because he scored seven race wins and an impressive series of podiums that saw him secure the MotoGP title for the second time. His fourth title in a career that was beginning to look truly impressive.

2013 - ASSEN AND THE BATTLE AGAINST EVERYTHING AND EVERYONE

2013 saw the arrival of a certain Marc Marquez in MotoGP, but Jorge Lorenzo had no intention of laying down his weapons or giving up on the title fight. He found himself back together with team-mate Valentino Rossi, and dominated the first race of the season, immediately proving that he wanted a fifth title at all costs.

Lorenzo went to Assen as championship leader, having already clocked up three wins and two podiums. A very scary crash during free practice should have ruled him out, his collarbone broken. But Jorge didn't give in and attempted an incredible feat. He flew to Barcelona where Doctor Mir carried out surgery to reduce the fracture and then he returned to Assen, where he lined up for the race and scored an incredible fifth-place finish.

A historic achievement, that only highlighted the Spaniard's determination to retain his position as the man to beat in MotoGP.

2015 - THE LEAST CELEBRATED TITLE IN HISTORY

Everyone knows the story of the 2015 championship. A vicious season-long fight between Lorenzo and Rossi, the Spaniard ultimately securing the title at Valencia. But there were none of the usual celebrations in the garage, because controversy over what had happened at Sepang and Lorenzo's opinions about it all were still front and centre.

Jorge felt betrayed by Yamaha, having won three MotoGP titles with them, and decided to accept an offer from Ducati, attracted by a significant salary and the idea of winning with the very bike Rossi had failed to tame. Jorge spent 2016 feeling like an outsider and preparing for the Borgo Panigale challenge, which began with the winter tests at Valencia and turned out to be a lot more challenging than expected.

2018 - THE MUGELLO VICTORY COMES TOO LATE

Time waits for no man, and Lorenzo was well aware of this. Having battled long and hard with the Desmosedici, things finally turned around at Mugello. Lorenzo rode magnificently, dominating the race and scoring his first win with the red bike. By the end of the season, he'd clocked up three wins, but the Mugello victory was particularly special.

Unfortunately, this first win came a little late, in that Ducati had already hired Danilo Petrucci to take the Spaniard's place come 2019. A furious Jorge made an agreement with Honda. His Ducati adventure might not have ended in the best way, but Jorge did win in a certain respect, as no one had thought he'd be able to power the Ducati to the top step of the rostrum.

In reality, for a large part of 2018, Lorenzo and the Ducati made for the strongest pairing on track, the Spaniard the only rider really able to bother Marc Marquez for the title. At the end of the season, he rode the Honda for the first time and, as they say, the rest is history.