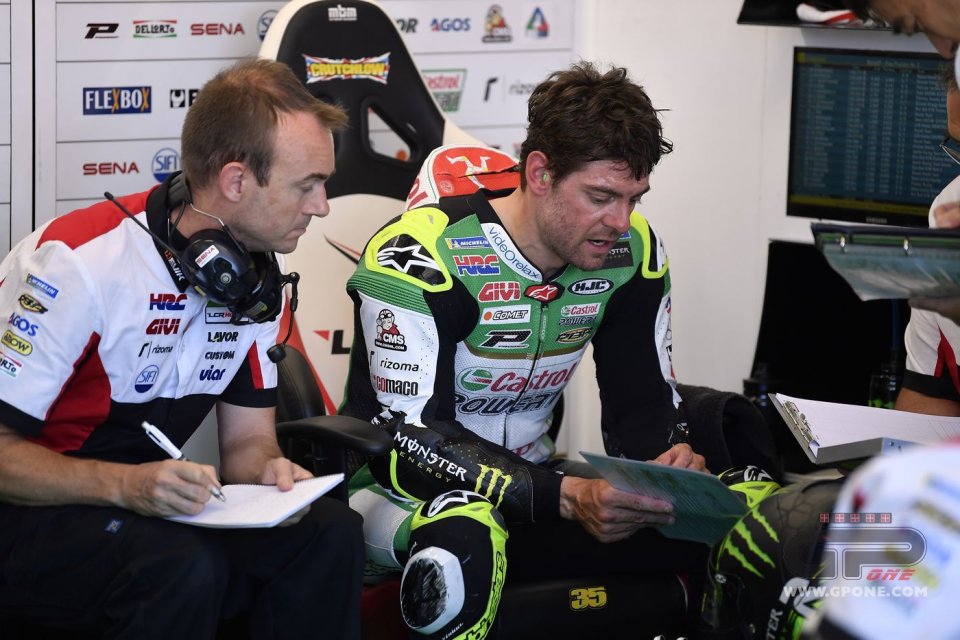 You can say that Honda with Marc Marquez in Misano limited the damage, with a third time almost four tenths behind the best of the Yamahas, Maverick Vinales'. But where is the second RC213-V, Cal Crutchlow's?
The timesheets show: 12th at more than one second from the temporary poleman and seven tenths from Marc.

I'm not worried about not being able to directly enter the Q2, or doing the Q1, since I'm not fast at the moment., explained Crutchlow sincerely. "I have no confidence with the bike, and I don't know why. Normally, tracks with a low grip, such as Phillip Island, Sachsenring or Barcelona are the ones where I'm fastest, but I simply can't go fast here, and I don't know why. And it's obvious that the bike adapts to the track because Marquez is going fast."

It's the usual problem for the Honda riders, with a bike that passes itself off as a super-bike, when it's only actually Marquez who wins.

"It's not like I can somehow copy what Marquez does because it won't work," continued Cal, "because everyone has their own assets. Honestly, we're 4 tenths away. Let's say a tenth per sector... but it's not like I can face Turn 1 and try to gain a tenth there. My feeling with the bike is that I lose half a second in the third sector, but my bike is fast. In other places, like between Turns 8 and 9, I can't get it to rev... but, in the same spot, Marc is fast. So it's hard to complain...I can't say that I lose all that time due to the bike because Marquez is fast in the same place."

Yet, the RC213-V 2019 version competes with Ducati for the record of best motorcycles on the field.

"As far as I'm concerned, the 2018 version, for my style, was better, but I have to honestly say that the RC has improved in many areas this year. Nevertheless, I felt better with the old one. In some circuits, I can do better with the new one but, in others, like Mugello or Misano, no...The 2019 version has a faster engine but is worse in corners and, in some circuits, there could be three straights, but 17 turns!".

Cal is vehement, but he's not looking for excuses. And, in this, he's a true rider from yesteryear.

I'm not comfortable in corners. I'm aware that I have to keep working but, as always, things don't change much during the season and, however, not drastically, and updates are always minimal," he recalled.

"It's clear that Marquez is the best in the championship and that all Honda riders are struggling with this bike. The strange thing is that, in some races, we do well, in others, we don't. We're not consistent. If I always finish fifth, I'd finish third in the championship. Instead, I might get a podium and then come in 13th! But even when Marc has a bad day, he still gets second or third! We can't complain. It's the truth. Marc is very good at riding this bike, which is certainly not fantastic even in his hands, but I don't know anyone else in the world who can ride it like that."

We dare to think that even Jorge Lorenzo realized it. Crutchlow's answer is disconcerting.

"I just don't understand Jorge. I don't understand anything about him, " he pauses, then adds, "It's Marc who makes the difference. That's how it is, and there's nothing else to say. Marc is not only the best of the Honda riders, he's also the best of all the riders in the championship. And it's difficult for Honda to decide to change the bike for us, since Marquez wins with it! The problem is, they're right. If I were the boss at HRC, I'd do the same. But we can't say that the new engine is the cause of the problem because it helps us on some circuits, and we finally manage to maintain the wake of our rivals better."