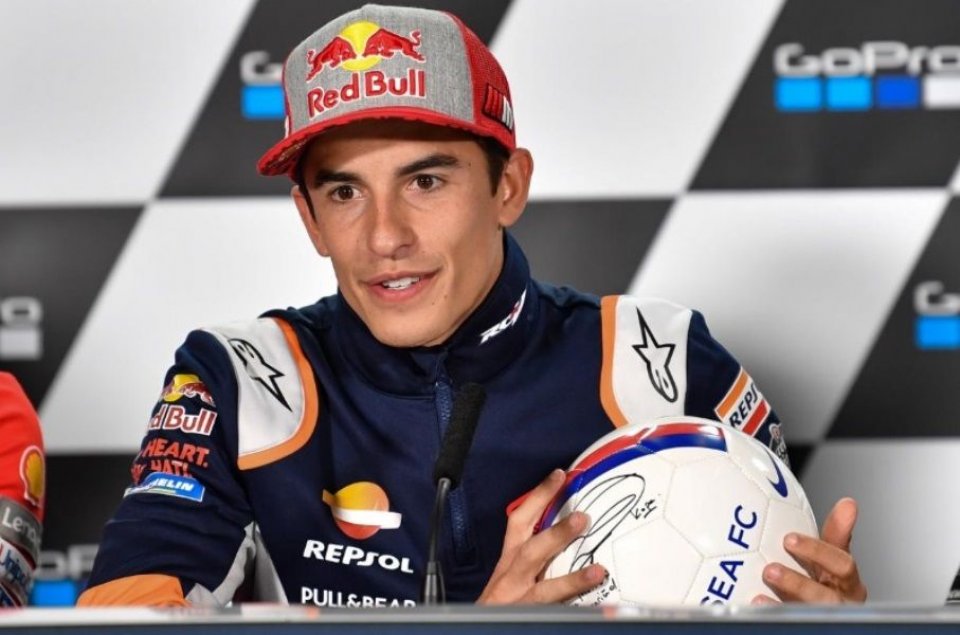 Five years have passed since Marc Marquez's last success at Silverstone. The Spanish rider lands in the United Kingdom with an axe to grind after his victory faded away at the last corner in Austria against Andrea Dovizioso.

It's from there that the seven-times-world-champion's analysis began.

"I had the chance to see that race twice," n.93 began. "I impressed my mistake in the mind, but I'm still satisfied. In the end, it's a complicated track for us, and the Championship remains the priority. Sometimes, to win the war, you also have to lose a few battles, but the important thing is that we still managed to be strong."

There's Silverstone in the present.

"Two years ago, we struggled to fight for the podium. We'll see what the condition of the track will be, but the goal is to reach the top. Unfortunately, we struggle because of the dips. They've been our critical point in the past.”

"I greeted him, I asked him how he was, we exchanged a few words. But, in the end, everyone in the pit-box follows their own path."

Even the Spanish rider didn't miss n.99's words at the conference, when he was pressed on the possibility of a return to Ducati.

"Logically, there are good and bad moments, and maybe you question yourself. At the conference, Jorge preferred avoiding that question. Maybe, the moment you find yourself at home, doubts may arise. In the end, when a rider takes on a winning project like Honda's, you have to follow it.After all, if you're a champion, like what's written on your helmet, you must prove that. When you trust something you must continue with it."

Then the attention returns to the British stage.

"In case of rain, we hope that the track can drain well. We hope that pools won't form because the situation was very complicated last year.

Meanwhile, his brother Alex renewed with the Marc VDS for 2020.

"In the end, I don't know exactly how the situation evolved. Each rider must follow the path on which he feels most confident and be 100% sure, since each of us is different from the other. Alex is working hard for the World Championship and also for the MotoGP. His style has improved, and seeing him in the MotoGP one day would be a dream for me. As I said before, motivations and sensations are very important. In fact, just look at what happened to Zarco."

The Dutch team (which was supposed to run with Tom Toparis and Gianluca Sconza) has postponed its debut in the World Cup due to the financial...
56 min 14 sec ago

Among the other teams, Webike SRC Kawasaki France Trickstar (EWC champions) and Moto Ain (Superstock champions) will use the French tyres
2 days 17 hours ago

He tells of the horrendous crash in which he nearly lost his life and recounts tales of gangsters, glamour models and glory in one of the most...
3 days 2 hours ago