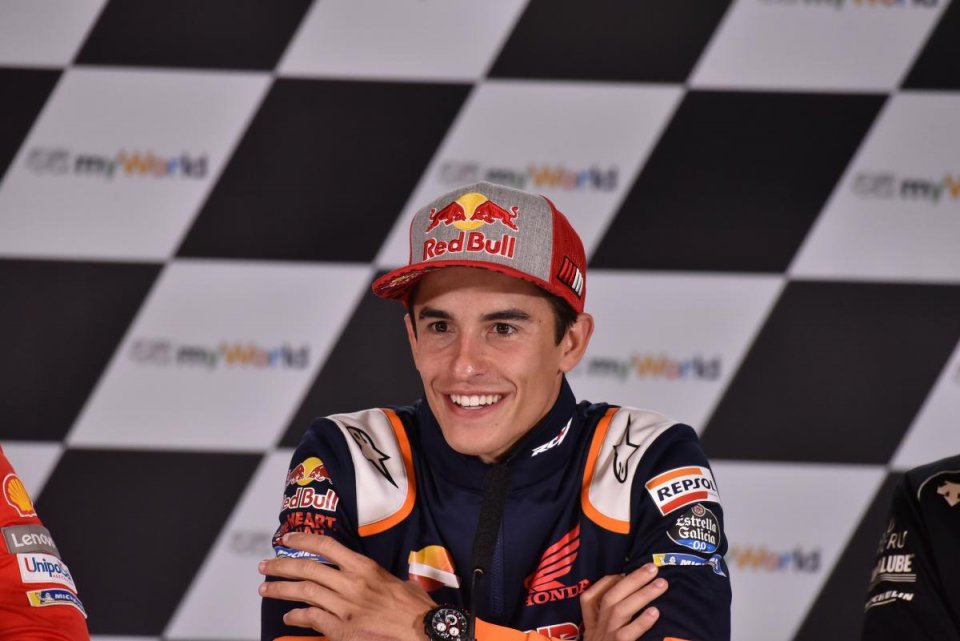 Marc Marquez arrives in Austria in full control of the championship, and is happy to let someone else fill the news right now. That someone is his team-mate Jorge Lorenzo, still out due to injury but a real diamond on the market, at least following the rumours that team Pramac wants him next year.

“That's the rumour yes, but he has a contract with Honda and knowing his pride, he will want to win on the championship winning bike. This is what he's wanted ever since signing the contract, he wants to prove himself with this bike rather than run away. Today he's my team-mate, but I wouldn't bet on his leaving".

What is certain is that Lorenzo has had various difficulties with the Honda so far, the same bike with which Marc has been dominating for years.

“The Honda is a bike that needs the best possible set-up to be quick, you have to be 100% physically fit to ride the bike. There are many factory that don't apply with other bikes, but as the results show, the bike is capable of winning five titles in a row”.

Lorenzo's move to Ducati could open up new scenarios, in which Alex Marquez could also play a part.

“I always say that Alex needs to prove himself on track, he's doing that right now and so it's normal that some MotoGP teams are interested in him. Alzamora is working on it, we'll see what happens”.

Back to the racing and for #93, the Red Bull Ring is the only track he's never won at.

"I like this track even if it's the only won I've never won at, and I hope to be ready to fight this weekened. Up until now, Ducati has dominated here, but I think Yamaha and Suzuki will be up there this year too. Now I can count on a more powerful engine, and we have homologated the new aerodynamics that we tested, but I think acceleration is most important”.

A win in Austria would be another step towards the only riders to have won more than Marquez, or rather Valentino Rossi and Giacomo Agostini.

“Records are important but championships even more so. Sure, positive stats show that you're doing a good job, and seeing my name among the legends is great. In any case, I want to maintain the mentality I've had until now, remaining focused."

Yamaha hasn’t yet figured out the M1 engine's problems, but Franco in Brno mounted his last available one, Rossi and Quartarato at their 4th
4 hours 50 min ago

Marco finished Race 1 in 17th position in Portimao: "I couldn't stop the bike, I have to try to keep my morale high."
10 hours 15 min ago

1-2 for the new CBR with his brother Glenn, third Brookes on the Ducati, technical problems for Barbera. Tomorrow more of the same with Race 2 and...
21 hours 49 min ago

The German rider is better even though he has suffered a major trauma, fortunately without suffering neurological complications. He will be operated...
22 hours 6 min ago