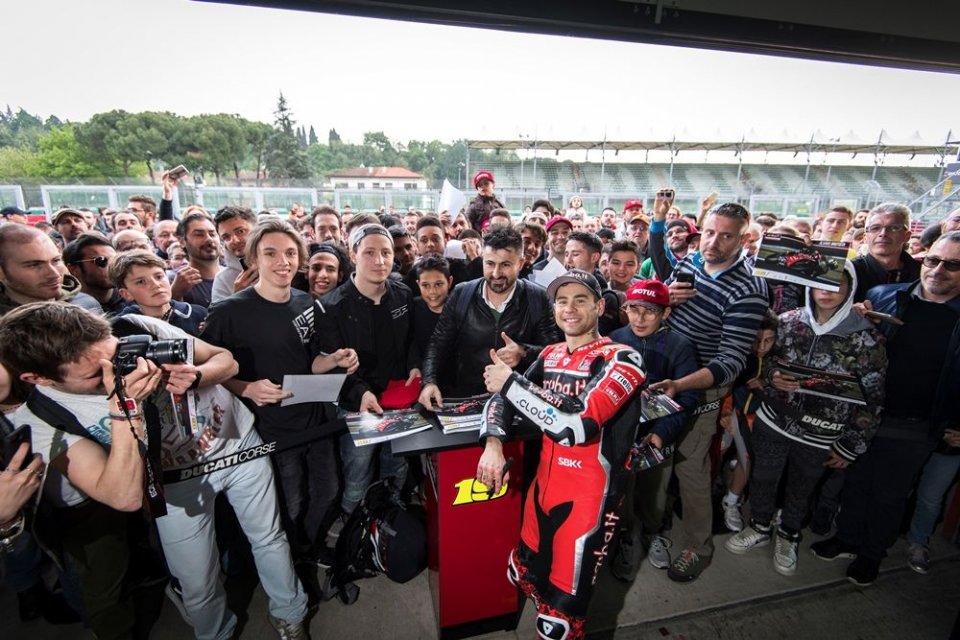 World Superbike will be back in action on 10 May, at Imola, so it's best to be prepared for the Italian event. The Santerno round is in fact a home race for Ducati, the team therefore having no intention of letting its fans down.

For this reason, the Aruba team was out testing at Imola this week with riders Alvaro Bautista and Chaz Davies. The test marked the Spaniard's very first visit to the track.

“Today was a really positive day because I had a chance to test at Imola, a track I’ve never been to before - comments Alvaro - Now I’ve got some markers for the race weekend, which is the most important thing, and also I have to say that we were lucky to have the rain towards the end of the test because this allowed me to lap in the wet for the first time with this bike and these tyres."

Bautista thus ended the day with a smile on his face, also because it gave him a first opportunity to ride in the wet.

“I’m very pleased because I started becoming confident with the bike also in these conditions, which are the only ones we haven’t encountered this year. I want to thank the Autodromo di Imola and all the fans who came here despite the bad weather, let’s hope we can also arrive at a competitive level during the race weekend.”

The fans were also on hand to support their riders, the central grandstand open to the public for the occasion. Chaz Davies was also present and correct.

“Today was not so bad, although it took a while for the track to dry out this morning - stated the Welshman - then we got some laps this afternoon and we were getting some decent data. Unfortunately, the day was cut short by a bit of rain but we still got some useful information here for the race, just to short cut the learning curve in the weekend."

Chaz's mind is now on the upcoming May event.

“There are still a couple of question marks over some changes we made today, which we were looking to verify before the rain came, but overall the feeling is not so bad. I’m looking forward to racing here in front of the home crowd in a couple of weeks. Imola is always a special place, and the fans here are so enthusiastic.”​​​​​​​