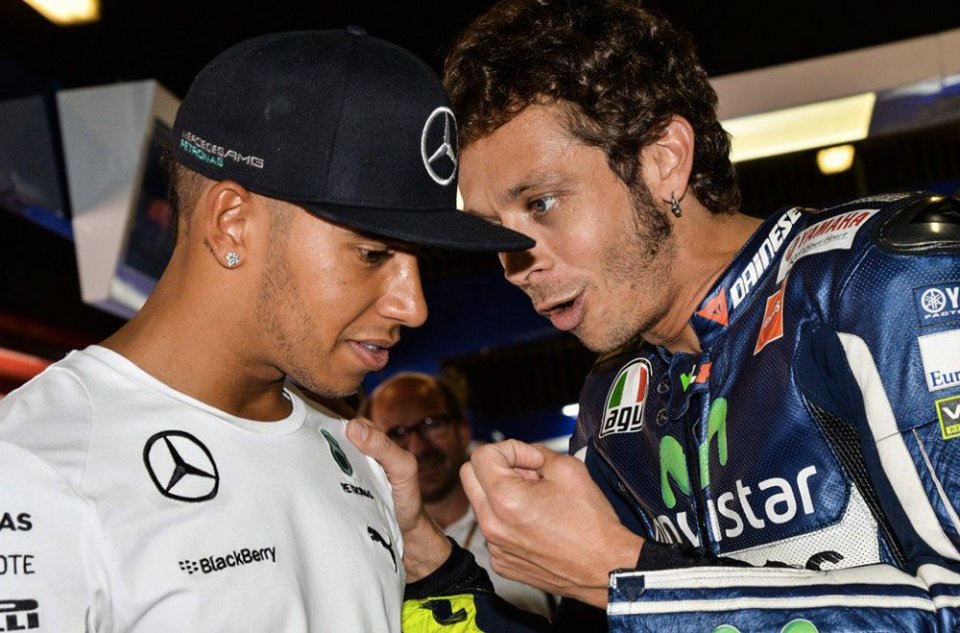 He is expected Saturday morning but he won't wait for the Qatar race, although he'd surely like to, knowing his passion for MotoGP.

Lewis Hamilton, 5-time F1 world champion, dreams of riding one of these two-wheeled beasts and, for this reason, he'll be in the Yamaha garage to meet with Valentino Rossi and define the final details of a legendary operation: a never before seen exchange of vehicles.
Mercedes and Yamaha are in agreement and will lend the two champions their respective weapons.

Valentino will drive the silver dart, the F1 W10 EQ Power+, while Lewis will climb on board the 2019 M1.
Lewis won't be starting from scratch though, as he recently rode a Yamaha R1, in its Superbike configuration, at Jerez, with the Lowes brothers, and before this, he even went to America for an on-track session with Cal Crutchlow showing of his riding skills, despite him himself referring to the MotoGP riders as his heroes.

Rossi also has something of an advantage, having already driven the Ferrari F1 car at Barcelona and Mugello, with excellent results, so much so that in 2006 there was talk of his possible move to the four-wheeled world.

Vale and Lewis met for the first time at Le Mans in 2013, and then on many other occasions, Vale going so far as to invite Hamilton to his Ranch in Tavullia for a Flat Track session.
A meeting that is yet to happen, hard as it is to schedule with the conflicting calendars.

There is no fixed date for this legendary vehicle exchange either, but it could only happen after the final GP in Abu Dhabi on 1 December. With 21 F1 races on the calendar, there is little room to manoeuvre.

The initiative's promoter is probably Monster, though the idea also appeals to Petronas that is on both the satellite Yamaha team fairings and the sides of the Mercedes.