For Honda, winter was not at all simple. First there was Marquez's surgery, then Lorenzo's injury complicated the work in the (few) days they had for the tests. Despite everything, the Japanese technicians seem to have done their best to work out the kinks in the RC213V and live up to the standards of the best competition, even at top speed.

Now it's all in the hands of the dream team formed by Marc and Jorge with the first test in Qatar. Actually, Losail was never really nice to the Honda, and it's no coincidence that Marquez won in MotoGP only once in the desert. Instead, the Mallorcan did much better with 3 successes in the premier class, but with another bike.

Regardless of the statistics, the biggest question is if the two riders are physically fit to face this new season.

"It's finally time to race, again," said Marquez. "I spent a different winter than usual because of my surgery. I worked hard with 5 hours of physiotherapy a day and one goal in mind: to be in the best conditions at the first race of the year. In the tests in Qatar, I felt better than in Malaysia, and I can now say that I'll be almost 100% in shape."

Without a doubt, this is good news, after so many months spent in the gym. If his shoulder is no longer a problem, the same can be said for the RC213V.

"Honda worked hard to improve the bike, and I felt strong in the tests, especially on a circuit like that at Losail, which has never been the best for us, but we have to keep on making progress," is the world champion's opinion. "The GP in Qatar is always special, not only because it's the first of the year, but also because of the conditions that must be faced. We'll pay particular attention to the temperatures, and we'll consider every aspect before the race."

LORENZO: IT'S THE START OF A NEW ERA WITH HONDA 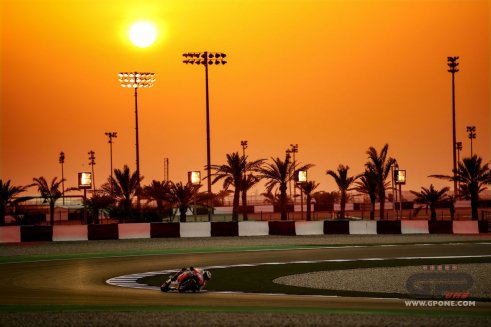 dominant,  this feeling is undoubtedly amplified for Jorge Lorenzo who is  wearing the new Repsol colors. The rider from Mallorca had to  skip the test at Sepang, and he needs time to get to know the  new  bike, as well as  deal with a recently broken wrist, but this  doesn't discourage him.

"Being on the Qatar lineup is something that I imagined for the  entire winter," he confessed. "This is the beginning of a new era  for me and for the team. A special moment. I'm ready to give it  my all to achieve the best possible results with Honda."

Jorge's tenacity is beyond dispute.

"Unfortunately, I'm not at my best on the bike, but I still think I  can get a good result in Qatar," he continued. "Every year, the  MotoGP seems very competitive, and I certainly have everything  I need to fight for the best positions after a while. I know we can  do great things."

"I was slow last year, but now I have everything I need to stand out. I wanted to win in Qatar, but a fourth place means a lot to me."
2 days 10 hours ago

As the situation remains in a state of constant evolution, new dates for the French GP and the recently-postponed Gran Premio de España cannot be...
3 days 17 hours ago