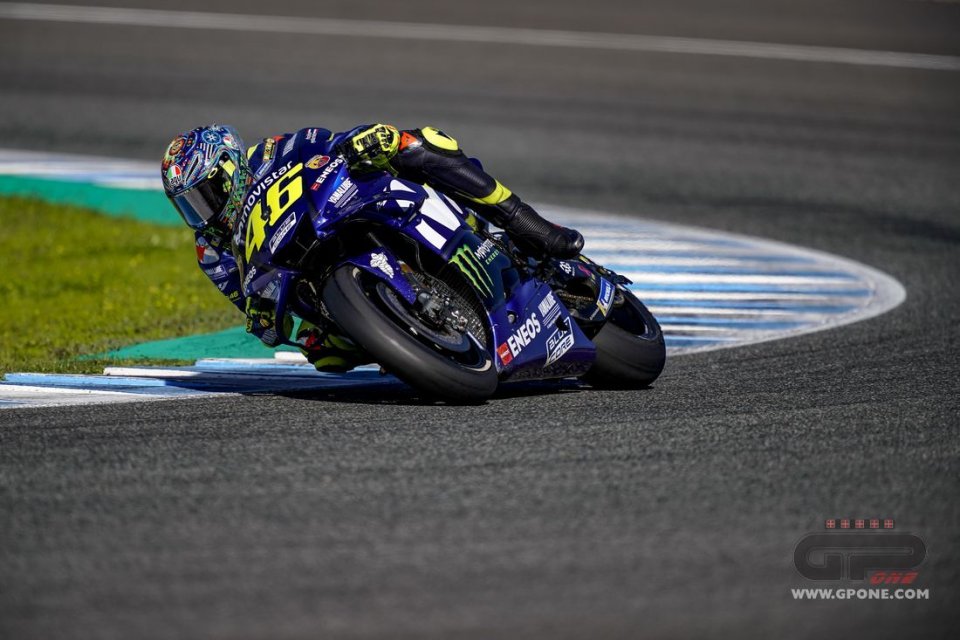 Valentino Rossi, at the end of day one of testing at Jerez, is not in a good mode and not only because of his 17th place finish. Yamaha has brought the new engines, already tested at Valencia, and the answers the Doctor has received are far from encouraging. While Vinales appears enthusiastic, Valentino is of the opposite opinion.

“I've continued to test the two different engines, making some comparisons, but I don't feel much difference with respect to this season. If I compare us to the best, our level is similar, if not identical to that of 2018”, he comments.

Vinales appears keen on one of the two engines, the one with more engine brake…
“In general, I agree with him, I prefer that one too, apart from a couple of small modifications. It's a clear choice, but the problem is that the others are faster, we haven't taken that step forward that we need".

With respect to the race, you too have improved…
“Yes, but only because temperatures are lower and everyone's quick at Jerez in winter. I couldn't use the new tire because, during that exit, i heard a strange noise coming from the engine and so preferred to stop. The pace is better than my position, I need to check the times but I think the two Ducatis, Marquez and the Suzukis are all better than us in terms of pace”.

Will you ask Yamaha for a new engine for the Sepang tests?
“I don't know what will happen, I don't know their plans. I'm simply a realist and we have to realise that we're not fast right now”.

What is the current level of the M1?
“6th or 7th place, 4th if someone crashes out of the race (he smiles), we definitely can't fight for the win with this bike. It should be clear that what's been done is not enough. With fresh tyres, it's all ok and we can be fast but we start to suffer after just a few laps”.

Something we've already seen…
“Riding sensations are a little better, like at Valencia, but it's not enough. The more miles we cover during these tests, the more the others improve”.

Are you angry?
“No, I'm simply describing the situation. The Ducatis were impressive today, Bautista too, who's just had two days on the Superbike, he was quicker than us. I'd say it's worrying”.