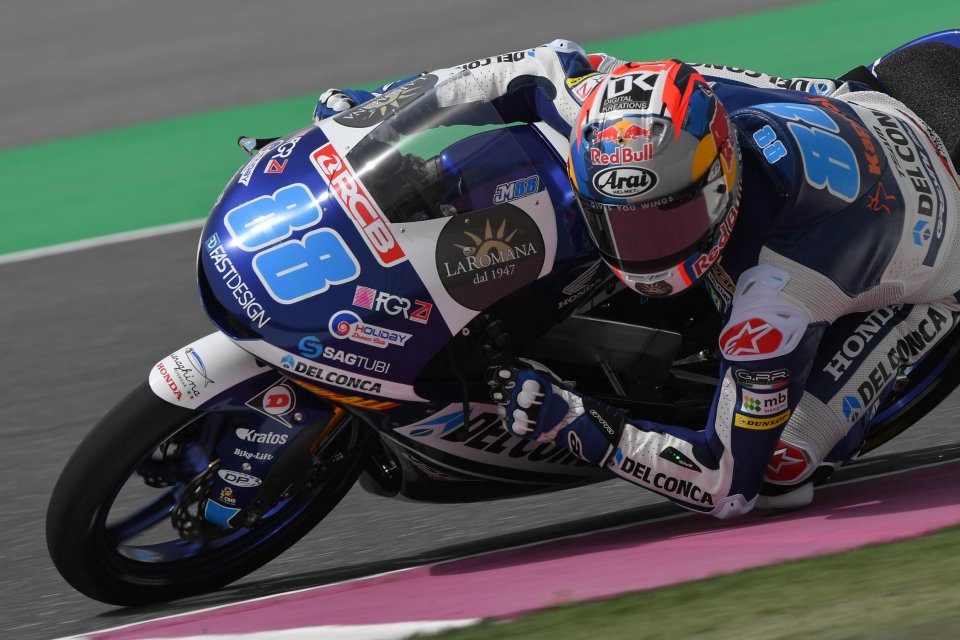 He was without a doubt the favourite for the win and he lived up to the expectations. We are talking about Jorge Martin who, after missing pole position by a thousandth of a second, redeemed himself by taking home the first 25 points of the season, becoming the first rider in Moto3 history to win the final race of the previous season and the first of the next. “I pushed hard from the start, but when I saw others close to me, I tried to relax. In the finale I tried to hold something back so I could give it all on the last sector and I succeeded in bringing home the result that I wanted.”

The Spaniard led the race almost from the start, with Aaron Canet as his only real adversary; the team Estrella Galicia rider intelligently stayed on Martin’s pipes all the way to the end, unable to take the win by just a few thousandths on the final straight. “I am very happy about the final result – Canet recounts – although I needed something more on the straight. In the first part I stayed at the back of the group and then I pulled the pin. My strategy was to pass Martin on the straight, but I wasn’t able to do that; in any case, it is the first race, so I am happy with the position.”

Completing the podium for his first time was Lorenzo Dalla Porta, skilfully overcoming a thick crowd of rivals in his début with team Leopard during a mad final lap in full Moto3 style. “Last year was hard for me, but today everything is fantastic. In the next race I want to stay with the lead riders; we’ll pick up from here to do increasingly better. I would like to truly thank everyone, starting with the team.”

Another Italian finished at the foot of the podium, namely Niccolò Antonelli who, after a back and forth race, managed to come back and miss the podium by just a few thousandths. Behind number 23 were Rodrigo and Di Giannantonio, who rode a great comeback from the 16th spot on the grid. Finishing behind the Roman were Toba, Sasaki, Kornfeil and Migno, making his team Aspar début.

Marco Bezzecchi has something to complain about after crashing while battling for the podium in the end, but in any case he was able to finish 14th, whereas Enea Bastianini did not see the chequered flag: number 33 had stayed in the lead with Martin and Canet until crashing out on turn six in the first quarter of the race. The same fate for Nicolò Bulega, crashing on turn two at the mid-race point, while Foggia and Arbolino finished the race respectively 16th and 17th.

Among the other teams, Webike SRC Kawasaki France Trickstar (EWC champions) and Moto Ain (Superstock champions) will use the French tyres
1 hour 17 min ago

He tells of the horrendous crash in which he nearly lost his life and recounts tales of gangsters, glamour models and glory in one of the most...
10 hours 8 min ago

VIDEO - The two brothers will wear special graphics to show their solidarity at this time. Helmets, gloves and boots will then be auctioned off for...
1 day 7 hours ago

The Dutchman: "In the afternoon I had some problems with front end confidence"; Razgatlioglu: "Too many things to try confused me; my head is...
1 day 18 hours ago

The Circuit of the Americas has made it official: no US race for this year
1 day 21 hours ago

The young rider was transferred to a ward at the Meyer hospital in Florence. She fractured her pelvis at Mugello during the first CIV test but will...
3 days 6 hours ago