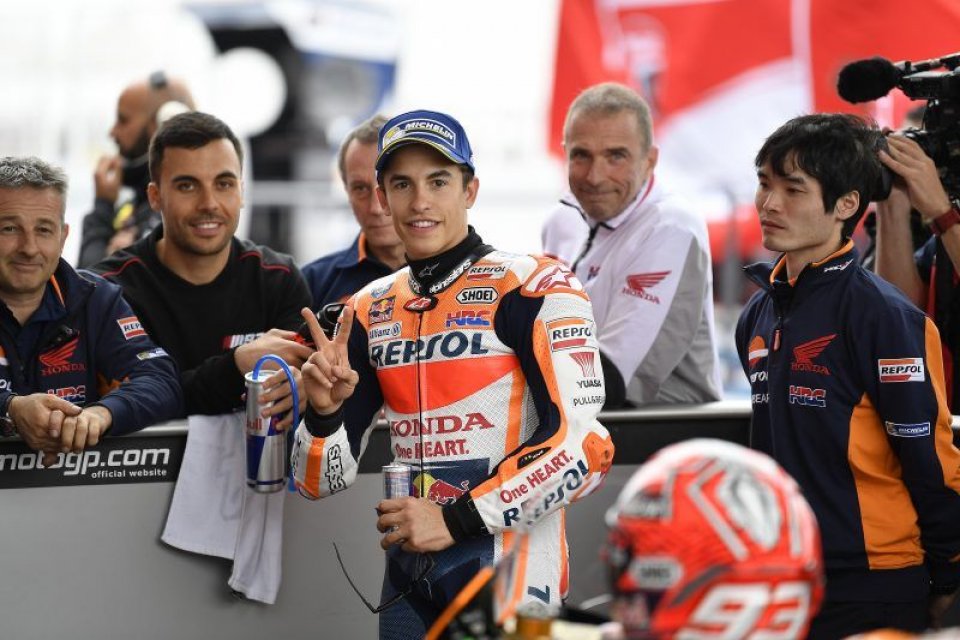 Saturday at Rio Hondo has highlighted the talents of Marc Marquez and the Honda. In far from simple conditions, the Spaniard proved impeccable, scoring his fourth consecutive pole in Argentina: “I was hoping for a dry session to work on some solutions ahead of tomorrow – he commented - I had chance to understand the engine and bike anyway, despite the fact it's still struggling a little in acceleration. Tomorrow we hope for a dry race, it will important to take the right direction in terms of tyres. Right now, I'm quite confident – he added - perhaps I'm losing something in T2, but I've been able to improve my riding style”.

The Spaniard know that he needs to take a step forward: “Tomorrow I have to be careful as to race management – he reveals – unfortunately I'm suffering with the electronics, I have to find the way to improve through some corners. I could also do with a dry warm-up, because we have a few things to assess. I was thinking to use the slicks for the race but Santi Hernandez told me I would risk crashing and hurting myself”.

The five-time champion has a special bond with Rio Hondo: “I've always got on well at this track since 2014  - he commented - this year there are some bumps. Compared to the past, it's difficult to choose the right setting. I think I can fight for the podium, I don't know about the win. Vinales has good pace, but also the Ducatis, as well as Cal and Dani. Unfortunately we don't know a lot about the tyres, it will be key to make the right choice”.

Marc also touched on the fourth tyre brought by Michelin: “We know we have three front and three rear tyres available as per the regulation. For some reason, Michelin allowed this extra tyre, which we talked about in the safety commission, without any of us knowing about it In addition, the 14 riders present all agreed not to use it. I think it was a technical decision and also a safety issue. Perhaps it's better to try it during a test. I also complained about the compound in Qatar, the extra tyre may well suit my style, but here in Argentina we don't have time to use it”.

Alongside Marquez is Karel Abraham, who will start from second tomorrow: "Argentina is one of my favourite tracks – he revealed - we worked well in every session, using different tyres. At first I was nervous because it was the first time I tested the Michelins in these conditions– he underlined -  in addition the track wasn't fully wet. It's an unexpected result, because we've suffered in the past. This is definitely that best result I could have achieved. I've been getting on well with this bike ever since Valencia, improving at every track”.

Cal Crutchlow is also on the front row: “Today wasn't easy, the team did a great job. It's the first time I rode with this configuration and I don't even think it was the best setting, but i'm competitive in terms of pace”.

Cal is feeling confident: “I think it's important for Honda to have two riders up front. In these conditions there are definitely more risks, but I think I can be competitive in the race. Perhaps not fighting for the podium but definitely for top five”.

The Honda rider also touched on tyres: “When we arrived we had three tyres to use, rather than four, and I don't think there's anything to gain. Some riders complained about the soft tyre, but it wasn't possible to bring another for timing and logistical reasons. I ask myself when we could have tested it? It's something to evaluate in the future ”.