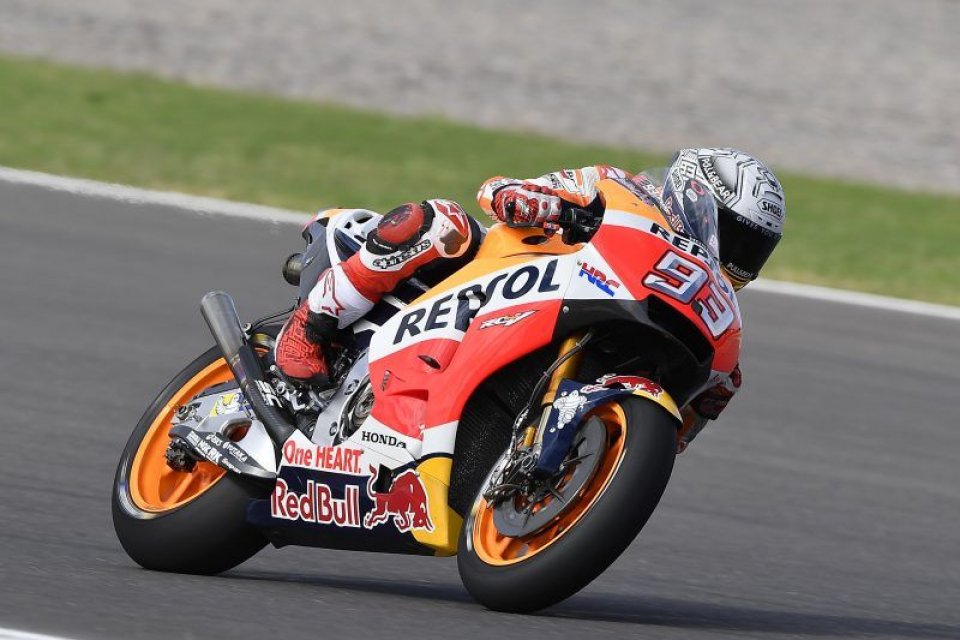 There was some light rainfall as qualifying got underway but the track dried out in a matter of minutes. No-one trusted the slick tyres though, going instead for the rains. Among the many unknowns, Marc Marquez has proved to be a cert, putting on a phenomenal performance in qualifying at Rio Hondo.  The Spaniard set a stunning time, stopping the clocks on 1’47”512.

The HRC rider was the only one to duck under 1’48, putting the rest of the pack firmly behind him. A clear response from the five-time champion, after a Saturday that saw him chasing Vinales: “The rain helped, as in the dry I would have surely struggled – explained Marc – maybe I would have been on the front row, but probably not pole. With the new tyre, I can't be as competitive as I'd like. Tomorrow we need to take a step forward with the aim of fighting for the podium”.

We've mentioned Vinales. The Yamaha rider did not have the easiest of sessions, especially after what we'd seen from him in practice. Maverick has to settle for the second row, more than a second and a half from the #93 Honda (+1.706). An enormous gap that leaves many open-mouthed after Friday's performance.

The surprise of the front-row is Abraham (+0.763), seven tenths from the Honda. His is the best-placed Ducati: “I've always liked this track -commented the Czech rider –  I was also competitive yesterday. I was a little worried at first maybe – he revealed - seeing as I'd never used the Michelins in these conditions before, but I'm pleased with my performance”.

In third place is Cal Crutchlow on the Honda. On his last attempt, the Brit was able to move ahead of the Ducati Pramac of Danilo Petrucci. Just 0.003 separates the LCR rider from Abraham: “It was clearly a tough day compared to yesterday– explained Cal – maybe I'm not totally happy with my lap; I could have done more. On Sunday I'll try to be competitive, there are various satellite Ducatis that are quick, as well as Dovizioso. He's starting further back but will move up, unlike Lorenzo perhaps”.

Daniel Pedrosa will also start from the second row, between Petrucci and Vinales, while Valentino Rossi had to settle for seventh (+1.760). The Doctor is more than a second and a half from the front, having set the second fastest time in Q1. Alongside him will be the Aprilia of Aleix Espargarò (+1.811) and Loris Baz on the Avintia Ducati (+2.118). Only tenth for Andrea Iannone, preceded by Bautista and Folger.

Surprisingly, Andrea Dovizioso didn't reach Q2. An incorrect strategy for the Italian, who was passed by Pedrosa and Rossi in the final stages. Tomorrow he will start from thirteenth place, Lorenzo from sixteenth position. 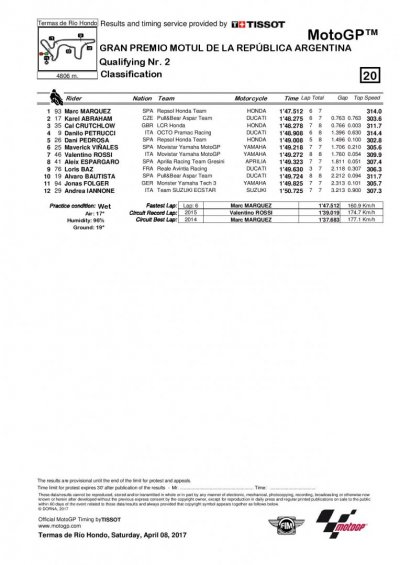