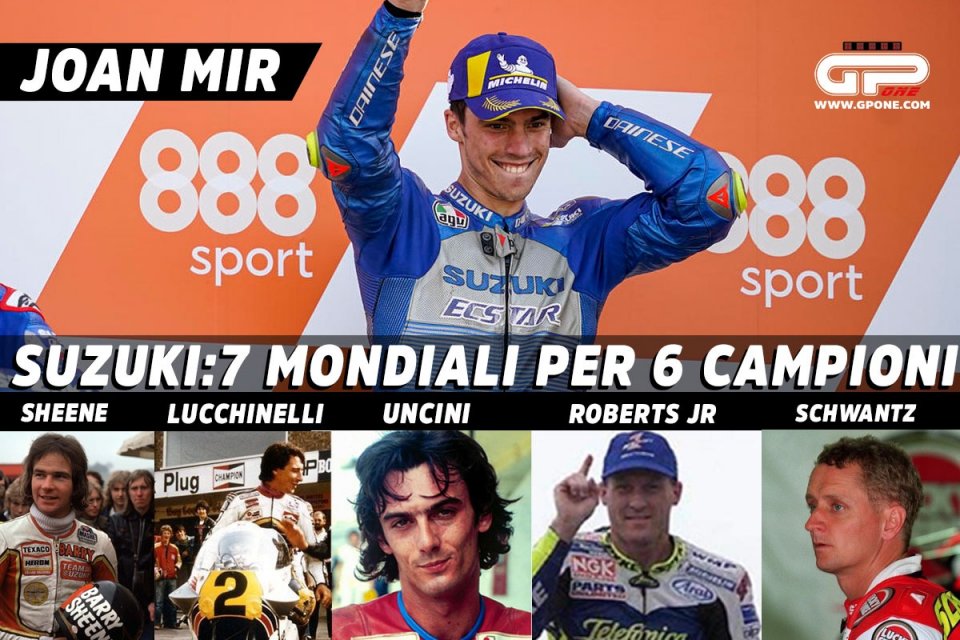 Barry raced with Suzuki GB, Marco and Franco with the Gallina team, Kevin Schwantz and Kenny Roberts with the works team which, in Junior's case, had the support of some of Roberts Senior’s technicians, such as Warren Willing.

Let's say right away that we are talking about very different bikes: if in fact at the end of the ‘70s they raced with the RGs in various configurations, ‘square four’ rotary valve-inducted, which were then the bikes preferred by private riders, Kevin and Kenny Jr. already had V-engines, albeit always two-stroke.

But today we don't want to talk about technology, but about men with some short portraits of Joan Mir's five predecessors. 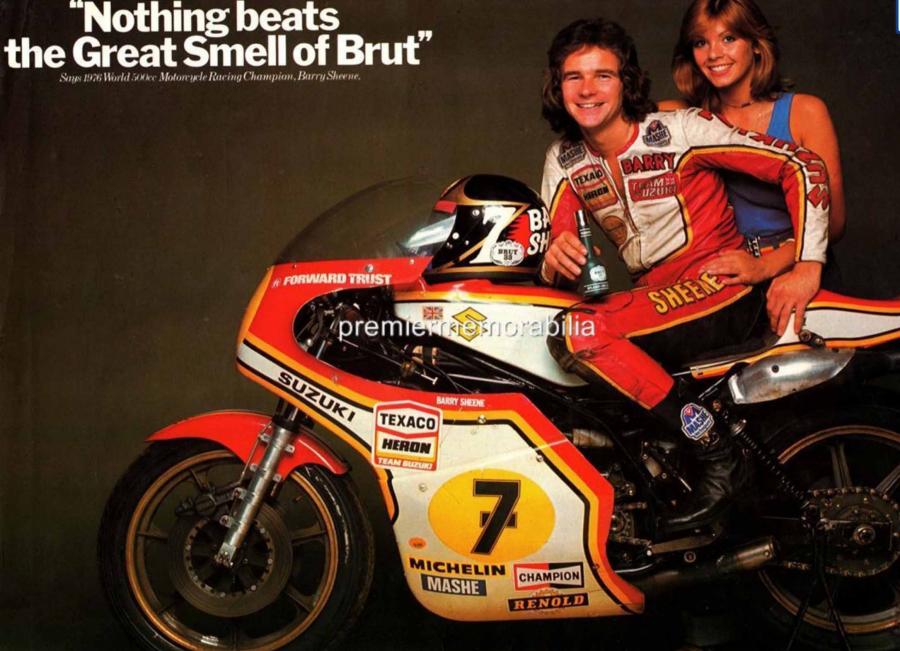 Sheene: outgoing, likeable and crafty, he was the Agostini of the end of the 1970s

Barry succeeded 'Mino', who the previous year had won the world championship with Yamaha, ahead of Phil Read's MV Agusta. While Giacomo had been the first modern rider of his era - he arrived at the races with a coach, not with a camper, he took part in films and photo novels, he was a poster boy for advertising on TV and always surrounded by beautiful women - Sheene was his perfect follower: with relative differences in character. Ago did not flaunt it, Barry, the child of the era, lived a life apparently more exaggerated. And while in Piccadilly Circus there was his advertisement with Brut by Fabergé perfume, he loved being photographed with his Rolls Royce with the 4 BSR license plate that flaunted an irreverent "Helicopter pilots get it up quicker" sticker, in memory of his great passion. And it was not uncommon, at racing, to find him surrounded by his great friends, James Hunt and George Harrison.

With his inseparable number 7 (the first rider to choose a number for himself) and Donald Duck on his helmet Sheene won his first title in 1976 with 5 victories and a second place in a 10-race championship; the second the following year with 6 wins out of 11 Grands Prix.

Then, from 1978 to 1980 he found himself up against Kenny Roberts and his Yamaha, four cylinders and Power Valve technology, and had to settle for second place ahead of riders of the calibre of Johnny Cecotto, Wil Hartog, Takazumi Katayama, Hennen, Baker, Lansivuori . Those were still the years of the Continental Circus where, depending on the results, maybe a couple of 'official' cylinders or some good tyres could be obtained. 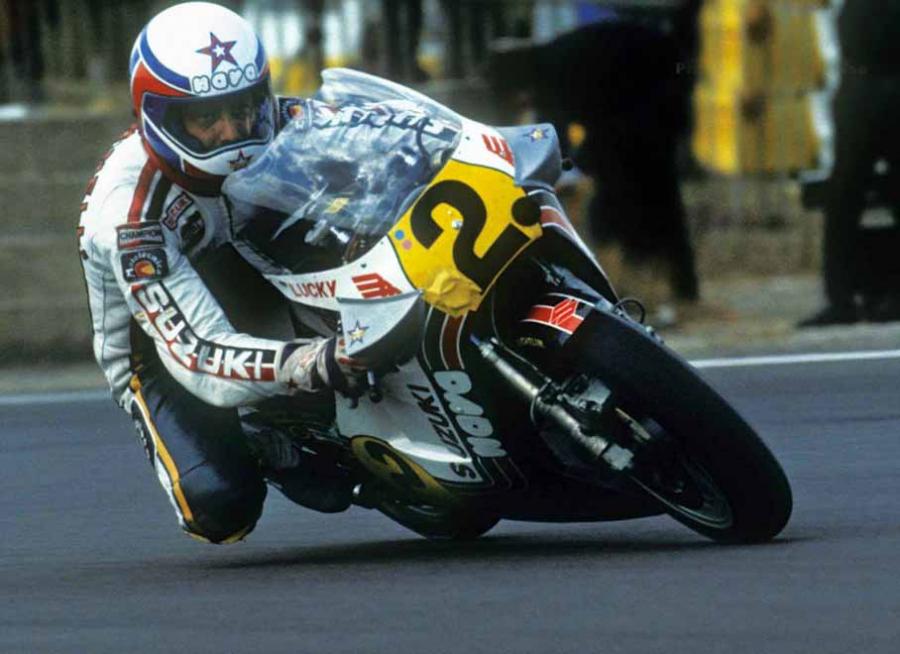 Lucchinelli: Roberto Gallina, the 'lucky star' of the daredevil of Ceparana

At the end of King Kenny's triple success, Roberto Gallina had gained the trust of Suzuki, after taking it to second place in the world championship with Virginio Ferrari, following his bad accident at Le Mans.

His team already at the time had an exceptional organization, complete with Hospitality: a coach from a shipyard turned into a camper, with beautiful interiors and an outside tent used as a restaurant where Gabriella, Roby's wife, was in charge.

Marco, not surprisingly a great friend of Barry, shared his lifestyle, if possible, much more exaggerated. And while Sheene smoked Gauloises rigorously tearing off the filter, having his final puff on the starting grid, Lucchinelli was no different. Needlessly held in check by that saintly woman of his fiancée, Paola, who tolerated his exuberance knowing that it was the only way to keep him close.

It was a nice bunch of guys, together with Marco Lucchinelli: there was Barry, Angel Nieto, Gianni Rolando. Lovers of life, beautiful women and bikes, but not necessarily in that order.

Lucky, that was the nickname he gave himself, sang "Stella Fortuna" in the San Remo Festival - his hit record, but also – “I wanted my real woman black, all transparent, hot and exciting” - the theme tune for Sport in Concerto. He played at being a rock star and enjoyed breaking every rule in the book.

In the world championship Marco had already won a Grand Prix, as a privateer, at none other than the old Nurburgring, the 22.8 km long ‘Green Hell’, in 1989. The year of the title he won 5 races, out of 11 GPs, relegating Randy Mamola to second place with the same bike but managed by the British importers, with Roberts third ahead of Sheene, who had also moved to Yamaha.

Kenny Roberts, who was not exactly a boy scout himself, in comparison with Marco was a bit of a hillbilly and often shook his head good-naturedly, laughing at his excesses, but as a racer he respected him. 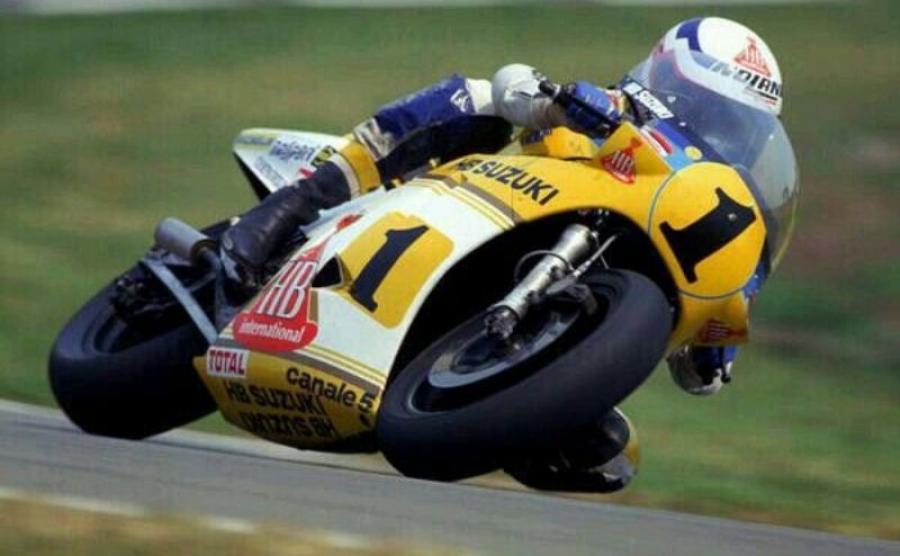 Uncini: from the devil to holy water

Lucchinelli's decision to switch to Honda, which had offered him its new three-cylinder, allowed Franco Uncini, already the best privateer in 500cc, to accept Gallina's offer. Franco came to the races with his father, Ennio, his brother, Henry, a car driver and family friend and personal sponsor Livio Stefanacci. We forgot: there was obviously his personal mechanic, Mario Ciamberlini, a mechanical wizard. With this clan Franco, who had taken his first steps in competitive motorcycling, first with a Laverda SFC and then with a Ducati 750 SS in Bruno Spaggiari's team, winning everything there was to win before moving on to 250 and 350, clinched the title with 5 wins and two third places, out of 12 races.

We can say that Uncini was the exact opposite of Lucchinelli, on the outside. But we are still in the early ‘80s and even Franco was capable of hiding in the closets. At the time, there were no quiet types. The ‘Recanati’ school of poetry gave us Graeme Crosby, Freddie Spencer, Kenny Roberts, Sheene, Mamola and Katayama. There were no second-raters around at the time. 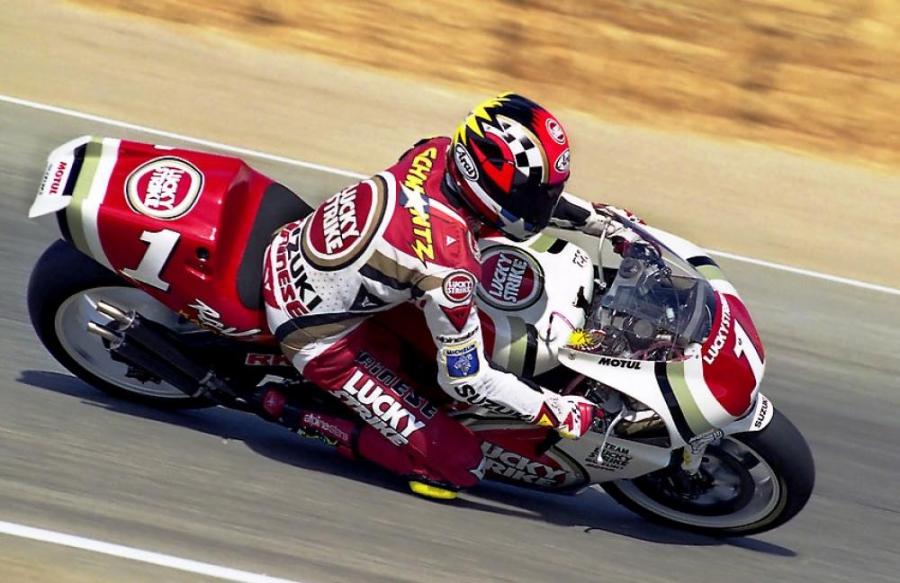 Ten years later, or rather 11, for Suzuki it was the turn of a Texan with an inexhaustible talent: Kevin Schwantz, whose #34 is just as famous as Sheene's #7.

Kevin arrived in the world championship in 1986. He was introduced to us at Assen by the then Suzuki Britain team manager, Garry Taylor.

He was a lean and lanky kid in tattered light blue overalls that were a portent for his strenuous riding style. In that race he crashed, between practice and race, several times. The enemy (agonistically speaking) of Wayne Rainey in the States, he went on to replicate their legendary rivalry in the world championship.

He won the title in that fateful 1993 season, the year of Wayne’s misfortune at Misano, with 4 wins, 3 seconds and 4 third places ahead of Rainey, Darryl Beattie, Mick Doohan and Luca Cadalora.

At the races Kevin was always accompanied by his father Jim, and his mother, constant but discreet presences, in the paddock and in after practice or the race, as in the case of Barry Sheene, it was not uncommon to be invited for a cup of tea.

Of all the Suzuki champions Kevin Schwantz was undoubtedly, together with Barry Sheene, the most iconic, especially for his “do or die” riding style which resulted in as many crashes and fractures as his 25 Grand Prix victories. All on Suzuki. 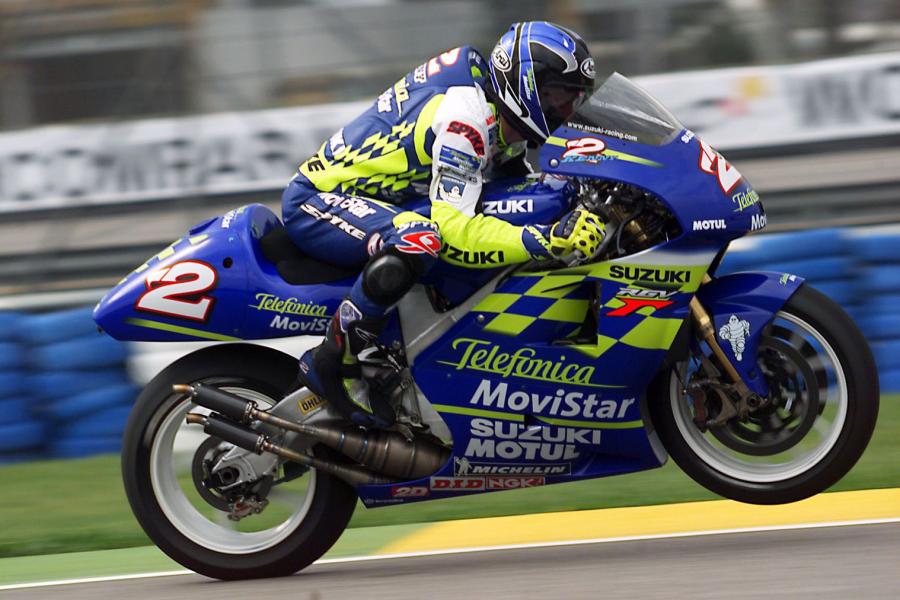 Roberts Jr.: the heir to the ‘King’

While King Kenny had dominated in his era, Junior – who was born into the profession and was a kid on a bicycle in the paddock during his father's glorious years - paid his dues, starting from 250 (three seasons, from ‘93 to ‘95 ) before arriving in the premier class first with Yamaha, then for two years with Kenny Senior's Modenas three-cylinder machine before joining Suzuki in 1999.

Junior, however, unlike Kenny Senior, who on his European debut was rather ... grumpy, showed character and riding skill. He was for sure a Roberts, but was definitely made of sweeter stuff. Not surprising seeing as he had practically lived his entire childhood and adolescence in the paddock.

King Kenny was never over the top with him, but he helped Suzuki by providing him with men of great experience and genius like Willing. And underneath, well hidden beneath his gruff skin, he was very proud of his son who also wore the American eagle on his helmet.

After the title, in 2000, with four wins and four second places in an incredibly rainy year of 16 races - his favourite terrain – KR Jr. raced until 2007, the last two years with the KR211V, a prototype with a five-cylinder Honda engine . Then he retired, spending a sabbatical on the roads of America, traveling with his family in his motorhome.