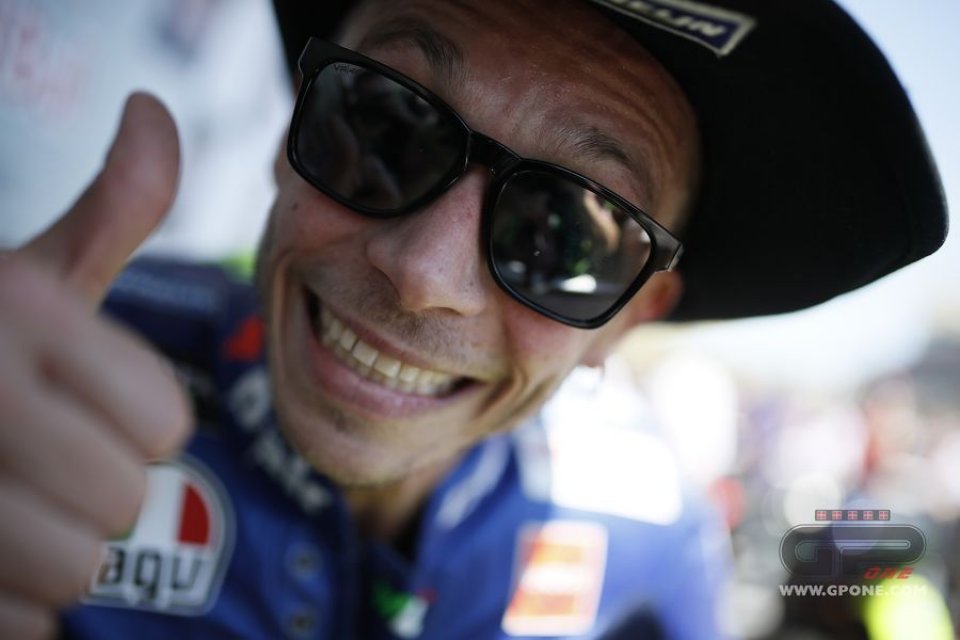 This is not a politically correct piece. If you're one of those who thinks journalists always exaggerate, or if you see things through rose-tinted glasses, or if you think titles are often misleading, don't read on. Move along. This isn't for you.

We simply want to explain why this is the year of Valentino Rossi. The year in which he can win the blessed 10th title. Now or never.

Why are we so sure? It's simple: we're not paid to go around the world and put press releases into Italian. Neither are we paid to lap up all the idealism that oozes from all human activity nowadays, sport included.

We are here to talk about what sport really is. A war without arms. Subjugation. The victory of one, the defeat of others. What makes the adrenaline pump in the veins of the main players.

And we are convinced that this is the perfect year for the most ferocious animal that motorcycling has ever seen. More cutthroat than Phil Read, badder than Mike Tyson: Valentino Rossi.

Let's start by saying that Maverick Vinales, his team-mate, it not his rival, but his best pupil. Despite being faster than he is.

If Maverick wasn't riding the Yamaha, Vale would have beaten Marc Marquez right from the outset - Marquez who today, together with Iwata's recent Top Gun acquisition, is the fastest on track.

Rossi's advantage is that Vinales and Marquez cannot tolerate each other. The Texas Grand Prix demonstrated this. Marc 'had to' win, but Maverick could afford to settle. But instead he wanted to put an end to his rival's record in America. The result was a crash and a zero points score.

Yes, we listened to him: he didn't exactly hide the fact that he blamed the Michelin front tyre. Something that every rider does when they don't understand where they exaggerated. The reality is that he made a mistake. And if Marquez hand't been so keen to show his strength at Austin, Valentino wouldn't be leading the championship today.

And for this reason, Vinales is an ally. It is his team-mate who can push Marquez over the limit, forcing him to make a mistake. Not Valentino.

So what does Rossi need to do this year to fulfill his long-standing dream of a 10th title? Nothing, he just has to be patient. To know how to wait.

If he were a boxer, we'd say that he needs to take advantage of his best swing – consistency – leaving the two young dogs to bark at each other.

Sure, as Marquez pointed out, taunting him, he also needs to win some races to fight for the title. He cannot only play in defence. But this will come. And then, without thinking about any conspiracies, which don't exist, don't you think Yamaha would like to have Valentino leading the championship? His eventual title win would be worth more than a win by Vinales. There are no doubts about this.

We repeat - it's the right year for Valentino Rossi. The faster Maverick Vinales goes, the more Marc Marquez will be forced to raise the bar.

What did Vale say about Vinales when he was ironically asked which pizza he most closely resembles: "the one I eat all the time, sausage and mushroom". He wants to eat him, and knows he is capable of doing so.

OK, Valentino likes to joke, but read between the lines please.

I hear those who say that Maverick and Marc are not the only two on track.

That's true, but give me a name, now that Jorge Lorenzo is struggling to ride the Ducati, of someone who can really be in the mix?

Andrea Iannone? Don't make us laugh. The Maniac, on board the Suzuki, is only showing us just how fast Maverick was last year. he was able to conceal the problems of the GSX-RR. Just as Casey Stoner did with the Ducati.

This is the truth. There is no other. And speaking about unresolved issues, Texas also showed us that the red bikes of Borgo Panigale still have their fair share, after politically lose the winglets war.

The Desmosedici continues to be forced to race with soft tyres, unlike the Yamaha that uses mediums and Honda that goes with the hard solution.

This means it is unable to get the tyres to work well and this explains many things.

Then if its riders, Dovizioso in particular, come out with things like "don't make me say it, it was a disaster", what do you think they're talking about inside the garage?

As we said at the start, we need to interpret the hidden meaning in the words, otherwise we're not reporters and are just all singing from the same hymn sheet.

And if Valentino Rossi doesn't miss the chance to tell us, with regard to his current leadership, that he can now put the malodorous 2015 season end behind him, has he really buried the sporting hatchet, has he forgotten?

Motorcycling isn't classical music, as someone said years ago, it's more like hard rock.