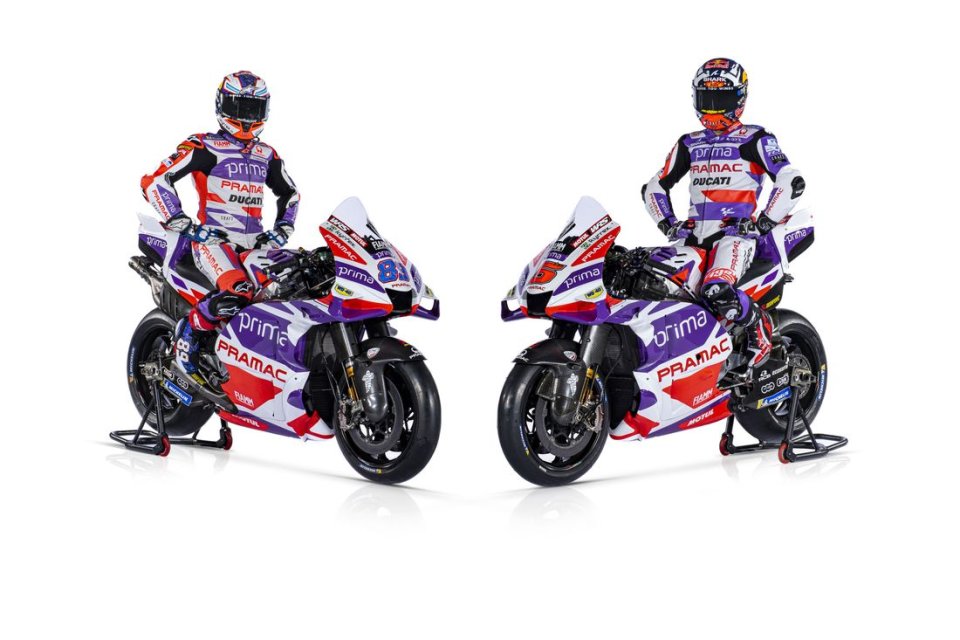 The red of Ducati, the purple of the sponsor Prima and a little more white: this is how the new Ducati of the Pramac team looks for 2023. Today the Italian team officially presented the new graphics on the bikes that Johann Zarco and Jorge Martin will race with.

January 25 was not a date chosen at random, but an anniversary that is very close to the heart of Paolo Campinoti, patron of the team: "Today would have been Angel Nieto's birthday, a person who, together with Agostini, helped me a lot. I hope that making the presentation on his birthday will bode well”.

Pramac is a certainty in MotoGP, a real Junior Team for Ducati that entrusts it with its factory bikes and the most promising young riders.

“It's a tradition for us to bring up riders, many have moved from us to the official team and we are pleased. With Ducati it's like a marriage" continued Campinoti, who then also commented on the presence of the Formula 1 logo on the fairings: "I have a very close relationship with Stefano Domenicale and it is a pleasure to collaborate with him".

While the pairing of riders is now tried and tested, this presentation was the first for Gino Borsoi, the new team manager.

“With two riders like this, the goal is clear - he commented - I had already worked with Martin in Moto3, while Zarco was an opponent of my team in 125, now we can fight together. I'll have to learn to manage both, Jorge has grown a lot in recent years and I have nothing to say about Johann, a double world champion. It will be a great challenge for me and I start with a great desire to work".

Gino then stuck his neck out on the goals he has set for himself.

"Definitely being the best independent team and maybe finishing ahead of the others - he smiled - We'll be the only team, together with the factory team, to have the 2023 Desmosedicis and it's an honour to carry on with development: we'll try new things at Sepang, there it is a programmed evolution. MotoGP has become like Moto3, all the riders and the bikes are going fast, but I think that this year we have something more: a factory bike and two riders capable of making the difference".

MotoGP vs Formula 1 vs SBK: Clash of the Calendars in 2023