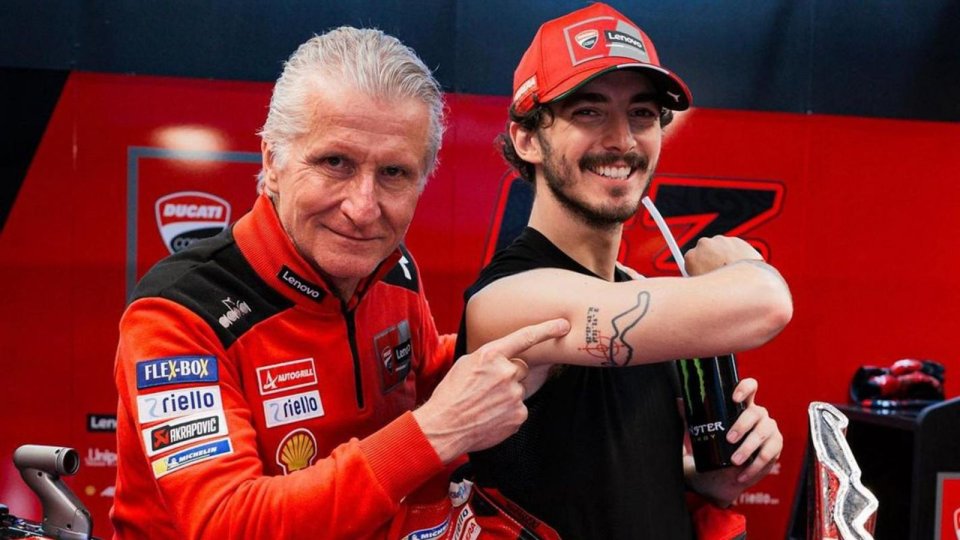 At the Ricardo Tormo circuit in Valencia, Francesco Bagnaia completed his masterpiece. "Pecco" is the new MotoGP world champion, an unprecedented feat that will remain engraved in the history of motorcycle racing. Finding himself 91 points away from Fabio Quartararo in the middle of the season, the #63 never gave up, realizing a sometimes unexpected mission and bringing back a title that had been missing in Borgo Panigale for 15 long years. Sporting director Paolo Ciabatti did not hide his excitement post-race, for a solid and perfect Ducati that scored a full house with the Teams’ title (the second in a row) and the Constructors’ crown (third in a row).

“Just as well it's over - began Ciabatti jokingly - this week has been a crescendo of tension. We knew that Quartararo would need a miracle, but he is a strong rider, he showed it today and historically in races you should never say never. It is important for us to have also managed to win the Riders' championship that has been missing since 2007, even if compared to then it is another MotoGP with many riders and more competitive manufacturers. It means a lot especially for all the people who work daily in Bologna in the racing department. Numbers in hand, Pecco and the bike proved to be a great combination, completing something like 189 laps in the lead over the course of the season. We have the rider of the future in house. Now let's lower our heart rate because we are no longer very young (laughs) and we should try to enjoy this success”.

An all-tricolour rider/motorcycle duo hadn't triumphed in the premier class (the last was Giacomo Agostini on a MV Agusta in 1972) for half a century.

“That’s an impressive period of time. It’s a fundamental success, however, for Pecco, Ducati, the tifosi, enthusiasts and I hope also for the whole of our country”.

Is it the start of a new era?

"I hope so! Now there is a generation of young and very fast riders. Quartararo is outgoing champion, Pecco has just become one, plus many others able to fight for the world championship with really performing bikes. Ducati first of all has one of the most competitive bikes, if not the most competitive on the grid and we hope that the 2023 version represents a further step forward. And in addition the two riders who have scored the most victories this season (Bagnaia and Bastianini, ed.), so next year we will be the strongest team”.

Ducati was considered as the great unfinished business: have you thought about the criticisms that have touched you in the past years?

“We knew we had a fast bike, but it needed to be improved in certain areas. It is not easy because, if there was a recipe to design the perfect bike, everyone would copy it. The hard work of our engineers paid off and we did a great job. Our bike allowed seven out of eight riders to set at least one pole position and virtually each one of them to fight for the podium in the race”.

Pecco as a good team captain did not disappoint expectations.

“A difficult choice, criticized by some, but I can understand it. In 2020 we decided to implement a revolution, focusing on young riders. The results of this championship show that we were right. Perhaps unpleasant from a human aspect point of view because there were friendships and when someone like Jack (Miller, ed.) has to say goodbye, we are always sorry. We must also think about the future and what is best for the company and the team; we are convinced that we made the right choice ”.

What is the memory you will keep of this season?

“There are a lot of good moments. After the Sachsenring GP we were not optimistic at all. But when we won four races in a row with Pecco we realized that, perhaps, we could do it for real. We had nothing to lose and in that instant we worked even harder, thinking race by race, the finish line was not impossible. Making up a 91 points gap… we did something sensational and exceptional. At least I will always remember it because it is my first world title in MotoGP”.

Ciabatti and Bautista impersonate Freddie Mercury with We are the Champions