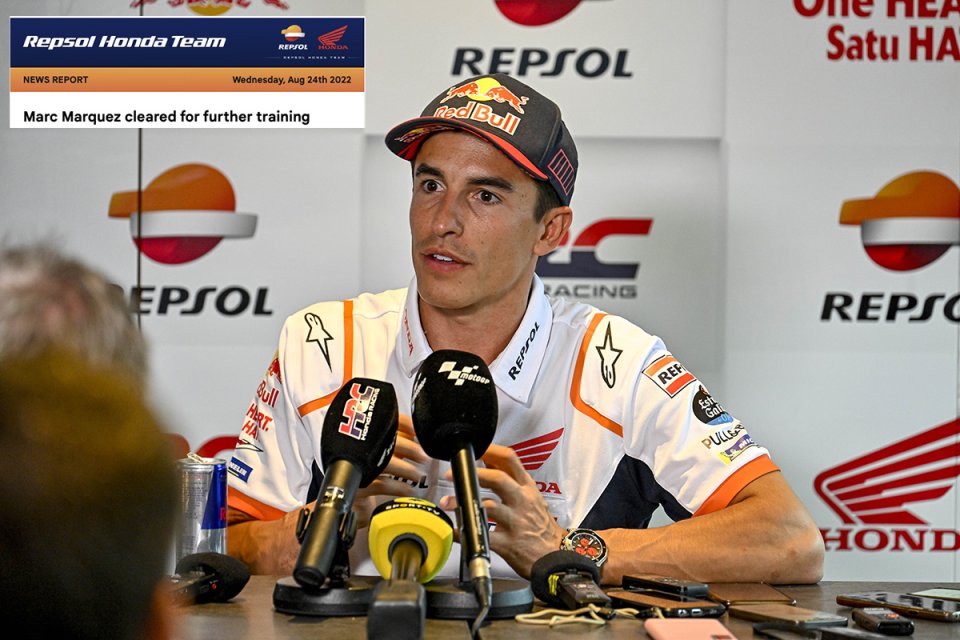 Marc Marquez got the most eagerly awaited okay of the year. After another check-up for his the right arm, he received the approval of his doctors to intensify his training, so the prospect of returning to the track is really close right now. During the press conference held at the Red Bull Ring, Marquez didn’t comment on the possibility of being on the track in Misano during the tests that will follow the Grand Prix weekend. However, he had anticipated that, in the event of a positive assessment by the doctors, the hypothesis would be plausible.

Now that the doctors have given him the thumbs up, he’ll be able to return to training with the same intensity as when he prepared  to race on the track, increasing the loads and regaining the strength he needs to handle a MotoGP on the track. Surely, the first step will be to get back on the bike, maybe on the cross bike or on the Honda CBR 600 RR,which Marquez has often used in training, and then move on to an interim session on the RC 213 V-S, the Honda MotoGP replica that he already used in his first test in Portimao at the beginning of the season.

The following are the words of Dr. Sanchez Sotelo, of the Mayo Clinic, who sound like a real ok to return to give everything in the gym and immediately after on the track.

"Today I had the opportunity to assess Marc Marquez in relation to the surgery that was recently performed at the Mayo Clinic. Fortunately, Marc Marquez has regained a great range of motion and has also recovered well when it comes to muscle. He underwent X-rays and a CT scan today that show how the bone has completely healed."