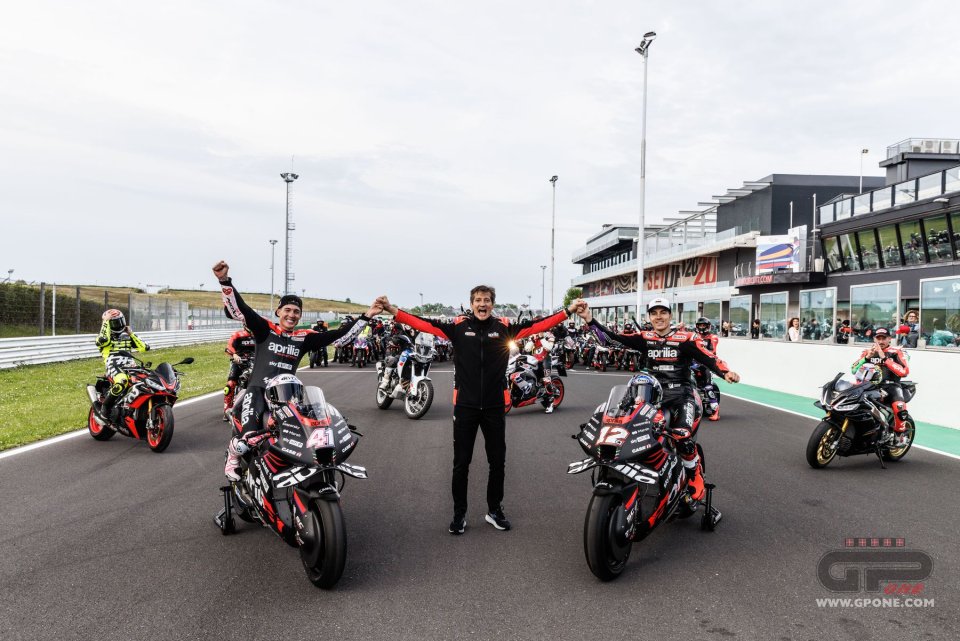 Massimo Rivola is undoubtedly experiencing a very intense period of his career in the role of CEO of Aprilia Racing. After the initial difficulties, Rivola has seen the Aprilia adventure grow unstoppably in MotoGP until a 2022 season that is going well beyond the rosiest expectations. Aleix Espargarò has won in Argentina, has been on the podium many times and is in the middle of the battle for the title when most of the GPs have already been raced and in the other half of the garage also Vinales is starting to interpret the RS-GP, a bike he has always talked about very well since the first test at Misano, perfectly.

But now that Aprilia has a stable place among the MotoGP greats, they also need a sponsor worthy of its performance, a partner on par with what Lenovo represents for Ducati or Red Bull for KTM. In an interview with our Speedweek colleagues, it is precisely Red Bull that Rivola seems to aspire to, aware of being able to offer the brand important results on the track.

“Yes, we do not have a main sponsor – explained Rivola - I must give you the following answer. I can report: top sponsors are waking up and looking at us. That's a good sign. I really hope we find one. If we want to remain competitive, we need the right budget. When we talk about this topic, we should also mention that a budget cap has been decided in Formula 1.”

In Formula 1 the spending cap has been set at 140 million euros, even if there are many items that go beyond this limit and in any case, many manufacturers manage to circumvent the rule without breaking it.

“The FIA ​​has the necessary structures with competent officials who control the costs of the teams in a professional way. There may still be loopholes, but Formula 1 teams' operating costs are falling. Nevertheless, we have to discuss in MotoGP whether this "budget cap" system could also be an option for us. Then we can talk about banning all these super devices and systems that just drive up costs. We also have to talk about new aerodynamic restrictions. Aprilia is very strong in this area. But for the good of the championship and our core business, i.e. series production, we should keep costs down.”

At the centre of his criticism is obviously Ducati, which has raised the bar in MotoGP with its innovations.

“Yes, the Audi Group obviously has a little more leeway than we do. But in the end, if we put on a good show, this sport can survive. At the moment nobody can complain about the quality of the show. Therefore, we must strive to keep the performance level of everyone involved at a similar level. If one manufacturer can invest a lot more than another, and I'm not just talking about Ducati, maybe another team can invest a lot more, then it becomes a bit unfair. Equal or similar conditions should prevail for the designers. They don't have to be identical, but similar. The satellite teams then contribute with powerful bikes to make the spectacle more attractive, to make the starting grid bigger and to develop young riders. As we look ahead to our future, we should give serious thought to containing the costs.

When Rivola is then asked who is the top sponsor they are aiming at, the answer takes the direction of Austria.

“Yes, we are in talks. It would also be worth considering whether the Red Bull Group supports a second top team, as in Formula 1. Aprilia could become the Alpha Tauri team of MotoGP for Mr. Mateschitz.”