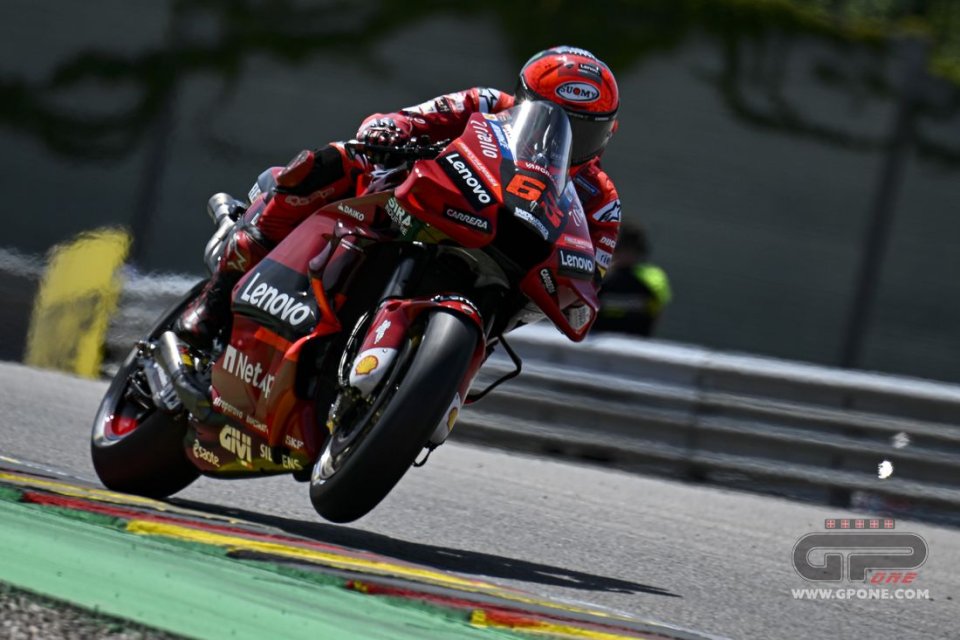 Fastest time and track record at Sachsenring, the bogey track for the Rosse. It is clear that Pecco Bagnaia is happy this Friday, also because Ducati made the big difference, putting 5 bikes in the first 6 places, with Quartararo 7th. It is still early to declare victory, but in the meantime we can look to the future positively.

"I'm very happy because I haven’t been so incisive on Friday for a long time, there was always a lot of work to do, while today was my best first day in a long time - Bagnaia said - I managed to get on the track and felt good, we haven't touched absolutely anything from the setting, apart from a very small modification to the rear, and I don't want to touch anything. Everything is fine, I have tried the various tires and for the moment I feel good. Here at the Sachsenring it was an almost unexpected start, but I knew that with the potential seen last year in the race I would be able to get off to a good start. "

What does it mean to be so fast right away on a track that hasn't been friendly to Ducati in the past?

"I was reflecting first on the enormous work that Miller and I have done in the factory team, it has allowed us to change the method a bit. Trying to go in another direction allowed us to be fast even on tracks where a lot of driveability is needed. The new fairing was the last step and today many Ducatis are in front, despite the fact that we have lost a bit of top speed. There are all the credentials to be able to do well, I wear the tires little and I feel good on tracks where you need to have a lot of cornering speed, these are all things that allow me to be competitive ".

Whoever replaces Miller will have to adapt to this method?

“I think the customer teams are already working in this direction. The work I do with Jack is also important for the development of our bike and has brought a lot of progress. I hope whoever comes next year realises this right away instead of waging an internal war that is pointless. We fight our battles in the race on Sunday”.

Considering that there are so many fast Ducatis, could this be the right time to take points away from Quartararo?

“First of all I'll have to get in front of him and it won't be easy. The way the weekend has started, we are in pretty good shape, we will have to see if we can take another step forward or if the others will come closer. It seems that in the next few days it will be much warmer, but usually it is not a problem for us ”.

After this day, who are the main opponents?

“I would say Quartararo and Espargarò, even if Aleix’s pace goes up a lot after a few laps while Fabio struggles more with the new tire but then remains consistent. Marini and Vinales also went well, they seem the fastest to me ”.

The video was issued where Nakagami apologized to you, you seemed very calm.

“We are intelligent people and we don't have to dwell on the past. I've been transparent, that's how I am and getting angry would only lead to more nervousness. I'm not that kind of person ”.