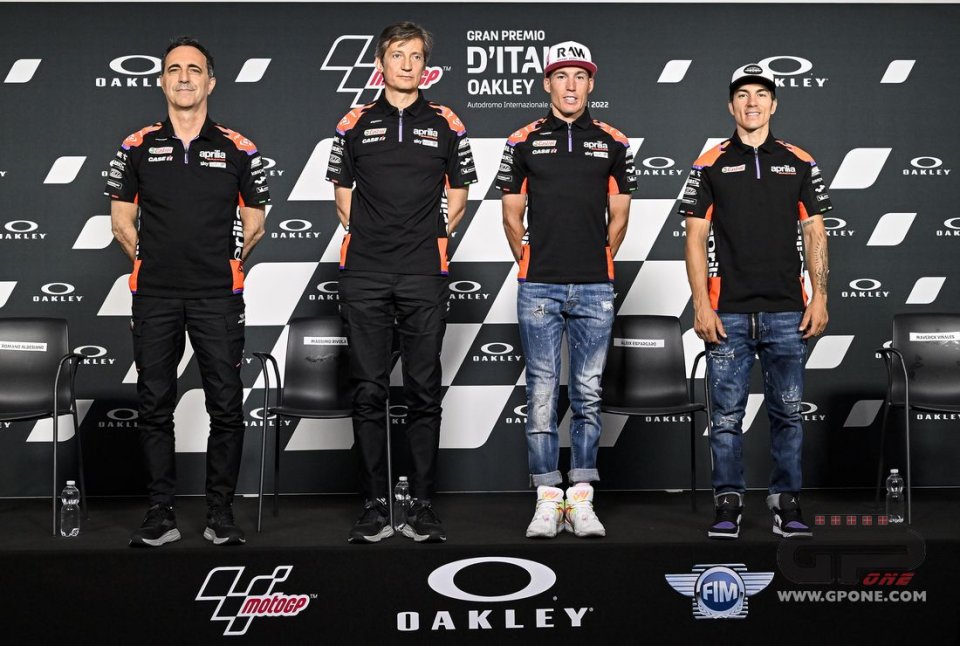 Aprilia decided to start the home Grand Prix at Mugello by announcing the contract renewal with Aleix Espargarò and Maverick Vinales. The two Spanish riders will race on the RS-GP for another two years: "I've never considered other options, stability means performance, and we're not just talking about two riders but two guys with whom we have built a family" team boss Massimo Rivola said with a touch of pride.

Aprilia at the beginning of the season has established itself as one of the protagonists of MotoGP and did not want to shuffle the cards.

“Stability is important - Romano Albesiano confirmed Rivola's words - Changing riders would have been a difficult challenge. I am proud to continue with Aleix and I am sure that Maverick will be able to reach his level. I have a very open relationship with both of them, they are an integral part of the technical development ".

Rivola calls Espargarò 'captain' and his loyalty to the shirt has never been in question.

“Of course I had other options, but I've never really looked for them. I've always said my dream was to continue with Aprilia. It took us a long time to get to this level, longer than I expected, and now, with the contract signed, I feel calmer and can focus on the goal we have ahead. I know it's very big, but I believe in it ”.

Despite somewhat ‘spicy’ declarations by the Spaniard ("If Aprilia weren’t to reconfirm me, it would be the biggest bullshit in history"), the marriage was never in question. "Aleix always goes full throttle, we like him for that too, but I know that his blood is black" smiled Rivola. "He is the one who has believed most of all in this project, sometimes he pushed very hard, but he was right" echoed Albesiano.

Vinales, on the other hand, is, for the moment, a still on-going gamble, but he himself is the first to believe in it.

"I am happy to be able to continue with my progress, we are working to get on the podium and win - said Maverick - When they gave me this news I felt very proud, it gives me even more motivation".

Now that the team is in place until 2024, Aprilia can think about doubling up. Negotiations with Razali's team exist and we will soon find out if they will go through.

"Very soon we will say if it will be a yes or a no - said Rivola - The deadline we have set ourselves is close, I would like to have a second team, Aleix is also pushing a lot for this, but it is not something we have to do at all costs. It is an opportunity for growth and if we decide to exploit it we will have to do things right ".

Espargarò is holding out for one.

"I'd like one, even if I can't explain why - he admitted - On the one hand it would be an opportunity for growth and on the other I feel like the father of this bike, seeing two more on the track would be a dream".

Aprilia's revenge: from the innovative RS "Cube" to the RS-GP...