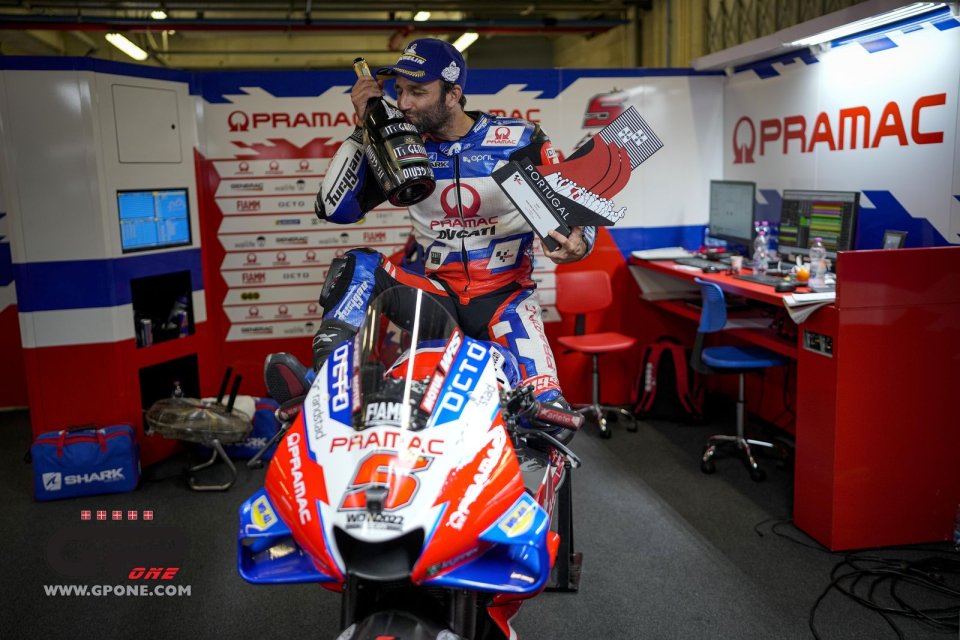 French rider Johann Zarco, who had scored the best time yesterday, also conquering the pole, reached the second step of the podium on the Portuguese circuit, behind an unstoppable Quartararo who imposed his race pace right from the very first laps today. It wasn’t an easy podium, and he was indirectly helped by Miller’s risky pass, which caused one of the great favorites of the day, Spanish rider Joan Mir, to exit the game. Now the Pramac team’s rider is fifth in the standings with 51 points, 10 points behind the previous leader of the World Championship, Bastianini. Proof of how the ranking in this championship is constantly changing.

"It wasn’t an easy race, even starting from the front row,” the French rider stated. “I tried to keep up with Fabio, but it wasn’t enough. I made one last attempt on the last lap,  but I’m still satisfied with these twenty points."

The widespread opinion is that the European circuits will more clearly consolidate the level of the motorcycles and riders in this championship. And, yet, you’ve had difficult conditions here in Portimão that have led to an equally particular race. What are your expectations for the Jerez race?
"On the one hand, it’s true that we’ll probably start to see who’ll be the most consistent riders in terms of results in the European races, but, on the other hand, I think this is a very unique championship, very competitive, in which everyone has the chance to do well, and even the bikes are all at a very high technical level this year. I didn't think I could get a good result here in these conditions, but here I am, so I think that we’ll continue to see this level of competitiveness in the next races. Today, Fabio was able to demonstrate the qualities of the rider we had already seen last year. The ability to impose himself and keep his pace constant, he had it more than everyone in the race. As for me, last year we achieved a good result here in Portimão. A victory that we were able to replicate this year, but I also believe that, race after race, cross-referencing the data between the various Ducatis, being eighth on the track, we’ll begin to see more Ducatis on the podium."

This is the second time this year that two French riders have ended up together on the podium. Last time it was in Qatar. What do you think?
”I think it's nice to share the podium with a friend as well as a rival and, in any case, a second place is a great result. However, you have to admit that it’s more thanks to Fabio than me. Usually, he’s the one to be praised by the French media, and I’m his teammate,” Johann said jokingly. “But it’s still something to be proud of for our nation, without a doubt! Like I also said last year, there’s ten years between us, and seeing a French rider win, even if it's not me, taking a step back and looking at it in perspective, is a very good sign for France. At the bottom of the grid, it's just the two of us, faced with a bunch of Spanish and Italian riders. So, when we get a result like this, we have to be even happier. Fabio took an incredible step forward today, so even when I don't get the same result, if he does, I can't help but feel partially satisfied myself."

You often mention how the data analysis of the other Ducatis is improving you as a rider. How do you feel you’ve improved this year?
”Right now, I'm trying to improve braking a lot, the strong point of Bagnaia’s Ducati last year, and I feel like I'm improving. Analyzing the data, it seems a margin of improvement of little importance, but if you multiply it by fifteen corners for each lap, it becomes a margin of improvement that shouldn’t be underestimated," the French rider concluded.

The Scottish rider is currently involved in the British SBK championship, in the past he has raced in the Rookies and Talent Cups and will make his...
1 week 15 min ago

The Soft tyre in the front provides riders with a very good feeling and also a strong grip on maximum angle. The Medium front tyre could also be a...
1 week 15 hours ago

At the exit of Turn 5, Miller was observed to be riding slow on line, disturbing rider #12 and causing a safety concern. Same punishment for Baltus...
1 week 16 hours ago