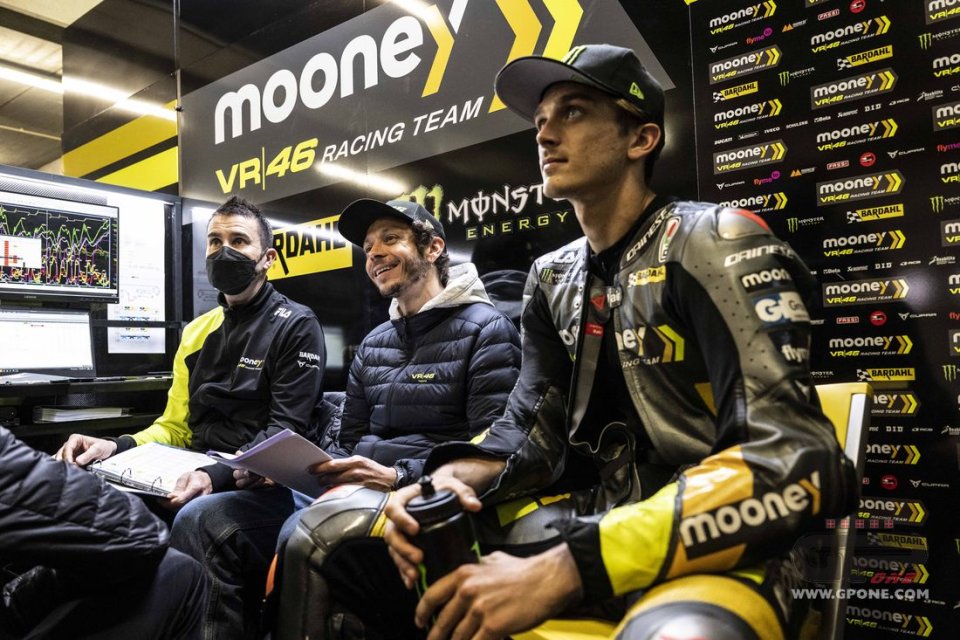 Luca Marini had a special assistant today in Portimão. His brother, Valentino Rossi, arrived at the Portuguese circuit and coached him and Marco Bezzecchi. He not only spent a lot of time in the garage, but also on the track, giving instructions to his riders. The result is that Luca will start tomorrow from 8th place for the race.

“Vale helped me a lot. Not only does he have a great passion for racing, but he also has an eye that no one else has. Not only did he race in the MotoGP until last year, but he did it his whole life. Going also quite fast,” Marini said jokingly. “He really sees lots of  things."

What advice did he give you?
”He told me everything, how my bike behaves and, like the others, which gears are used by the various riders at different points on the track. Practically, watching at us, he understands exactly what we feel when we’re riding."

Today wasn’t easy for you. You were in Q1.
"I'm happy about that session. Mounting the slicks right away was the right decision, even if they were cold in the first laps, and I had to wait before pushing."

Didn't you have any doubts about taking that risk?
"The fact is that, with the medium wet tire, I would’ve only been able do two laps and would’ve only wasted time, not to mention that I was really slow with the tire in the FP4. It was then better to change to the slicks, since I had lots of time to bring them to temperature. Also, the track improved, lap after lap, because it’s incredible how much the MotoGPs dry up the asphalt."

How is it using dry tires on wet surfaces?
"It's hard at first, because you have to push to get them to temperature, but you don't have grip. When entering corners, the rear slips, while instead you have to make it slip on purpose in acceleration so that it heats up."

Was the situation better in Q2?
"Yes, it was easier. I had a good time, even though I expected something better. Now all we have to do is analyze the data we have for dry conditions and work for tomorrow. The warm-up will be the key for everyone."

What are the variables and what are the certainties?
"I think the choice of tire will be the same for everyone, medium on the rear and front. The important thing will be to fix the electronics. It’s not easy at all in twenty minutes. I’ll finally have to work on braking and entering corners. There’s still something missing."

Will you finally be able to be constant?
"I'm glad I won’t be missing that little something that influenced the first races anymore. During the winter tests, we were always a little late, and it’s difficult to make up for lost time in a race weekend, because you have to think about getting into Q2 at every round. In this sense, the tests after the Jerez GP will be very useful."

Marini: "The GP21 would have helped me, but that's not all that makes...