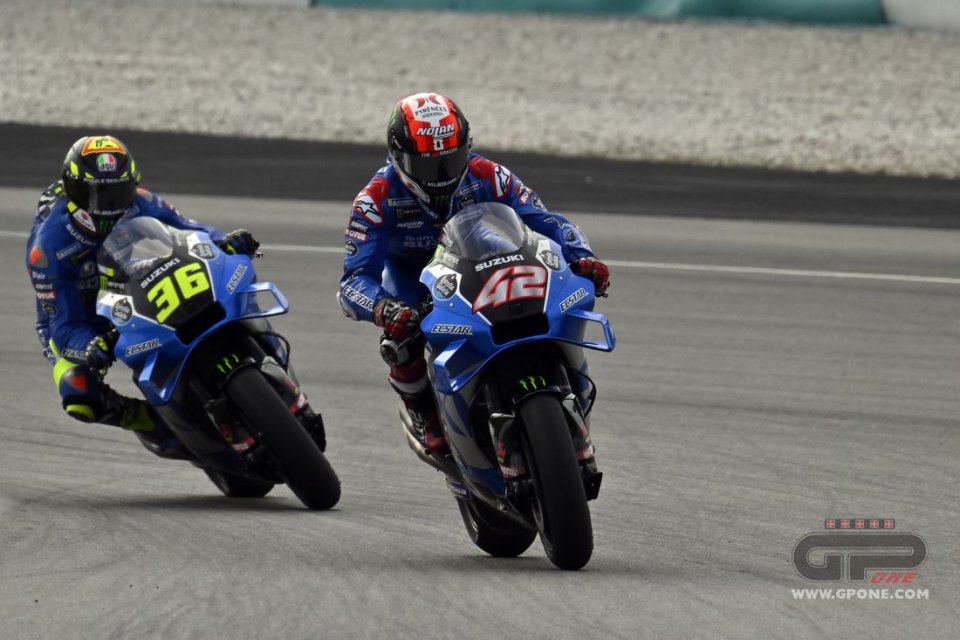 The Sepang tests are an anticipation of the season to come. While it's true that a test is still mainly an opportunity to fine-tune the bike, it also offers a fairly true taste of what the season could offer. The stopwatch leaves no room for doubt, Suzuki is there and is not intimidated either by the eight Ducatis or by the new generation. Alex Rins and Joan Mir showed that they have not lost ground to their rivals, scoring an excellent third and seventh position, behind Aprilia which dominated the tests today.

"It was a good day - said Rins - I was able to have a good pace right from the start, keeping consistent, which is a positive thing considering that I was trying different things. Overall I'm satisfied. As for the engine, from the data it certainly has more power, while with the aerodynamics there are still some details to be perfected, the two new wings did not work as they should have ".

What is the goal of these tests exactly?

"We are trying to gain something out of the corners. In the first section of the track, in the slow corners, the others manage to keep the front wheel more attached to the ground and we have some difficulties. We have to work on this."

Overall, what is your opinion about this new bike?

"It's a good bike. The engine has definitely improved, we tested a new chassis with some carbon parts, but we have to test it again to get more data. We have several new elements to work on, the conditions are very good."

You also had a crash…

"Luckily, nothing serious, it was my mistake due to the track conditions, the bike has nothing to do with it."

How difficult is it to make comparisons at these levels after a two-month break?

"The important thing is to try to keep the same level, but we riders live on bikes so we're used to it."

Joan Mir: "The Suzuki has improved, but it's better not to claim victory"

His teammate, Joan Mir, also said he was satisfied with the performance of the new Suzuki, even though he remains cautious about making predictions, aware of what his rivals are capable of.

"The most important thing first of all is to get the right feeling again with the bike - the Spaniard told us - In our case we tried several new elements, both the fairing and the chassis. The difficulty lies in finding the right balance between all the elements. During the first tests, sorting out the electronics is more difficult, it takes more time and it is something we will have to work on, but I can say I am satisfied ".

What about braking and acceleration instead?

"One chassis is more stable under braking but then in cornering it is not optimal, and one is the opposite, we will have to study the data to choose the best solution, but for today the lap times were not bad, I think we still have a good margin of improvement".

So can we say that the big step forward was given by the new engine?

"Yes, the engine has certainly shown its potential, even if personally at this moment I’m not looking too much at the positions, it’s better not to claim victory too soon. The improvement has been made without upsetting the character of the bike."

Do you think this engine can make things easier for you than last season? Will it be competitive enough?

"It's hard to say, I think when we have all the pieces in order, we will have a clearer picture of the situation but starting the season with the system that lowers the rear will already be a step forward from last year."

Is that what you expected, or did you want something more?

"It's only the first day, the overall feeling is good, I'm satisfied".

Have you already had the opportunity to face some of your opponents on the track?

"Not many, I spent a lot of time alone. To be completely honest, in this heat it is preferable not to stay behind anyone! (Laughs)"

You did a lot of laps today, despite the temperatures.

"Yes, I didn't count them but I think I did about sixty laps, to get as much data as possible. It's important because we have little time, only two days and a lot of things to try, so if the track is in good condition, it's right to give something more ".

Instead physically in what condition are you?

"I trained a lot during the winter break, in a way these tests are an exam for all of us riders, I am still here so I would say I am in good shape (laughs)".

Watanabe: "Formula 1 is helping us to improve the aerodynamics of the...