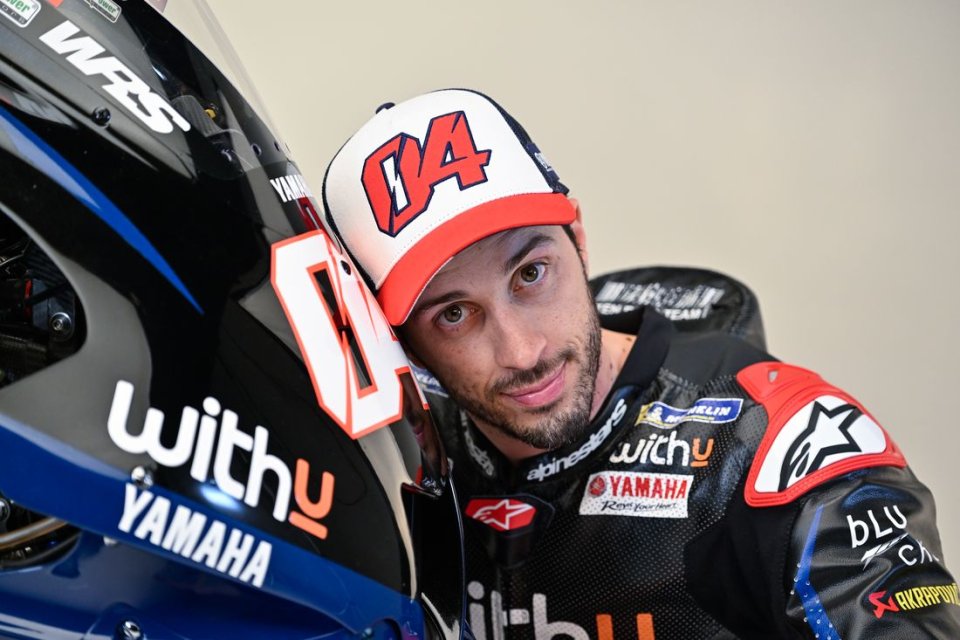 The new adventure has begun, the Yamaha branded WithU is ready for him and in 2022 Andrea Dovizioso will celebrate his 20th season in the world championship. The man from Forlì has accepted this new bet and he will have to do everything possible to win it, knowing that it will not be easy. After all, he will take over from Valentino, not only as the oldest MotoGP rider, but also on the M1, in the same team. The important thing is not to repeat his results.

"I can say that the goal is to go faster than he did - Dovi smiles - When you are behind, it was Valentino himself who declared it, you don't enjoy, you don't want to continue racing and I don't want to find myself in that situation. In MotoGP you only enjoy when you are in front, it is not good at the back ”.

So you haven't regretted your choice to return?

“That I will only be able to say at the end of the year, it is not good to think negatively even before the tests. In life you have to do what you feel, regardless of how it goes ".

"I don't seek the approval of the others, I do what I want"

After twenty years of career do you feel you have something to prove?

“If you want to do something and you have the chance, then you have to do it. Too many times we make the mistake of seeking the approval of others, trying to obtain certain results in a certain way, showing what the others want, from my point of view it is wrong. It means following the crowd, at least that's how I think of it. Thinking in that way, you only think about the image when things are going well and then you stay at home to comment with your head held high on what others are doing, but for me it is neither a mature nor an intelligent attitude. I was lucky enough to have this opportunity and it's nice to take advantage of it, everyone then makes their own considerations, but I don't care up to a certain point ".

You must have given yourself a goal ...

“It is to get the best out of the bike. I can't know now how competitive the Yamaha will be, in the tests we will understand something but not everything. Basically I want to have fun and this only happens when you manage to squeeze the bike, the results will then come. When you are in front, you can push, then you can say certain thinks. Saying now that we will break everyone's ass is pointless ".

“If I have accepted this challenge it is because I want to try. I always want to improve, I work a lot on myself. The best thing is working with professionals, waking up every morning with the thought of perfecting yourself. Of course, if the results don't arrive, it's not nice ”.

"I live this season as if it were my last, the results will decide"

Are you already thinking about 2023?

“I have no plans, that's the truth. I live this season as if it were my last because I don't know what will happen. Everything is always related about the results. So if the results will be very good, it's not a problem! If the results are not that good, it is what it is. I'm completely relaxed in this situation. I don’t have contract for next year but I don’t want a contract in this moment for next year because I don’t know in this moment what I would like to do. But for sure everything is related about the results because if you are fast, you enjoy. If you are not fast, you don’t enjoy. Especially in my moment of career."

You feel under scrutiny despite your age?

“The level is high, fighting for the championship won't be easy but I'm here to do it. I definitely can't say it's going to be an apprenticeship year (laughs). Having twenty years of experience brings with it more positive than negative aspects, you don't waste time and you don't waste energy. There are other problems, but you have to know how to manage them ”.

You need to get to know the Yamaha better and make peace with the tyres, where are you at?

"The new rear tyre casing that arrived in 2020 changed the way you have to brake especially - also with the Yamaha. I still think I can use that balance in a better way. Still I don’t feel comfortable when I'm braking, I don’t feel that I'm using the full potential of the tyres and the bike. I was improving a lot in the last two races of last season, but I changed completely in the way I was braking, compared to Ducati, because the Yamaha requests different things. And that also helped me to adapt to the new casing from 2020. The way you have to ride the Yamaha at the moment is not natural for me."

"Like Lorenzo, I need to understand how much I need to change my riding style"

Do you feel a bit like Lorenzo when he joined Ducati?

“You have to do like him, especially when you get on a bike with opposite characteristics to the one you rode before. Jorge started to be competitive when, in my opinion, he changed his approach and didn't try to ride like at Yamaha, but still took something of his riding style. That's why I think it's very important to adapt because with the MotoGP of today - tyres, brakes, electronics, chassis – it's quite clear what you have to do on every bike.”

You were only out of MotoGP for a few months, did it surprise you when you came back?

"In MotoGP there is always change, because there is a big development of riders, bikes, everything. So I'm not surprised to be surprised! But the biggest change was more in 2020. 2020 was a strange season for many reasons but I believe the biggest reason was the new casing of the rear tyre."

"Stoner is right, aerodynamics affect racing in a negative way"

“Because many things changed without the regulation being changed. I think my generation has come to an end, the new tyres require a completely different way of riding and for those who have been racing for many years it is more difficult to adapt, less natural. Then the young guys who are there now are particularly strong and talented, moreover there are no longer satellite bikes, so it is a combination of factors. Finally, there is an aspect that is rarely talked about ".

"Aerodynamics, I talked about it with Stoner when he came to a few races last year and I agree with him. In my opinion, aerodynamics are affecting the races in a negative way when it comes to battles, there are problems in overtaking, there are no fights. They are all close because the aerodynamics mean you don’t make a mistake, you just need to have one or two tenths of an advantage to keep it until the end ".

"I don't have one name, every season makes its own story, but there are four riders who have half a point more than the others: Bagnaia, Marquez, even if we don't know his physical condition, Quartararo and Martin".

"Petrucci surprised me, he thought he was a black sheep and he did something special"

Did seeing Petrucci at the Dakar make you want to do it?

“I'm pretty crazy, but not like him! (laughs) I know him a little and I knew how strong he was off-road, also because he beat me easily (laughs). But he surprised me, I wasn't expecting certain results, he did something crazy. I think Danilo felt like a black sheep and doing something special the emotion must have been very strong. I'm happy for him and I wrote to him, he deserved what he did ".