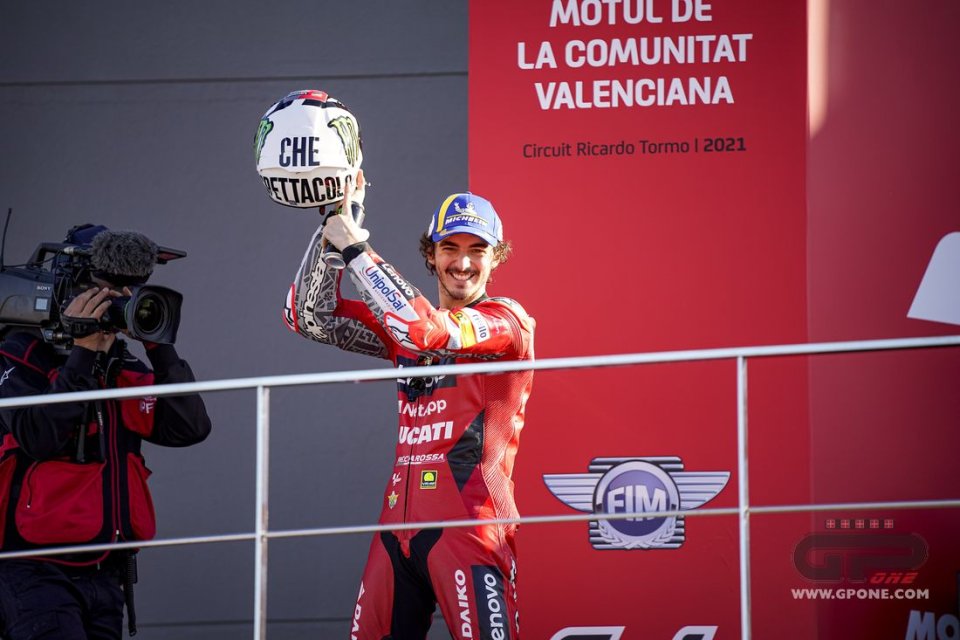 Bagnaia won the last GP of the year at Valencia wearing a special helmet, the one Valentino used to celebrate his ninth and last world title. 'What a spectacle!" is written on it and Pecco lived up to those words. For him it was the fourth success in the last 6 races, celebrated on an all-Ducati podium for the first time in history. It almost seems like a passing of the baton, from the Doctor to his pupil.

“The most important thing was to celebrate him in the best way possible – explained the Italian - So, for me was the nicest one for the story this helmet had. And it was nice the hug we had on track after the chequered flag. We shared a lot of emotions there, so I’m very happy.”

What did it mean for you to wear that helmet?

“When we started organizing this surprise for Vale, I started thinking about his story. At first, I wanted to use his helmet from last year, but then I thought of him at his last title, which he had won in a difficult season, in which the Honda was very strong and I chose that. For me the graphics are the nicest ".

What does Valentino leave you?

"For me he is a friend, an older brother, he has helped me a lot with what he has done, and he is still doing, for me. Celebrating him like this was the minimum, yesterday I tried to help him in qualifying and today I took his helmet to the top step of the podium with me ”.

What sort of race was it?

“I got a bad start, just like in Portimao, it's something I have to work on. In the first corner I was 4th, then I passed Miller when he made a small mistake in turn 2. I got behind Martin, but when I saw Mir coming closer, I decided to overtake him. I am very happy, winning here, on a track where I had always struggled, means a lot to me ”.

How important is ending the season like this for next season?

“I hope to start 2022 with different expectations than 2021 (laughs). I will definitely have more confidence because now I know I can win. Furthermore, the Ducati has now changed, it didn't turn before and now it does, we have managed to change it by working hard, using a different mentality. Not only is the Desmosedici competitive, but also all the riders who ride it, we are a great team ”.

You're at Jerez for testing on Thursday, what bike do you expect to find?

“I just hope better. For me this one is already perfect, even if it is virtually the same one as 2020, we have managed to make it progress a lot. I don't think the 2022 bike will change much, but I also know that if Gigi Dall’Igna decides to change something it's because he knows he can improve it".

“He did a good job, indeed a more than good job. In his first season he managed to start from pole in Qatar and win in Austria after a long stop due to an injury. He must be happy, even today he was very competitive. The Ducati is not the easiest bike to make his MotoGP debut on, but he learned quickly, it took me longer. I must say that Bastianini was also very good and Marini worked a lot this year ".

Today was Petrucci's last race, he said he was the last normal rider to win in MotoGP, now you are all phenomena…

“All the riders on the grid have great talent, including Danilo. The thing that has changed in recent years is everyone's preparation and mentality, there is greater professionalism and the level is very high ".

After the two days of testing in Jerez, what are your plans for the winter?

“On November 23rd I will have an operation where they will remove the plate from my leg. With the rehabilitation I will have it for a month, then I will go on vacation to New York with my girlfriend, I need it ”.