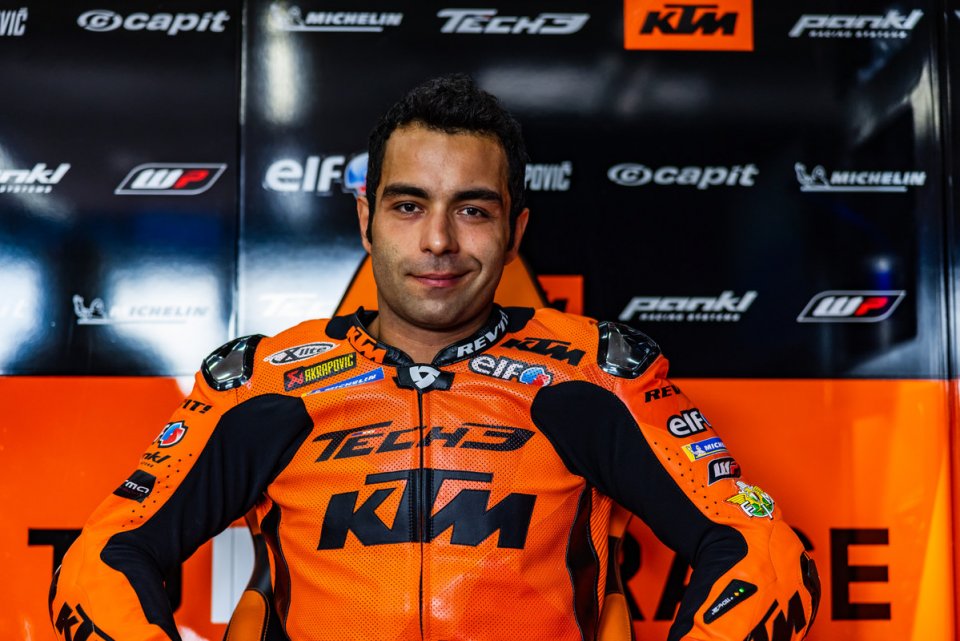 One eye on Misano, and one on the dunes of the Dakar. This must be what is going through the mind of Danilo Petrucci, who is preparing to tackle the last races of the season in MotoGP and then literally jump on the KTMs born to win in the desert classic. It’s a truly demanding challenge on paper, marking a huge change for Danilo.

But before tackling the Dakar there are races to be disputed on the track and Petrucci will have to try and reverse the course and get back to fighting at least in the top ten permanently. He needs to end a long adventure in MotoGP that deserves the best possible end. Danilo is aware of this and is determined to go out of the top class in style, before moving on helmets with visors and motorcycles with knobby wheels. Meanwhile, a thought also goes out to Tony Cairoli, a motocross legend who has decided to quit at the end of the year. Petrucci might attract a large number of fans with his figure and help them discover the world of off road as has never been done before. A challenge that intrigues him.

But at Misano there will also be the return of Dovizioso with Yamaha, which is the Japanese manufacturer’s response to Vinales' debut with Aprilia. Petrucci was asked who he would bet a euro on.

"A euro on Vinales or Dovizioso on Sunday? That’s a really good question. Now I would put it on Maverick because he has already lapped at Misano and has the experience of one race on the Aprilia. These extra kilometres in the saddle make all the difference" .

Going back to your future and the Dakar, what do you think of Cairoli's legacy? Somehow you are involved in it.

"This challenge stimulates me a lot also for this reason - confirmed Danilo - first of all I have to congratulate Tony Cairoli for his career and for what he has done. I wish him the best, really. I would like to give visibility to the world of off-road with my figure. On a sporting level there has never been anyone who in less than two months has done a MotoGP race and then the Dakar. The plan is to try to do it immediately as an experience and then decide from there on with KTM what to do. They are offering me to do a Dakar with all the commitment that it entails and it is no small matter, without ever having got on that bike. Then we’ll see what comes out of it and what we could do together ".

But for you, is racing in MotoGP until the end of the season fun, knowing that your future is elsewhere?

"It is different for me to come here after a long time and with all the experience I have. Really having fun with these bikes is not easy, because it is not about fun in the saddle, but rather about commitment and application. You can’t arrive on track and say OK, these are the last races, I think I’ll have fun' because after you pick up two seconds per lap and there is nothing funny about that. You have fun when at the end of the race you went very fast and you can tell yourself that I just did my best. Otherwise it is impossible. I want to finish this season in the best possible way, time is running out and there are few races left. I have to give my all, trying to stay up at the front and maybe take an opportunity if it comes. I want to finish in the best possible way and maybe get on the podium for one last time ".

Dovizioso is also back at Misano. What do you think he can do?

"I'm happy to see Andrea back on a MotoGP bike. How he can go, I think it's hard to imagine. Tomorrow I think it will be complex, because knowing everything there is to learn about a MotoGP bike, I find it difficult that just a few sessions, which are even short, will be enough for him. They are 45 minutes, but actually you ride at Misano for 11 or 12 complete laps each session. It is difficult to do everything well and then I know Andrea a little and even in finding the right position on the saddle he is very meticulous and precise. He will have to overcome a few steps before being competitive. But then I also think that although it is not the same bike, in 2012 he went fast with a private M1. It will be tough, but he is a very intelligent rider and he will do well, maybe not immediately this Sunday, but he will learn soon and will be at the top ".

Your mum is also back here at Misano, right?

"Yes, Mom's here too. For two years we couldn't bring anyone, but this time she's here and she's more excited than me."

What are your goals for Misano?

"In the last few races we have found a good base set-up for me on the bike and I feel good in the saddle. Every time I know I can be fast, but every time we have to see how much my gap will be on the straight in acceleration and top speed. Last year the RC16 was strong here at Misano, so I would like to at least try to score points and stay as close as possible to the other KTM riders. Aragon was difficult for me, because the only point where I can make up is braking but I always found someone in front who slowed me down. I was losing time and it was difficult. I also made a couple of mistakes, I had Miguel in front of me and I stayed with him. Maybe it wasn't his best race, but it's important for me to stay with the other KTMs. "

This isn't exactly your favourite track, but the rain might help you…

"Yes, Misano has never been one of my favourite tracks. It’s a love-hate relationship. Here I have always been strong in the rain, while in the dry I have never done much. Obviously for me it is the first time with the KTM, I don't know what to expect. I'm worried about acceleration, but I feel better on the bike for a few races now and I want to try to make the most of this to enjoy these races until the end of the year. I don't have the pace to win, but I'd like to be in the top ten. Maybe in October here, with a bit of cool weather, I'll be able to do something more ".