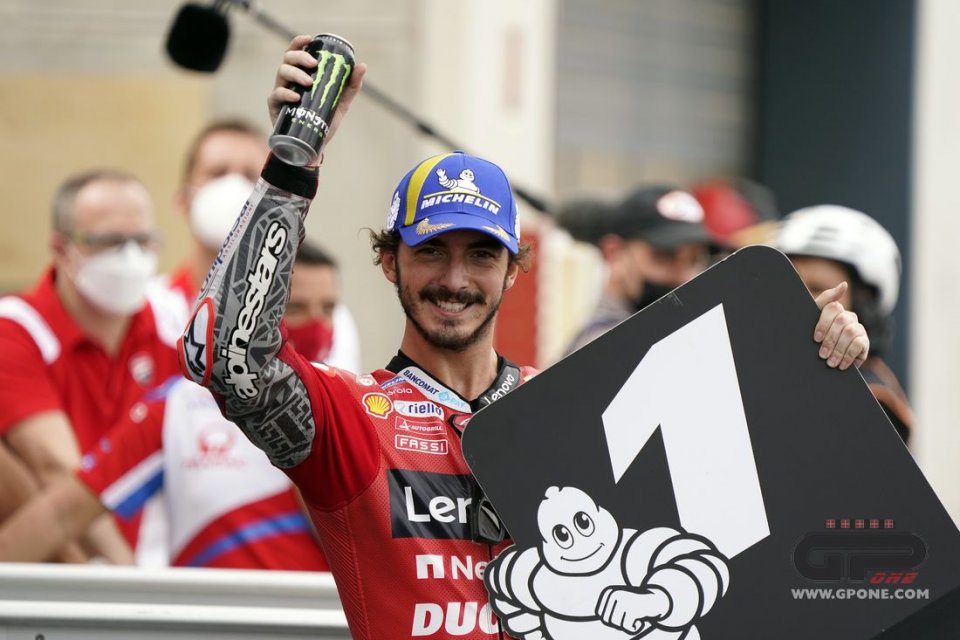 Bagnaia’s pole at Aragon is not like any other for the Italian as the Spanish track had never been particularly kind with him in the past yet in qualifying he shattered Marquez's record that had stood for 6 years and with Miller he gave Ducati a 1-2 on the grid. It’s difficult to present yourself any better for the start of tomorrow's race.

"I think it was a perfect lap - admitted Pecco - It was great, already in the first sector compared to my best lap time of 1m46.9s, was already four tenths up. So, I did a nice sector one, the sector two was incredible too and our bike in sector four helped us a lot. Also, entry to the last corner was incredible because, just looking at the data of Jorge Martin this morning, who was doing a different line compared to me, and then I tried to do the same and I improved a lot. I didn't expect to do a lap like that”.

There have not been two Ducatis ahead of everyone at Aragon since 2018, when Lorenzo and Dovizioso were 1-2.

“Arriving here I had a lot of questions on how to be fast at this track because I struggled a lot in all the years past apart from 2018, when I was fighting for the Moto2 title. And when I started in FP1, it was already another story. My feeling was improved a lot compared to last year and from Silverstone I didn’t touch anything on the setting, so my bike is the same. It's a great day for Ducati: there are 5 in the top 10 ”.

Are you touching wood for tomorrow's race?

“I just hope to have a normal situation, because at Silverstone we had a big problem with the rear tyre and it’s something that can happen. And I think this time it’s not my turn, so I hope everything will be clear and the same of the weekend.”

Valentino said the right time has come for you to win ...

“I don't know (laughs). Tomorrow I'll just try to set my pace and be fast. It will be important what happens with the tyres after 15 or 16 laps and in the last part of the race I feel strong, we will see if I am strong enough to win. The important thing will be to stay with the best from start to finish ".

Don't you feel you have the best opportunity to win this season?

“This weekend is like Mugello because my feeling is great, in Mugello I was feeling incredible with the bike. But more times this year I was competitive, also in Portimao, but every time, I did a mistake, or I had a big problem. So, it’s difficult to say that I’m ready to win or that I can win tomorrow. But all the things are there.”

“They did a great job, compared to last year everything is better. Here in 2020 as soon as I tried to push I crashed, it was difficult, I was the slowest of the Ducati riders. Now, however, I can do what I want with the bike ”.

Any concerns about the tyres?

“It seems to me that the soft at the rear is a good combination of grip and consistency, the hard has more drop. In FP4 I started with a tyre that had 8 laps and I did another 16 and I was consistent. Here you can use full power throughout the race, playing with the grip ”.