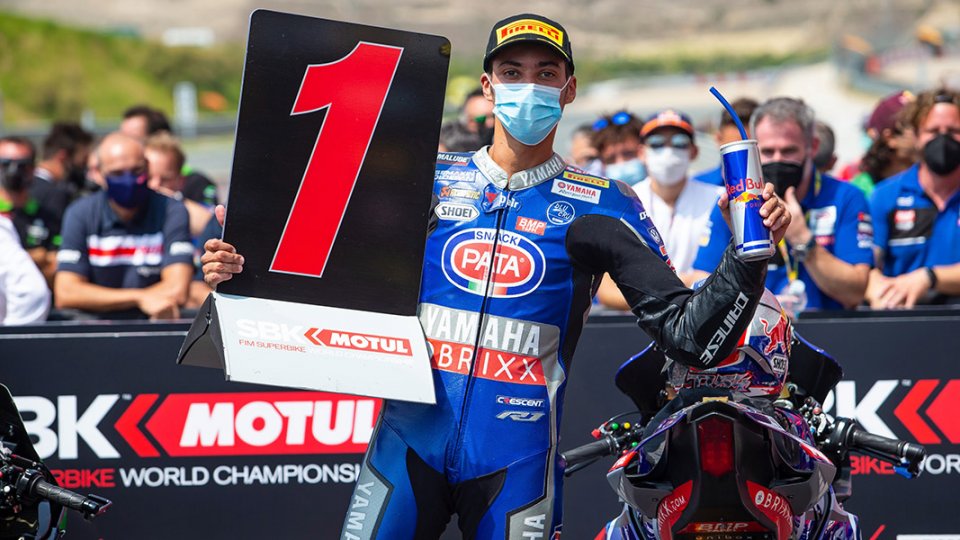 Toprak Razgatlıoğlu can leave Navarra with a big smile on his face. A track that at first seemed to be very difficult for the rider and his Yamaha R1, actually gave him a victory at the end of the weekend and the lead in the overall standings shared with Jonathan Rea. Not bad at all, especially considering that the Kawasaki rider has proven several times that he was totally on the limit towards trying to keep up the pace with his two rivals today.

Now Toprak knows he can put enormous pressure on Rea, who could sooner or later run into the classic misstep destined to upset the championship. It had already happened in Most, and today we've again seen how complicated it can be for the Kawasaki rider to push hard to maintain a leadership he shares today with Toprak.

“First of all, I have to thank my team,” Razgatlıoğlu said, “because it did an incredible job to improve my bike so much for race two. This weekend hasn’t been easy for me. We always try. But it’s always an incredible fight during the race.”

You seemed more accomodating this morning. What changed today?
“I decided that a third position would be better than a fall but, when I realized that my bike in race two had more potential, I found the motivation to try and win. I’m very happy with this result. It was important!”

Today, Locatelli also had his say, especially in the early stages.
“When I saw Locatelli overtake Redding at turn five on the first lap, I smiled in my helmet and thought ‘Okay, today we’re like hungry dogs attacking. Let’s do it!’ Thanks again to my team. I had a lot of fun in race two today, and now I have to focus on Magny-Cours and the upcoming races.”

Andrea Locatelli also collected a lot this weekend in Navarra. He missed the podium, but finishing fourth three times allowed him to score important points for the general classification and, above all, allowed him to experience the entire weekend together with the best on the track.

“It was another great weekend for us as I finished fourth three times. In today’s races, I improved a bit, but I made a mistake when I tried to overtake Redding in the first lap of race to. Then Scott attacked me, and I went a little wide. Later, in braking at turn nine, Lowes touched me, and I went off the track, and I ended up in seventh or eighth position..."

Then you had a great recovery.
“I tried to push hard to get to my standard position, which is a fourth place and, when I got there, I tried to follow the riders in front, but I couldn’t close the gap. In the end, this result is fine. I tried to set my pace and finish the race with another fourth place.”

You’re certainly growing with the team, and your consistency pays off.
“We’re working very well, and now we’re going to Magny-Cours, which is a new track for me with the R1. I already saw it last year, but I need to get some references with this bike. I think we can do very well in France too. I’m really happy with this weekend. The guys worked really well!”

Martin: “When I was 12, I risked quitting, today I won in the MotoGP”