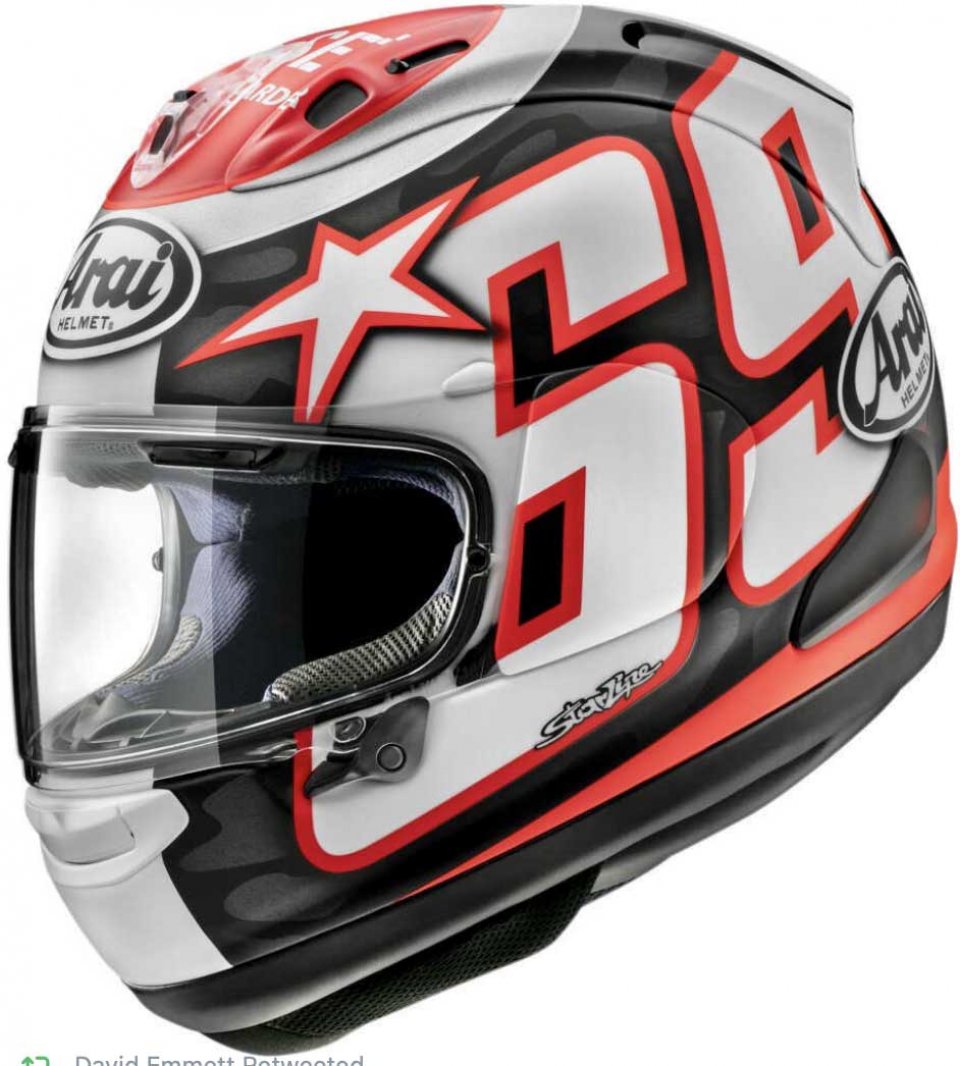 Arai has introduced a new Nicky Reset graphic on its popular Arai Corsair-X helmet. The helmet design was worn by Nicky Hayden at the 2013 MotoGP test at Valencia, and after just that one appearance, it became an iconic design. It’s been frequently requested by fans ever since, and now, the graphic will be available to the public.
The new Nicky Reset Arai Corsair-X will available to consumers soon.

According to Arai, the Corsair-X has a long reputation as one of the most-advanced, highest-quality helmets available anywhere in the world. It represents the culmination of Arai’s vast experience in helmet design and unwavering focus on rider protection. And, with features like the ingenious VAS shield mechanism, dramatically improved airflow and ventilation, and an odor-resistant liner, the Corsair-X has certainly earned its place as Arai’s flagship model.

“Sometime after Nicky’s passing, the family collectively agreed that we wanted to keep his memory and legacy alive to honor all that he had achieved and all the lives he had touched in such a short period of time - said the Hayden family - One of the most recognized things we thought that can be immediately connected to Nicky was his helmet replicas. Over the years Nicky had dozens of designs that fans around the world chose to wear while riding as a sign of loyalty and respect for him.

It is for those fans that we chose to work with Arai to continue producing Nicky’s replicas.  If it weren’t for the fans and their continued loyalty and desire for new Nicky’s designs, we wouldn’t continue.  But the fans continue to ask for Nicky replicas, so we feel compelled to make them available.

Since his passing, we have produced replicas Nicky wore in the heat of competition, and even brought back one of his all-time fan favorites – the Nicky Laguna. Now we find ourselves with a demand for a fan favorite that Nicky did wear, but was never offered as a replica.
Nicky Hayden wore the “Reset” design on his Arai helmet during off-season testing at Valencia in 2013. Photo courtesy of Arai.

The Reset was a special one-off design that Nicky wore only once during off-season testing at Valencia in 2013, symbolizing his return to a familiar ride and visualized his need to reset himself for that challenge.

At that time there was talk about making the Reset a replica, but for one reason or another, it just never happened.

Now, as demand for a new design started to build, we worked with Arai to review fan feedback and found quite a bit for the Reset design.  Then considering the current world situation, we thought the idea of the Reset was perfect timing.

Therefore, the Hayden Family and Arai will again honor Nicky’s memory and keep his legacy alive with this latest Nicky Reset replica.

We wish to thank all the fans who asked for this design and wear it proudly, keeping Nicky’s memory alive.”

The Soft front will be a good solution for the less aggressive riders who need good feedback and high grip levels at maximum lean angle. The Hard...
4 days 12 hours ago

“I don't know when he'll be back. When he feels ready, he’ll come back, not before. Then he’ll have to work on his muscles, see if his shoulder is...
5 days 10 min ago

"In the morning I was closer, but in the afternoon Fabio made another step, or rather a ‘big step’ in braking. And I was already at the limit. That’s...
5 days 3 hours ago