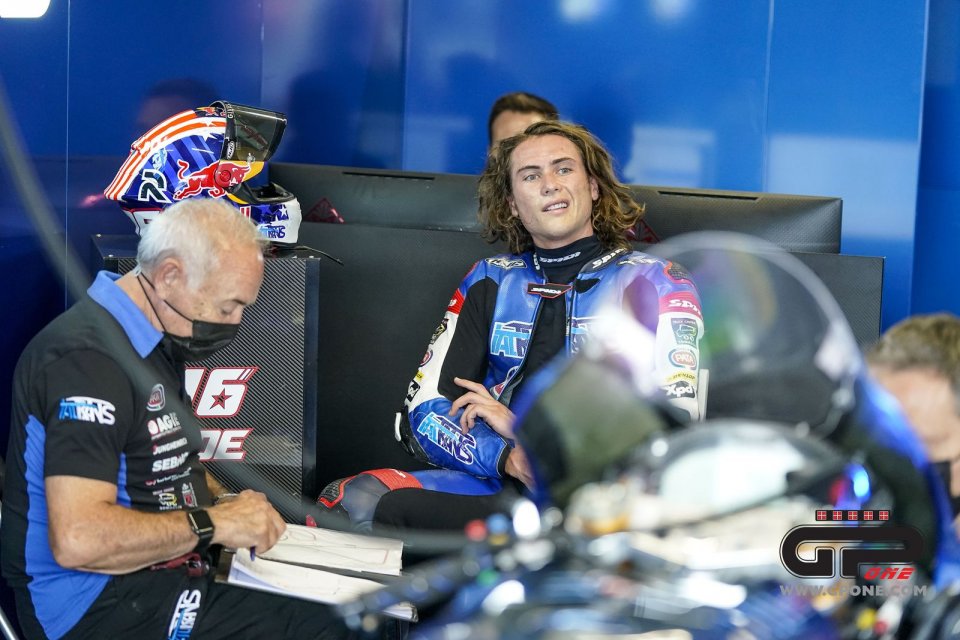 Joe Roberts has an important last name and, even if he’s not related to the legendary King Kenny, the young American rider is seen as one of the emerging Moto2 talents, so much so that he already received a call from Aprilia that, however, he didn’t accept.

Two fourth places, in Portugal and Mugello, have been his best results so far this year, but the rider from Malibu is enthusiastic about his new team, Italtrans. A team that has achieved podiums with Takaaki Nakagami, Franco Morbidelli, Mattia Pasini, and Bastianini in recent years. The secret? Probably having on board Engineer Giovanni Sandi, who we remember alongside Max Biaggi, Tetsuya Harada, and Jorge Lorenzo while, last year’s title with Bastianini, was the eighth of his career.

“It’s funny, because there have been team leaders in the past who didn’t completely trust their opinion or judgment,” Joe Roberts explained  to cyclenews. “You have to try to understand exactly what happens on the bike. Sometimes, even going to other people for advice and then giving it to your team leader. It can be a mess if you really don’t believe in him.”

One thing that obviously doesn’t happen to Joe with Sandi on the team.

“Giovanni is a legend. I would never ask him what’s on the bike. I’m confident that he has so much experience and knowledge that he can make things work for any type of rider or any type of style, with all the championships he’s won. It creates a calmness when you have someone you can trust. I mean, it’s not always perfect. There were times this year that I didn’t love the bike I was riding. But I wouldn’t blame anyone. We just didn’t find the bond that weekend. This can be hard sometimes. Giovanni helps me try to work on some areas of my riding to get the most out of it. To be more consistent on worn tires. Speed on worn tires is something that has never been my strong point. As for the work, it’s helping me be a more mature rider and stronger at the end of the race.”

Not even the language problem has been a problem between Joe Roberts and Giovanni Sandi.

“His English is not the best when it comes to communication,” Roberts admitted. “But, when it comes to bike things, he understands what I’m  saying. And he can repeat enough to make me understand what he’s saying. Whenever there’s a communication error, Robertino Pietri (the son of Roberto Pietri, Freddie Spencer’s former teammate in the USA) is there. He helps to fill the void. Obviously, Robertino speaks English perfectly and lives in America. I wouldn’t say it’s a problem, really.”