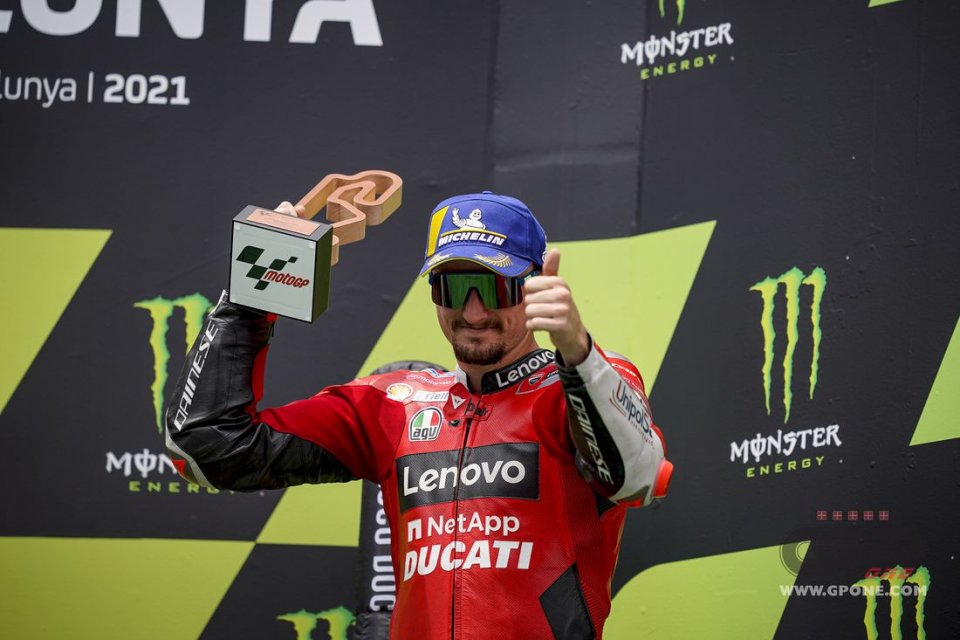 Jack Miller took home the third podium of the year in Barcelona. He didn’t do it under the checkered flag, but shortly after, when Quartararo was given a three-second penalty for having cut the first chicane. But Fabio could have (not to say should have) been stopped after his suit’s zipper opened, and after he also lost chest protection.

“We’re riders and, when you end up in a situation like that, you don’t think about safety but only about the result. There’s someone who has to watch over these things. You can’t trust us,” the Australian rider commented with his usual irony.

But Jack was very serious in the race.

“It was a long race, not very physical, different than usual. You had to be calm and patient, and I’m not the most patient person in the world,” he said jokingly. “I had some problems with the front tire in the end. I couldn’t pass Fabio, even though I tried.”

It wasn’t a big problem, due to the penalty the French rider was given.

“When I saw him go out between the first and second corners, I thought they could do something to him,” Miller admitted. “As far as I’m concerned, my plans went almost perfectly, except for when I nearly fell at turn four and then lost a gear at five, going wide. More than anything else, I suffered a lot with the temperature of the front tire. On the straight, I didn’t ride the slipstream of those in front to cool it down. In the end, it went well. I lost a few points from Zarco, but I recuperated some from Quartararo.”

Against Oliveira, however, there was nothing he could do.

“At one point, it was like a déjà vu from last year’s Portimao race,” Ducati’s Australian rider recalled. “Although, in the end, he didn’t break away, but he did a fantastic job. We all made some mistakes, but he didn’t. He was the strongest. Zarco was also particularly fast at the end.”

Now Jack is third in the championship, 28 points behind Quartararo.

“The two victories made me recuperate a lot of points,” he commented. “But the most important thing is that I feel very comfortable on the Ducati. The GP21 is fantastic. The next race will be at the Sachsenring, and I’m a bit nervous, because I like the track, but it’s a bit narrow. Then there's Assen, and that’s my biggest doubt.”

Miller: “The tyres are something we will not comment on at this point, I'm...

Dovizioso: "The riders are too young? Even older ones are sometimes not...