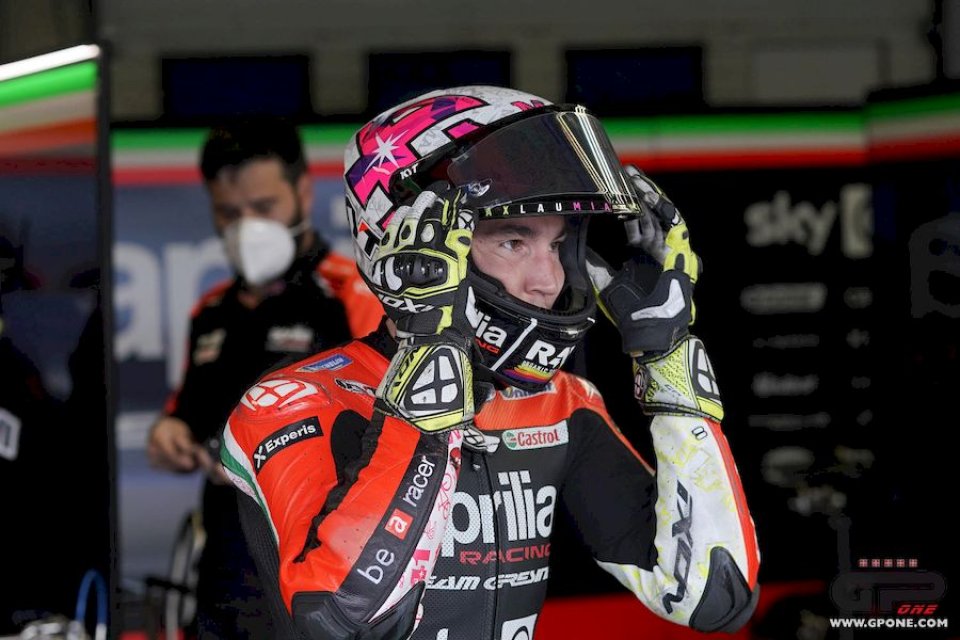 A sixth position which is certainly encouraging but which makes Aleix Espargarò and Aprilia smile only half-way and this can only be a good sign for the future. Having a hint of disappointment after such a race makes it clear that the objectives of the Noale manufacturer are becoming bigger and bigger. Today, however, could have been a good chance for the podium.

"I'm the one who wants a podium most of all - said Espargarò - But we have to remember where Aprilia started from. Today's race was a bit of a train, we all had the same pace and I was a bit behind Morbidelli, ready to fight at the end of the race. Then, unfortunately, Quartararo arrived and I struggled a bit to overtake him because he was practically stationary in the middle of the corners. I wasted time there and Mir and Nakagami passed me on the straight and I was unable to respond. I'm not happy with the position but I know I've shown good pace on another track. "

Were there no opportunities to overtake Nakagami and Mir in the final part of the race?

"No, because I had a lot of pain in my right arm, a bit of compartment syndrome. I couldn't brake well. We are all pushing hard to take Aprilia to the podium and to victory but this year's RS-GP is only a small evolution compared to that of 2020 when we were very far away, while today we are fighting with Suzuki, the world champion bike. We have to keep improving especially in hot conditions.”

Why, what's missing in high temperatures?

“I simply can't ride with my style, we're working on it but it's hard to improve so much in a category like MotoGP. We come from seventeenth place last year and now we do these performances ”.

You said you had pain in your right forearm due to compartment syndrome. Other riders have also complained about this annoyance, is Jerez a track that asks a lot?

“I don't think it's the track's fault. The truth is that MotoGP is getting faster and faster with higher power and more developed aerodynamics and we are still human, we are not machines like motorcycles. I love to train, but there is no real way to prepare for these performances. I had an operation 10 years ago for compartment syndrome but now I'm talking to Doctor Charte and maybe I will have to operate again. Tomorrow and Tuesday I will do some tests because suffering like this in Jerez had never happened to me. We have done a lot lately and today's race was 20 seconds faster than the 2020 one.”

Have we reached the limit of "endurance" for the human body?

“I don't like the word limit. I am curious to understand if with training and with some precautions, for example, my position on the bike, we can achieve something more. I'm a bit scared now, not for Le Mans but for Mugello which is a very physical track. "