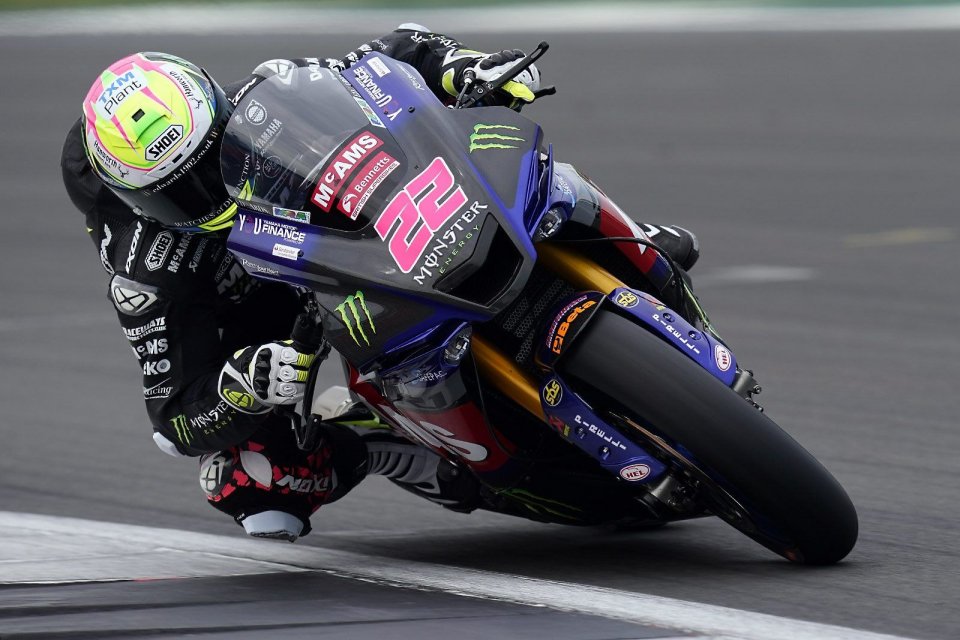 After a long winter break, in some ways unusual, and in view of the late start scheduled for the weekend of 25-27 June, British Superbike is back in action on the Silverstone 'National' layout for the first pre-season test (the so-called "BSB Test Tour") of 2021. The four scheduled sessions showcased Jason O'Halloran, with the VisionTrack PBM Ducati duo right behind, and the constantly improving BMW in the hands of Kyle Ryde and Xavi Forés.

After a 2020 season that saw him finish in second place, with his first win in five years, the McAMS Yamaha rider started off with the right attitude. Despite the low temperatures and a few drops of rain, the Australian set the best time of 53.469s at the end of the first day of practice, a time obtained in the final minutes of the second of the four sessions (already at the level of the track record set by himself in 53.342s !!) using the new SCO tire at the rear, during the afternoon he then concentrated on the development of the 2021-spec engine, while remaining the undisputed benchmark in the ranking. The 2640 meters of the "short" circuit at Silverstone are perfectly suited to the characteristics of the YZF-R1, but Jason O'Halloran wanted to make a statement: competitive on the flying lap and setting regular pace with a series of 54" laps in Session 3 and 4. Not much luck for his team mate Tarran Mackenzie (tenth), the victim of two harmless crashes, one of which prevented him from taking part in session 4.

Ducati workaholic and strong over distance 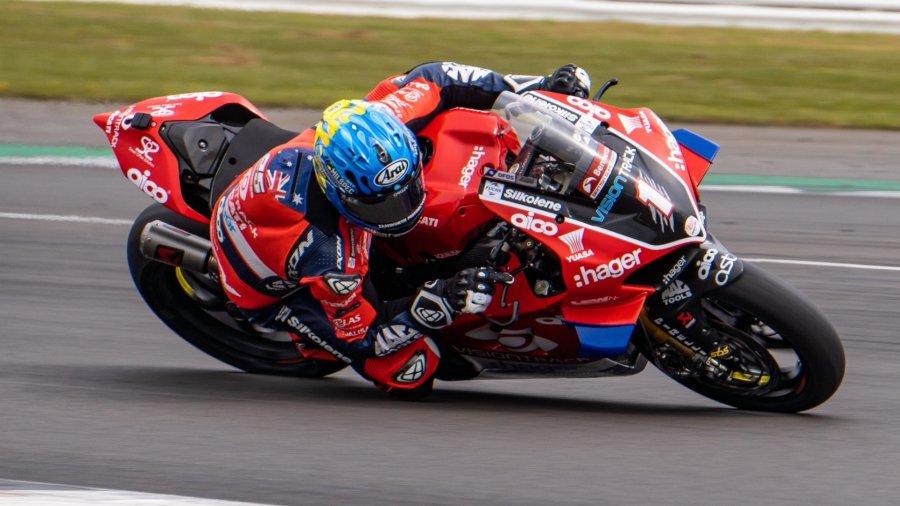 The benchmark in the top class of the UK domestic championship since 2019, the Panigale V4-R is now a certainty from every point of view. With both confirmed in the renowned VisionTrack PBM Ducati team, Josh Brookes and Christian Iddon proved to be absolutely competitive. While the reigning champion (with the number #1 plate on his screen) finished in second position with a time of 53.827”, 358 thousandths behind his rival and without ever running more than 8/10 laps, the man from Stockport focused more on the distance: long-runs of 24 laps in session 2, 25 in session 3 and 15 in session 4, with excellent results around 54". Nevertheless, he still managed to notch up a  positive third place just 74 thousandths from his team-mate. In eighth position was Tommy Bridewell (Oxford Racing MotoRapido), looking to get back up to the top after a rather negative period. 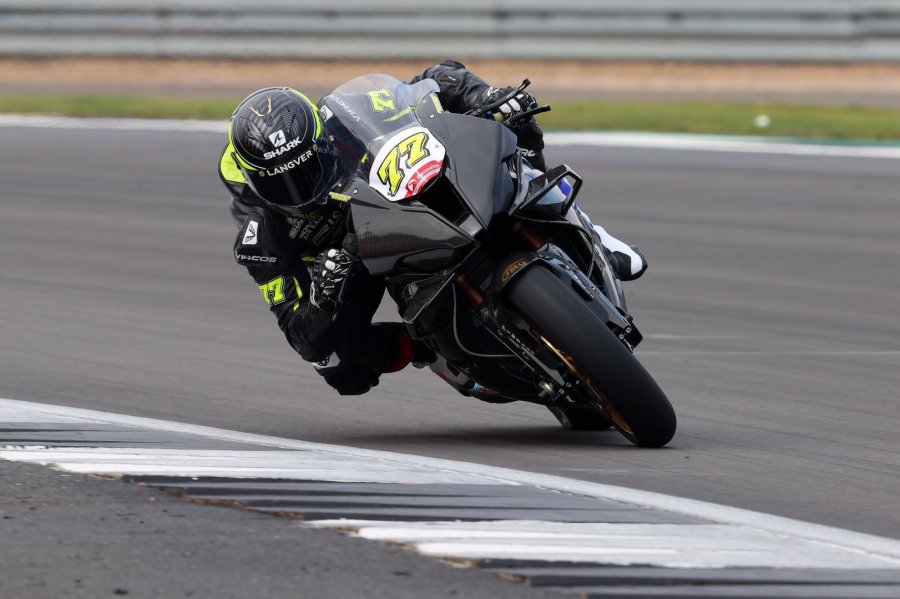 For so long a bike with unfulfilled potential, the much-awaited M1000RR made a positive debut in the UK. Although this is only the opening day of tests, there were two in the top part of the standings: Kyle Ryde (Rich Energy OMG Racing, pictured above), fourth, ahead of the returning Xavi Forés (FHO Racing), both four-tenths from the top. Further back Peter Hickman, in 18th place on the second BMW of the newly formed Faye Ho facility, while the two SYNETIQ BMW by TAS in 12th and 14th position respectively with Danny Buchan (today 28 years old) and Andrew Irwin. Performance aside, the teams linked to the German manufacturer notched up useful mileage for the development of the latest generation model.

The result of the short length of the track, as well as of a technical regulation that balances out performance between the various bikes, the combined standings produced 14 riders in just eight tenths. A surprising Danny Kent hoisted himself up to sixth position on the Buildbase Suzuki GSX-R 1000, demonstrating the Gixxer’s positive feeling with Silverstone (despite a crash in the first sessions and technical problems in the fourth ), Glenn Irwin (Honda Racing UK) was seventh, Gino Rea (Buildbase Suzuki) ninth. The Ninja ZX-10Rs are much further back: 11th Ryan Vickers (RAF Regular & Reserve), in 15th and 20th position Lee Jackson and Rory Skinner of FS-3 Racing. Japan’s Takumi Takahashi (Honda Racing UK) went quite well in 13th on the CBR 1000RR-R, 22nd his compatriot Ryo Mizuno. BSB will again be in action today for the final four testing sessions. 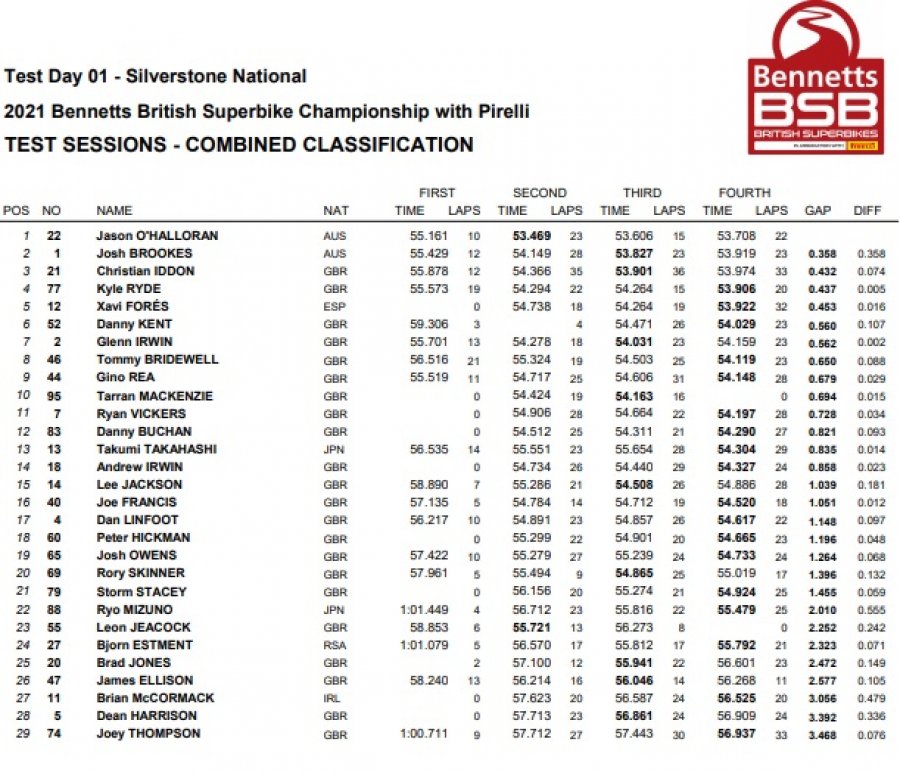