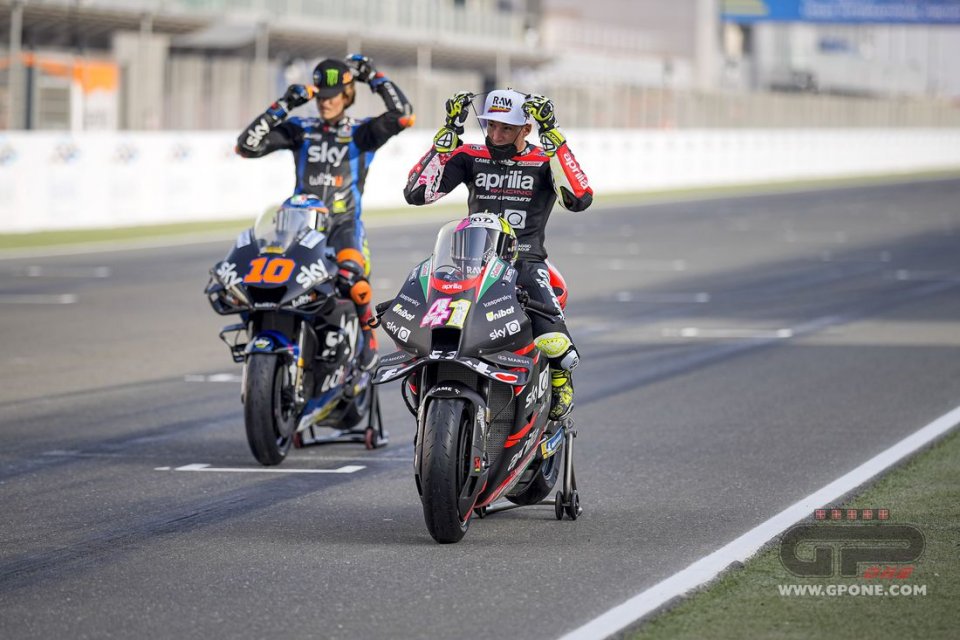 In 2022, a new five-year cycle for MotoGP will get underway. In recent months, teams and manufacturers have been signing new agreements with Dorna and only Aprilia is missing. There is nothing to worry about however, the announcement will come shortly and the Noale manufacturer will have its own factory team from next year, a structure therefore separated from that of Gresini, as it was until today. Which means that the number of bikes on the track will increase, going from the current 22 to 24. In Ezpeleta's intentions, the plan was for all the manufacturers to field 4 bikes (2 in the official team and as many in the satellite ones) but this will probably not be the case.

Right now, in fact, the Gresini team is searching for the bikes with which it will race in the next few years and pressure on Ducati started some time ago. The Avintia Esponsorama team, in fact, has already announced it will be abandoning the premier class at the end of the season, leaving two Desmosedici free, which are tempting to the Italian outfit.

As Carlo Merlini told us recently, Gresini Racing has been looking in several directions but the one that goes through Bologna at the moment is the most likely.

Even if it is too early to talk about riders, they already have them lined up and they are both Italians. Fabio Di Giannantonio had already signed a contract with Fausto to move up to MotoGP in 2022 and alongside him he could find Enea Bastianini, thus reforming a pairing already seen at the time of Moto3. It would be the ideal line-up, with a rookie and a rider with already one year of experience in the premier class.

It would be a pity however not to take account of VR46. Valentino's structure seems ready to make the leap to MotoGP, but a lot of dosh will be needed. For Rossi, attracting sponsors has never been a problem, but in these times all companies are tightening their belts. Once the budget has been found, then it will be time to think about the bike.

Given the Doctor's relationship with Yamaha, this would be the most obvious choice, but Petronas sort of got in the way. The Malaysian giant has started its collaboration with Iwata in the best possible way and it seems that on both sides there is the desire to continue together, also because there are no alternatives. So along comes Suzuki, with a bike that would be attractive for both Petronas and VR46, but one that is not quite there at the moment. For years now we have been talking about a satellite team for the Japanese manufacturer but, every time, something happens to put a halt on the idea. This time it was Davide Brivio’s departure; Shinichi Sahara, interviewed by GPOne recently, admitted that he was still trying to convince the top management of the company about the need for another 2 bikes. Considering that we are at the end of April (and that things will have to be decided pretty quickly) it seems unlikely that in 2022 we will see four GSX-RR bikes on the track.

All that remains is Aprilia, which is no longer a second choice. Because the RS-GP is rapidly improving, as demonstrated by Aleix Espargarò's results in the first races, and because at Noale they are one step away from involving Dovizioso in the project. Romantically speaking (for what it's worth in a world where passion is fundamental, but money even more) it would be nice to see Valentino close a circle, starting his team's MotoGP adventure with the same bike he began his career as a rider with. From a marketing point of view it could be a winning choice, perhaps with a collaboration that could extend beyond the track, considering that VR46 is also a company that produces merchandising and that in the Piaggio Group portfolio there are brands such as Vespa and Moto. Guzzi, known and envied all over the world.

For the moment these are only rumours, but the next few weeks will be fundamental to put into place the final pieces on the MotoGP grid for the next few years.