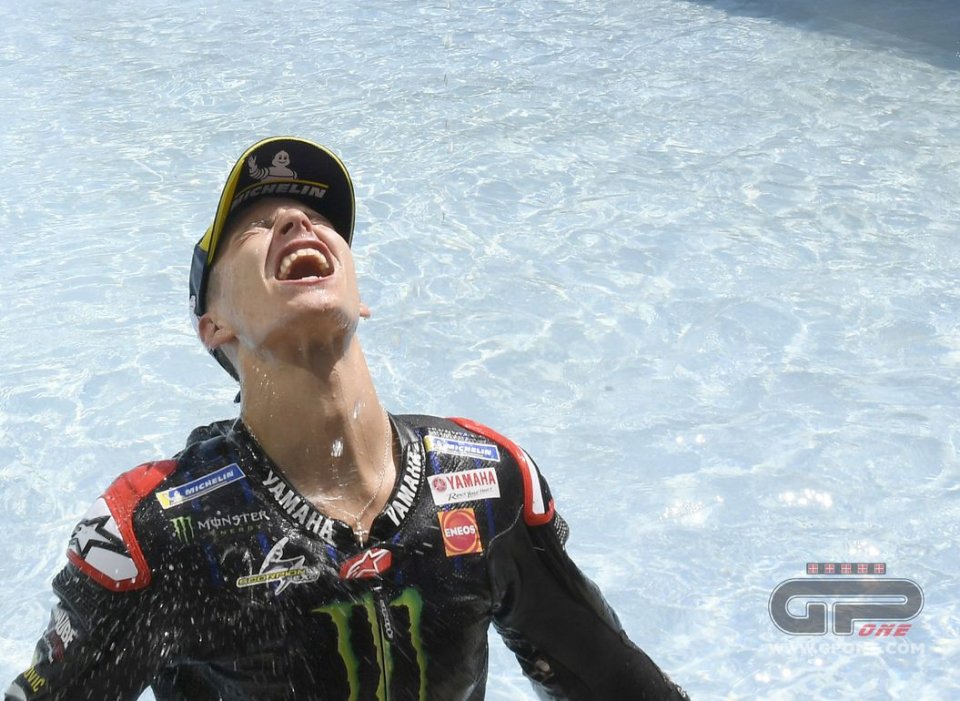 Fabio Quartararo, who came out of the press conference reserved for the top three riders on the podium in Portimao, found his entire team waiting for him and to celebrate he took a dip in the swimming pool located at the entrance. The Frenchman deserved to cool off a bit after setting the world alight in a race in which he showed all his class. For him it is the second consecutive win of the year following the one two weeks ago in Qatar and, as at the beginning of last season, he is leading the championship.

“I also won two races last year, but now the situation is completely different - he explained - After those two victories in Jerez I found myself in a new place for me, I thought I could stay there, but the other riders worked to catch me. Now I'm just thinking race by race, in the winter I worked well with my psychologist, I did some exercises that were useful for me, they allowed me to stay calmer. "

Have you improved more yourself or more the Yamaha?

“The M1 has taken a big step forward from 2020 and mentally I feel stronger. Last year, at Aragon, I lost the chance to fight for the title, I'm not saying that I felt frustrated but I saw everything black. Now, however, even if there is something that’s not going well, I focus on what is OK ".

In the race everything seemed to go well…

“I didn't expect that sort of pace in the middle of the race, but here you feel a big difference when you have a full tank of fuel. Rins surprised me, I didn't think he could keep that pace. I kept pushing, I wanted to get away from him and I expected him to make a mistake, as he did”.

Did you feel the pressure when he was behind you?

“No, if anything it motivated me. I was focused on riding, I controlled the gap, maybe I would have felt him in the last few laps ".

Now you are leading the World Championship, who do you think will be your most dangerous rival?

“Difficult, I could name at least 6 or 7 riders. For sure Mir will be very consistent and has the experience of winning the title last year, but if I look at today's race I say Bagnaia. Like me last year on this track he struggled and now we are both at the top. "

Are you confident for the next races?

“I feel like I'm back in 2019: this weekend I used an identical set-up to Qatar, I hardly touched it. We are talking about two very different tracks and the M1 works well, which means it will be competitive everywhere. Above all, I feel better with the new frame, I can be fast because I feel the front and its movements well, when I don't have that confidence it's a disaster. "

What do you think of Marquez's race?

“I expected it, he did an impressive lap in qualifying. He finished just over 10 seconds behind me at a circuit that demands a lot physically. Now he knows the sensations of the race once again, he will be fast in Jerez ”.