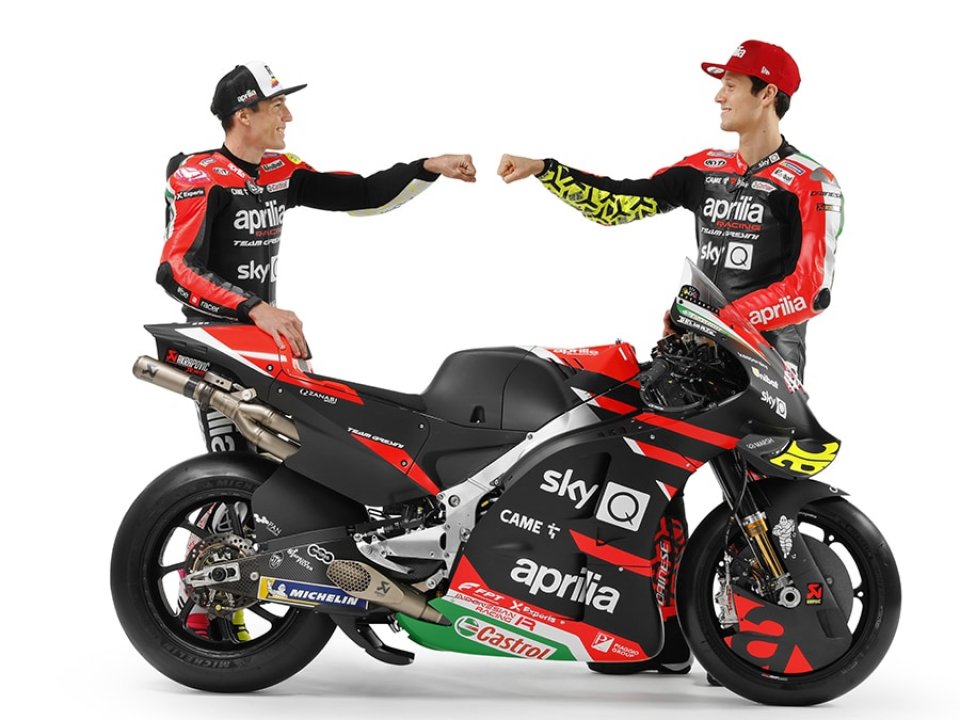 Right on the bell, seeing as the first MotoGP tests of the season will begin tomorrow, Aprilia has also presented its bike for 2021. The new RS-GP was unveiled directly from Qatar, on the Losail track, with the whole team surrounding the bikes and riders. A demonstration of team solidarity, which Aprilia had already given on the occasion of Andrea Iannone’s sentence, and of closeness after the death of Fausto Gresini.

The first images of the presentation were in Fausto’s honour, a farewell from Aprilia which then materialized also in the words of the riders and the top management of the team.

These included Massimo Rivola, who also analysed the upcoming season and the team's goals for 2021.

"Fausto had been in Aprilia since the beginning of this project - said Massimo Rivola - We will use his tricks to go faster on the track and make him proud. In this first phase of the championship we don’t want to look at the others but only at ourselves. consolidating our undoubtedly positive trend. Aleix has a very important task, to lead the team and not be betrayed by the frenzy of getting results. Consistency and work will give him the satisfaction he deserves. Lorenzo will have to grow and learn a lot, starting from the circuits. An extraordinary talent scout like Fausto believed a lot in him, I'm sure he will give his all to repay the trust. The team is solid, ambitious and realistic. Everyone knows that only by keeping our course is it possible to continue growing, getting the Aprilia into a condition to fight for the positions that matter, also in MotoGP ".

Lorenzo Savadori, who thanks also to Fausto Gresini, has moved in just over a year from being an SBK rider without a seat to a MotoGP starter, is particularly excited. For Lorenzo, after the races at the end of 2020, a sensational opportunity has now opened up and he will have to make the most of it to be able to stay in the top class.

"I'm really happy to be here - he said – and I thank Aprilia for this opportunity, I worked really hard during the winter to get ready. Of course I also want to thank Fausto Gresini for believing in me, I hope I can do my best for him and make him proud, he was my manager but also my benchmark. Last year's tests and races allowed me to start building my confidence with this bike and with these tyres, but it was just a starting point with a lot of margin for improvement. I will try to transform the grief generated by Fausto's death into positive energy. His determination and his teachings will accompany me in this new phase of my career ".

And for one rider in his first experience as a MotoGP starter, there is another who has notched up a lot of kilometres in the top class: Aleix Espargarò. The Spaniard is in his twelfth season in the category, his fifth with Aprilia. With all this experience and the new RS-GP, how far can Aprilia go?

"It may seem banal but I'm always excited at the start of a new season - he said - I'm about to start my fifth with Aprilia, a team that is now a second family. In fact, I can't wait to get back to working with them. The first contact with the new RS-GP was positive, the guys worked hard during the winter but there is still a long way to go. A demanding and busy championship awaits us, where physical and mental fitness must always be at their highest levels. I'm more ready than ever. "

Romano Albesiano spoke specifically about the technical improvements made by Aprilia during the presentation.

"Thanks to the work this winter and the great effort of the racing department, we know we have made a big step forward that is now awaited comparison with our rivals. Our growth is clear and this gives confidence to everyone involved, our engineers have brought to the track a further evolution of a project that has great potential yet to be expressed. We intervened on all aspects: from the visible ones, such as the new aerodynamics or the carbon swingarm, to major interventions on the chassis, engine and electronics. The package that we will bring to the track in the initial phase of the season will then be further developed according to a work program that has already been substantially defined.”