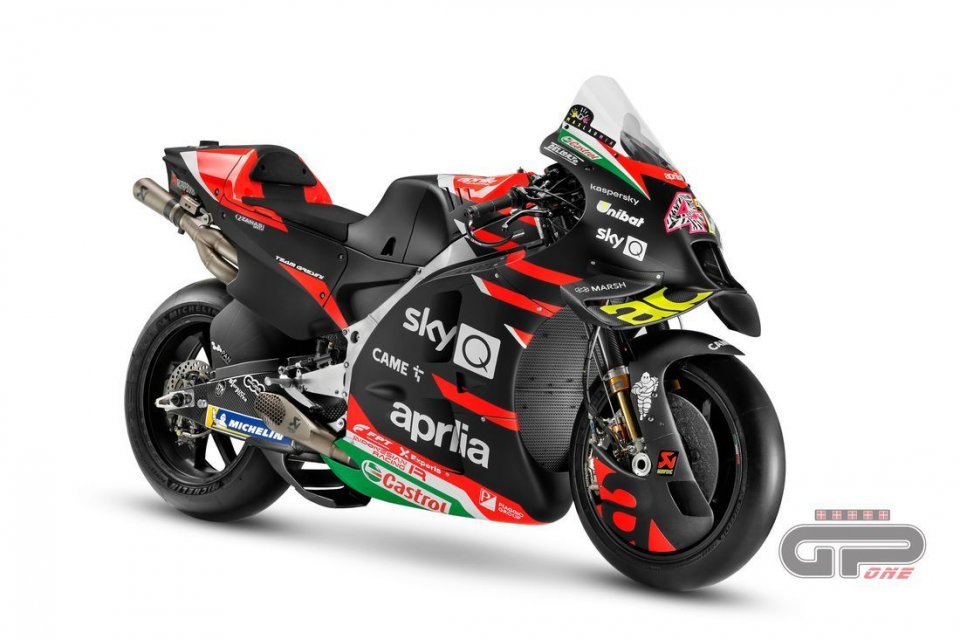 The 2021 Aprilia RS-GP had already made its debut on the track in the Jerez de la Frontera tests where it was the fastest over three days in February, Aleix Espargaro going better than the KTM ridden by Daniel Pedrosa.

The Noale manufacturer has given a taste of what its ambitions in MotoGP will be: the intention is to abandon the role of Cinderella in the premier class, and get a lot closer to the other manufacturers, despite having the skimpiest of budget (not even one-fifth of what Honda spends every year, which is 100 million euros!).

The 2021 Aprilia RS-GP was unveiled in the Losail pit lane: it is a completely new bike that represents a clean break with the MotoGP machine that raced last year. As it is the only team that still enjoys concessions, Aprilia Racing has decided to go on the counterattack by trying to benefit from the constraints that have been applied to the other manufacturers, presenting a two-wheeler that is decidedly different from its predecessor.

Team principal Massimo Rivola can be confident of the work done by the staff headed by Romano Albesiano. Major improvements have influenced every aspect of the 2021 Aprilia RS-GP: chassis, aerodynamics and engine.

The experience of last year had already given a clear direction to the ambitions of Noale, but the pandemic due to Covid had blocked the developments that were planned in the Veneto factory. It is not surprising, therefore, that over the winter Aprilia made a double somersault with a total U-turn in orientation and philosophy.

It must be said that the new matt black livery is already striking, giving the bike a gutsy look, but nice colours do not translate into performance. So let's start by saying that the engine has a completely new cylinder head that introduces an innovative concept that will be developed later.

Meanwhile, the 4-cylinder 90-degree Vee unit, on which Luca Marmorini, a former Ferrari engineer, has collaborated, has benefited from a significant weight loss compared with its toughest rivals that will make the bike more agile in transients, as well as benefiting from a power increase in the entire curve of use and not only at maximum speed.

Everything else has been thought around the engine: the frame is a traditional aluminium perimeter that adopts carbon pieces in the engine mounts in search of more rigidity. The rider is also seated in the saddle in a new, more central position that favours the displacement of masses and contributes to an increase in aerodynamic efficiency.

Marco De Luca, head of the 2021 RS-GP project, has paid particular attention to drag reduction and fluid dynamics inside the fairing, with the clear intention of reducing the radiant mass thanks to an easier heat extraction from the 4-cylinder unit.

The aerodynamics, developed in the Toyota wind tunnel in Cologne, are not only defined by the front wing that made last year's MotoGP bike instantly recognizable, because further intervention was made on the winglets to help increase downforce and, in particular , to reduce the wheelie effect in acceleration, making the intervention of the control electronics with anti-wheelie less invasive.

At the rear, the new carbon swingarm stands out, representing another leap in quality, and not only aimed at lightness. The suspension geometry has changed, allowing for more extreme packaging: on the 2021 RS-GP a major effort has been made in an attempt to make better use of the Michelin tyres, in the hope of making them work in the right window of use to stabilize their behaviour over the entire arc of the race, without major drops in performance when wear is accentuated.

Like Ducati, Aprilia also has a system that collapses the rear suspension during launch control and not only. The holeshot is a mechanical device that they already adopted in Noale at the end of last season: the one mounted on the 2021 RS-GP is an advanced version that can open up new developments in the solution to arrive at a proper trim adjuster.

Also new is the rather flashy rear and this gives the impression that it can house a mass-damper for the vibrations, as on the Desmosedici. In short, in Noale, despite their limited means, they are aiming to set the bar higher with a pinch of justified ambition.

To discover the true limit of the bike, a top rider would also be needed to help the team grow faster, but for the moment the team is forced to make do with the qualities of Aleix Espargarò. Alongside the Granollers rider will be Lorenzo Savadori who will have the opportunity to take part in his first full MotoGP season. One step at a time…