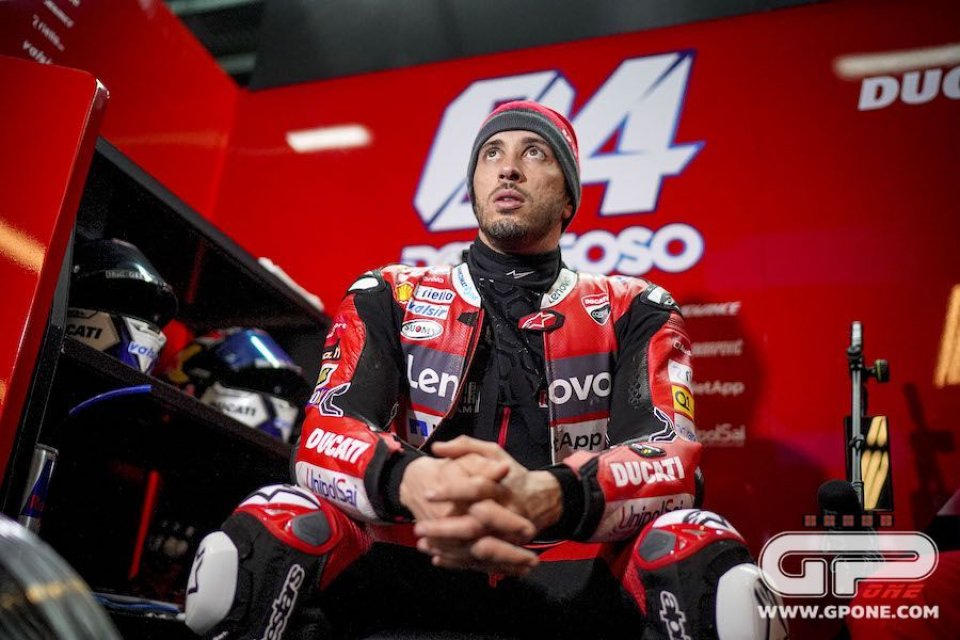 Andrea Dovizioso's might be a "last resort" world championship and yet, at the end of each race weekend, the Ducati rider is always there, holding on to the top positions by his nails and to a world title dream which  - as we know - would have a massive importance especially after the separation from Ducati. Today Andrea started from 13th on the grid after yesterday's agitated Q1 and the resulting controversy and but finished in 7th place. Before this GP, the points gap to the world championship leader was 18 yet today it’s 15. The gap changes and the leader also changes as Quartararo, in the midst of a crisis and third from last in Aragon, handed over the lead to Joan Mir, who is first without ever having won a race.

“In this championship you can never know what will happen - said Dovizioso - The races never respect the forecasts in this 2020, also because if I were to give importance to the results of free practice, I probably wouldn't even go out on the track on Sunday. I know I have some possibilities but to win this world championship we have to take some steps forward. Today I survived a difficult weekend and not everyone can do what we have done these days. However, our opponents are really strong and the Suzuki has great consistency ”.

“Mir hasn’t won a race but he has been the strongest of all so far. In the end, what matters is to score points and he is very strong at the end of the race and manages to score a lot. Today practically nothing has changed for the championship, this is a strange year you just have to look at your own garden and try to bring home as much as possible in each race, today we succeeded”.

Quickly going back to the controversy with Petrucci and Ducati in yesterday's Q1: did you have the opportunity to speak with Danilo?

“No, but now we will return to Italy together, on the same plane, and we will have a chance to talk. Maybe we should organize parachutes (laughs, Ed.). Danilo is a good guy and I've had a lot of pleasure helping him over the years and I'm not a bitter type, but in certain situations you have to use your head a bit more "

Today you started with the medium tyre, while others chose the soft. Could you have done better with that compound?

“Maybe yes, but this weekend we destroyed the soft with the cold. We did not understand why, even if perhaps the reasons are to be found in the maximum lean angle: we mark them a lot at that moment because we do not slide in the middle of the corner as Yamaha and Suzuki do. We work with stop & go, the tyre cools down and then it doesn't work well, in fact in some corners I lost a lot. Today I took home the maximum for the position in which I was starting, even with the soft I could have at the most done 1-2 positions better. It will be important to analyse the data of Zarco who raced with the soft to better approach next weekend ”.

Here in Aragon, in 7 days, another chapter of this strange world championship will take place. What can you improve on?

“This weekend we suffered a lot from the cold, practically we started working in FP4 and so I hope to have more sessions available and higher temperatures. We have always come off worse from the double race this year but in this case I think I have more room for improvement than the others, especially in qualifying because today I was not so bad on the pace, it is the starting position that affected the result a lot. I lose too much in 3 corners and this means that the manoeuvre is wrong. This reassures me in view of Aragon2 ”.

In addition to Donington Park, the BSB riders will be in action in three further practice sessions at Silverstone, Snetterton and Oulton Park before...
4 hours 2 min ago

In Qatar, the first day of the Sky VR46 Avintia team rider in a selection of images on and off the track
4 hours 24 min ago

“The Formula 1 is a bigger organization. Everything happens faster, but the riders have the same attitude. Alonso returned here because he’s hungry...
1 day 3 hours ago