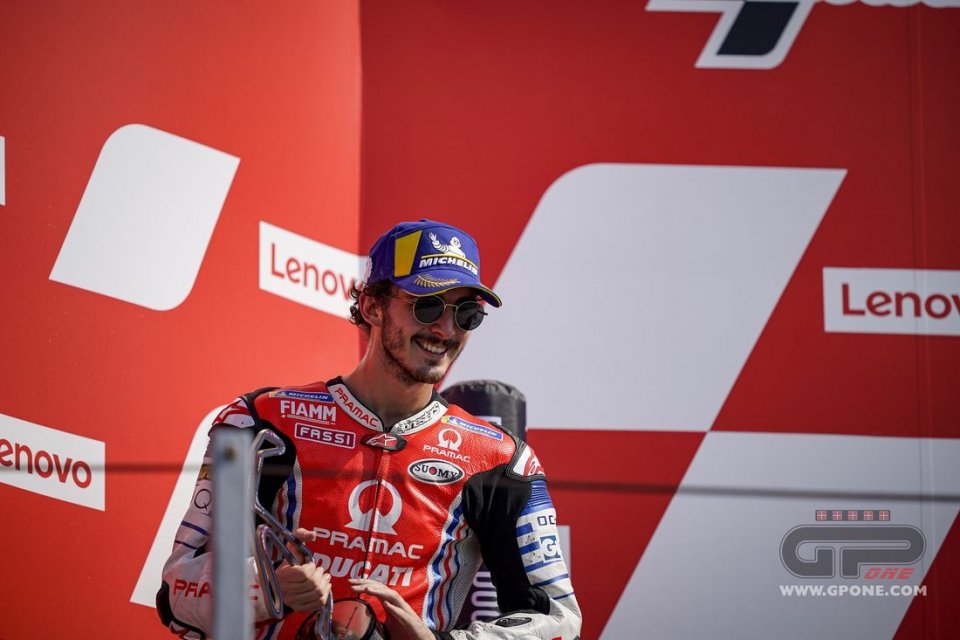 The news had been in the air for a few weeks now, but the official announcement only arrived this morning: Pecco Bagnaia will wear the colours of the official Ducati team in 2021. "I was the only one who didn't know anything" jokes Pecco, with whom we spoke a few minutes after the announcement.

"I only learned about it after the Barcelona race - he tells us - I had always hoped for it, but never asked for anything. I preferred to wait and deserve it on the track”.

What feeling do you get knowing you are in the factory Ducati team?

“It has a particular charm, it is an Italian brand and very prestigious, it has always been my dream. I have been very happy these days”.

When did you start thinking it might be possible?

"At the beginning of the season I didn't think about the factory team, also because that place would belong to Dovizioso, so I wanted to give my all to deserve reconfirmation in Pramac and a factory bike also for 2021. Everything was going well, but I was injured at Brno. I was already browned off after losing the podium at Jerez due to a technical problem, I wanted to prove that I was fast and instead I hurt myself, while Zarco had done an extraordinary race in the Czech Republic. Then, in Austria, there was Dovizioso’s announcement that he was leaving. I felt I was missing the chance, but fortunately I was able to return at Misano and everything came easy. I think that was one of the reasons why I deserved this place”.

You have often said that as a child you were attracted to your uncle's Ducati, was it a sign of destiny?

“He had a 996, it was beautiful. I loved it when it arrived, it had a dry clutch and it made a completely different sound from all the other bikes, I got very passionate about Ducati. I have also always cheered a lot for Valentino and when he went to Ducati I really hoped that he would be able to win, it would have been a dream”.

"In Ducati 10 years after Valentino, but now the bike can win in every race"

Ten years later, you will be in Rossi's place in that team…

“Perfect (laughs). But now it's a completely different thing, our bike allows us to win every race while it wasn't like that with his. I had already done a miracle by reaching second place at Misano, the level of our bike is much higher. I think I will have a different job than his and the only thing to do is to keep fighting as I am doing now and not make any more mistakes, like last Friday in Barcelona, ​​to always stay ahead. "

Did Rossi already tell you anything after this announcement?

"We haven't been able to talk yet, but we're all going out to dinner together tonight for a toast."

In Ducati there was not only Valentino, but also great figures like Stoner and Capirossi ...

“The Ducati fans are very nostalgic towards riders like Casey or Bayliss, I will have a very important role and I will have to honour it”.

Do you think being in an official team will give you special responsibility and pressure?

"It's certainly something different, you see it with Dovizioso and Petrucci who are often targeted by everyone. It will certainly be an extra responsibility, but sooner or later you have to face it. Marquez had it in Honda, Rins and Mir have it in Suzuki, Quartararo will have it, it's a normal thing to get used to. Then it depends from rider to rider, some may be bothered by it while for others it is an extra motivation”.

What is it for you?

“Knowing I'm in the factory team pushes me to improve. It's something new, we'll have to see what happens after the first few races, but it's certainly a source of pride”.

Did this change come at the right time?

"In my opinion, yes, because I have grown a lot since last year and have taken a really big step forward. I just have to make concrete what I'm doing and be constantly fast to be able to think about fighting for the title, which is the goal of an official team. "

"I really believe in myself and I like difficult challenges"

In the middle of last year, when things were not going the right way, if you had been told that you were going to join the factory team would you have believed it?

“I would have hoped more than believed (laughs). I am a person who has a lot of self-belief and I really like difficult challenges. Last year it was a bad period, I was always on the ground as soon as I tried to push, but thanks to my team, to Christian, to Francesco, to Tommy (Gabarrini, Guidotti and Pagano, crew chief, team manager and telemetry technician) and to all the other guys, I managed to mature and that is now bringing results. It is also thanks to them that I am so strong now”.

Will Gabarrini and Pagano follow you in the official team?

"I really think so, now that we have dialled in together (laughs)".

"The Pramac team helped me not to lose faith in myself, I would like to give them a victory "

What will remain of the Pramac team for you?

“First of all I want to say that it is a team at an impressive level, it doesn't lack anything to be an official team. I feel good, Guidotti and Paolo Campinoti give a lot of serenity and there is a lot of harmony between everyone. They helped me a lot not to lose faith after a difficult season, Francesco has always been close to me. I am honoured to have been able to know them”.

Was your growth only technical or was it also personal?

“I realized how much your head makes a difference. Last year I was always down, it didn't take much for me to lose confidence, but now I always try to be positive and serene and for this I also have to thank the people who are close to me. For example, Carlo (Casabianca, the VR46 tuner, Ed.) is always very hard on us riders, but he knows how to say well done when you deserve it. He is a perfect person for me, someone who needs to be told off when needed but also to be told well done. In addition, I have to thank all VR46, Uccio, Barbara, Albi, Gianluca, Valentino himself, and then my girlfriend and my family. They are all fundamental people for my serenity”.

In the official team, Jack Miller will follow you.

“He's the one who is taking me with him (laughs). We get along well together, he's a good guy and then he goes fast, which is key to growing. I'm happy, the relationship between teammates in MotoGP is different from that in the other classes, but having someone like Jack in the garage can help me."

Will you give yourself a gift for this promotion?

"It would be to try to win a race before the end of the year. In my opinion the team deserves it, we all deserve it. Any track can be good to do it; this year's bike has been competitive even on tracks where it usually struggled. Already at Le Mans there could be an opportunity ".